July 7 was the start of the running of the bulls in Pamplona — an exhilarating test of one’s Darwinistic chops (Washington Times caption of the below photo: “Christopher Horner is partially seen in the lower left-hand corner, pushing a slower Spaniard out of the way at the running of the bulls”). It is a fitting time to examine President Obama’s persistent running with the bull about a supposed Spanish economic miracle. 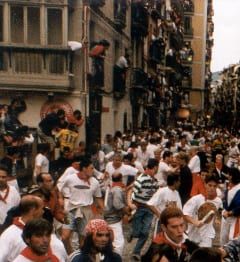 Horner at the Running of the Bulls in Pamplona in 2000.

El toro’s most recent charge came this past weekend in Obama’s weekly radio address. In it, he left no doubt that he is either an extremely slow, stubborn learner, or he cares not a whit about how the drama he is scripting will play out.

Recall that, on eight occasions in the past, Obama hailed Spain as his model for the centrally planned “green” (energy-constrained) economy of windmills and solar panels he vowed to impose on us along with health care “reform” and spreading the wealth around. Yet as of his recent Oval Office pitch for the same agenda, Obama no longer points to any such examples when insisting on what he calls “the right thing to do” even if you doubt the global warming claims that used to propel this tenet of the modern statist.

The new argument is laid out in the Sunday Washington Post headline: “Obama: Solar power will create jobs.” We see that despite public outrage over Washington, D.C., boondoggles, cost is not a consideration when ramming through “investments” in what Obama wrongly and risibly calls “new technologies;” i.e., wind and solar power:

President Obama announced the award of $1.85 billion in loan guarantees Saturday to two solar power companies that he said will create thousands of new jobs.

In his weekly radio and Internet address, Obama said the money from the Energy Department will help the U.S. transition to a “clean energy economy” that creates hundreds of thousands of jobs in the future.

Abengoa Solar, a unit of the Seville, Spain-based engineering company, will receive a $1.45 billion loan guarantee to build a solar power plant in Arizona that will create 1,600 construction jobs and 85 permanent jobs, according to White House documents released in conjunction with Obama’s address.

So the Spaniards’ enterprise carries a per-job cost of $860,534, even though 95% of those jobs are temporary (we learned they likely all are in the same way that census jobs are: the job disappears when the federal support ends). Wow. And proponents even embarrassingly boast that solar power requires more workers than any other energy source. This could get expensive.

Also using White House figures, if you assume the actual cost to the taxpayer for the loan guarantee is 10% of the loan, there is a per-job subsidy of $86,000.

This project brings to life the reason that both the president of Spain’s renewable energy association and the communist trade union called Professor Gabriel Calzada “unpatriotic” for revealing that these schemes are uneconomic drains: Spain needed the United States, Uncle Sucker, to buy into the scheme just to keep them afloat, as I detail in Power Grab.

The administration’s latest line in pushing this waste — it has merit because it would produce jobs — is vacuous. Everything you rob from Peter to pay Paul to do “creates jobs.” That’s not an argument. You can dig ditches and fill them back up for less. And that, believe it or not, is less economically harmful by far, as also detailed in Power Grab.

But the entire purpose of the renewables mandate and subsidy schemes Obama wants is to force you to buy electricity for a higher price than you would otherwise. These schemes, unlike ditch-digging, exist only because of crony capitalism. But-for heavy-hitting wind and solar rent seekers like GE — and before them the unfortunate Enron tag-team with BP to pioneer the field — there would be no “market” for these energy sources abandoned as soon as we liberated the hydrocarbon. All of these projects also bring increased debt to underwrite the make-work, which through opportunity cost kills a multiple of the jobs “created” because the private sector creates jobs much more efficiently than the state.

The distinction is that state-sponsored ditch-digging does not necessitate higher energy prices, which chase other, largely manufacturing jobs to less hostile environments. But windmill and solar panel schemes did chase, e.g., European steel jobs to India and other exotic locations like Carroll County, Kentucky (North American Stainless, owned by Spain’s Acerinox). In short, you can make windmills from steel, but you won’t make steel using windmills.

Why the mandates? As the Institute for Energy Research found, despite receiving 100 times the subsidies of oil and gas, those favorite energy sources of the left (why might that be?), wind and solar, still can’t make it.

Federal Subsidies for Renewable Power Compared to Other Generating Technologies

While these are some of the more direct subsidies that wind and solar receive, there are many others at both the federal and state level, such as the accelerated depreciation mentioned above. The EIA did a study comparing the federal subsidies received for electric generation by fuel type for fiscal year 2007. [“Federal Financial Interventions and Subsidies in Energy Markets 2007“, Table 35 (pdf)] They found that wind and solar received almost 100 times more in subsidies than oil and natural gas plants on an electricity production basis.  Total federal subsidies for electric production from wind power were $23.37 per megawatt hour (in 2007 dollars) and for solar power were $24.34 per megawatt hour, compared to 44 cents for traditional coal, 25 cents for natural gas and petroleum liquids, 67 cents for hydroelectric power, and $1.59 for nuclear. These subsidies include the federal production and investment tax credits, but do not include accelerated depreciation (a five-year tax write-off) and state subsidies. Energy subsidies are paid for by consumers and tax payers; they are not free.

All of which Spain (and Obama’s other model Germany) learned, but Obama refuses to, even if we can safely assume he was told this by his sudden abandonment of directing us to Spain’s or Germany’s experience as his model after their truths were exposed. By now deciding against telling us what model he is following, he believes he can keep from us how it turned out there, and will turn out here.

It is almost as if our president wants the comparisons to Jimmy Carter. Claiming that taxpayer-funded solar power is the way of the future is about as good a way to guarantee them as any. Even Jon Stewart is mocking Obama for recycling failed plans of the past. But this isn’t funny any longer.

Christopher Horner is a senior fellow at the Competitive Enterprise Institute, and author of the recently-published The Liberal War on Transparency: Confessions of a Freedom of Information "Criminal".
Read more by Christopher Horner