You may have heard the mileage rating for the Nissan Leaf is 99 MPG (miles per gallon equivalent). Here’s what the sticker looks like (I highlighted the relevant portions that I will expand upon): 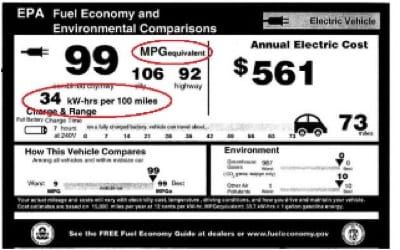 As Auto Blog says of the rating: “It looks good.” Of course it looks good. But there’s a whole lot more to the story. Note that the MPG rating is MPG equivalent. The MSM has been dropping the “equivalent,” making it seem to consumers that the vehicle is far more efficient than it truly is. Which is the intent, of course.

The ratings for the Chevy Volt have just been released as well. From the Detroit Free Press:

There is not a single instance of the word “equivalent” in the entire article. Nor is there any mention of last year’s claim that the Volt gets 230 miles per gallon (that was a different fraudulent number, based on a separate fraudulent scheme).

The current “miles per gallon equivalent” is a fraud perpetrated to hide the true environmental cost of these cars. One gallon of gas does have about 33.5 kilowatt-hours of chemical potential (depending on blend, additives, etc). And about that much energy is needed to get the Leaf to go 99 miles, and the Volt to go 93. But here’s where the fraud is perpetrated: the electricity for those vehicles is being generated by mostly coal power plants that are only about 33% efficient (minus transmission losses and losses from charging). Coal plants are off-site power generators (whereas car engines are on-board) and are totally ignored in the EPA rating.

Let me illustrate by example how this scheme works, and why it’s such a fraud.

Let’s say you took your gas-guzzling engine out of your car and hooked it up to a generator in your garage. The engine has a fuel efficiency of 15 MPG. That’s roughly 25% efficient (a 300 HP engine burns about 1000 HP of gas). You run the engine to generate electricity (let’s assume, just for kicks, that the generator hooked up to your car engine is 100% efficient) to charge your Nissan Leaf or Chevy Volt. Guess what the mileage of that Leaf is? The EPA says you will still get 99 MPG overall. But you actually used four gallons, not one, to get that far, thanks to the charging engine’s 25% efficiency.

The EPA is purposely comparing apples to oranges, conveniently hiding the fact that you are simply displacing gasoline usage with coal. The fact that you don’t have to directly throw coal into your car doesn’t mean you aren’t using any. Indeed, the overall efficiency of electric vehicles charged on coal is no better than a car with a spark ignition engine.

And far short of the efficiencies achieved with diesel.

Just in case anyone out there is opining that we should therefore go with “renewable sources” (wind, solar etc.), that will make the available energy problem even worse.

Nature will always get its pound of flesh, and the EPA’s intentional misleading of consumers doesn’t change the fact that we will be no less dependent on fossil fuel at all — and may be more so in this case. As it is, without far more nuclear power plants, the combination of using coal with lithium — the mining of which is one of the dirtiest operations known to man — may well be environmentally worse than just burning gasoline, and is definitely worse than burning diesel.

The Obama administration should hand out a blue pill with each purchase of the Chevy Volt, so you can smugly drive around in ignorant bliss.

Chris Kobus is an Associate Professor in the Department of Mechanical Engineering at Oakland University where he has worked since receiving his Ph.D. in 1998. He is the Director of the Clean Energy Research Center (CERC), and his research focus is in the broad field of energy transport and conversion.
Read more by Chris J Kobus