So, How Much Sanity Was There in D.C. Yesterday? (Updated)

What if they held a political rally and a rock concert broke out?

The “Rally to Restore Sanity/Fear” in Washington, D.C., on Saturday looked like it was probably generally a lot of fun.  The crowd looked cheerful, and I generally like Jon Stewart and sometimes like Stephen Colbert.  The music was okay — I’m a big fan of Cat Stevens, and the guy with the beard (Yusuf something?) who sang “Peace Train” did a pretty credible cover version.

But Roger didn’t ask for a review; he wanted the now-traditional Pajamas Media crowd size estimate.

As always, this would be much easier if I could get a photo of the crowd from directly overhead, and as usual, I can’t find one.  Apparently, for some reason, they no longer let aircraft fly over the Capitol and White House, so we have to settle for the usual photos from locations from the Washington Monument or the like.

The AP provides us several in a slideshow.  Here’s a good one: 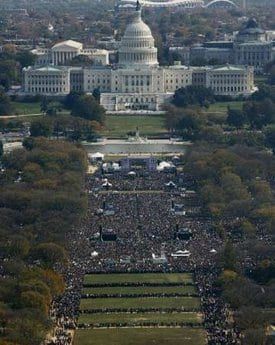 Of course, right away we notice something: large parts of the National Mall are blocked off to the crowds.  If we’re going to make an estimate, we need to know how much.  AP provides us with another shot with a little bit wider angle: 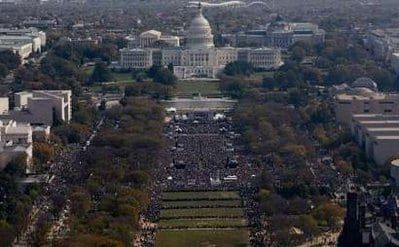 …and one more from behind the stage and toward the Washington Monument, so we can see that the crowd really does stop somewhere in the middle of the Mall.  In these pictures, north is to the left, so we have the crowd coming a little west of the main entrance to the National Gallery of Art on the north: 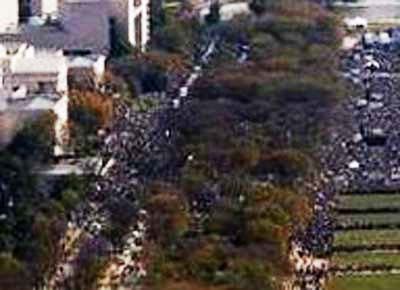 On the other side of the Mall, the crowd seems to be roughly up to the end of the National Air and Space Museum: 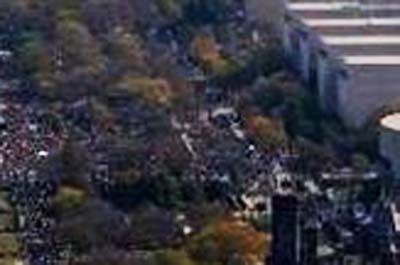 … while on the east end, it appears the stage is set up somewhere a little west of 4th St NW. 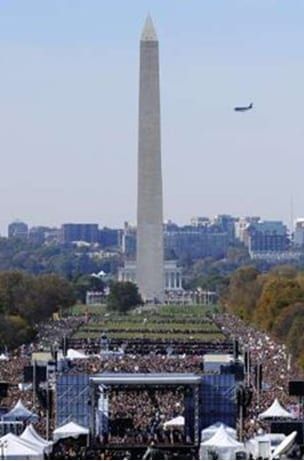 So I constructed a generous rectangle as the perimeter of the crowd that includes a good bit of the buildings on the sides, but then doesn’t attempt to add in the lines of people along the dirt lanes across the Mall.

Here’s the polygon I constructed: 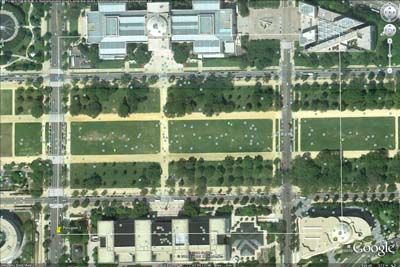 And once again using this excellent tool, I computed the are of the whole polygon as about 150,000 square meters.  Before I screw myself up with unit changes, we’ll convert that and call it 1,620,000 square feet.

Which means we can, at last, estimate the size of the damned crowd. We’ll use exactly the same figures for crowd density we used for the One Nation rally and the Beck “Restore Honor” rally:

The row labeled “based on CBS News estimate,” by the way, is using the CBS figure of 87,000 for the Beck 8/28 rally to derive a number for square feet per person, and applying that to the Stewart/Colbert rally.

It’s worth looking back at our table from the 8/28 rally for comparison.

Back when I was an undergraduate at the University of Colorado, the common rumor was that Colorado had been left out of Playboy magazine’s rankings of the top party schools because “it was unfair for professionals to be included in competition with amateurs.”  (It wasn’t true, and I presume lots of other schools had the same rumor; spare me from everyone’s story of how it was really their school.)

But in much the same way, it seems a bit unfair to compare either the 9/12 rally or Beck’s 8/28 rally with this one.  The 9/12 2009 rally was more or less ad hoc; Beck’s rally was more organized, but still basically a rally.

But look at the Comedy Central “Sanity/Fear” rally.  As PJTV’s Richard Pollock found out, it was very carefully organized, with limited press access — or at least attempts to limit press access — and with the announcement that video and photography was prohibited except for Comedy Central.

(On the National Mall?  Good luck with that, bunky.)

There was a big proscenium stage, with a lovely setup framing the Capitol — as a sometimes theater guy, I really admired it, it was gorgeous — and a large controlled area  behind the stage for performers and technical people. Professional sound set ups, with big name acts flying in for a few numbers.

Big name acts, extensive crowd control, rules against video or audio taping even with your cell phone, boring political speeches … this wasn’t a rally, this was a U2 concert!

And that tells us the real story: they held a rock/comedy concert, with pro acts including two of the hottest TV comedians around, and professional production, with free admission and with Arianna Huffington paying for bus rides — and no matter what you think a “dense” crowd is, it was still only about six-tenths of Beck’s open-air church service.

But the bearded guy really wasn’t a bad imitation of Cat Stevens.  Not like the real thing, of course.  I wonder if he’s thought of going pro?

Before this went to press, CBS News made their own estimate: 215,000 versus their estimate of 87,000 for the Beck rally.

To which I say “Oh, nonsense.”

Their contractor, AirPhotosLive.com, it turns out, did at least publish an explanation of their methodology,.

AirPhotosLive.com is correct that trying to count oblique photos is unsatisfactory, which is why we don’t: we use the oblique photos to get geography bounds on the crowd against landmarks, and then make a range of estimates using the Park Service’s own standards for crowd density.

The Beck rally covered roughly 2.4 million square feet and by AirPhotosLive’s own photographs large parts of that area were packed as densely as any overhead picture of Stewart/Colbert.  The Stewart/Colbert rally had, at most, about 6/10th the space — 1.62 million square feet vs. 2.4 million.  For it to have had that many people, they would have had to be packed about 6.7 times more densely than the densest parts of the Beck crowd.

Not a chance. Not even if they were packed in olive oil.