The Climategate files were made public just a month ago, and the email messages that were revealed have already had real impact. The emails show us scientists being petty and political, even corrupt. Suppressing dissenting science and perhaps even violating the law to prevent data from being shared with the rest of the world. They show us people with failings, egos against egos. But the emails themselves aren’t enough to call the overall science of CO2-driven, human-caused climate change into question.

The Climategate emails, however, make up only five percent of the Climategate files. The other 95 percent, the programs and data and documents, are where the real story is hiding. That story has begun to come out, in several independent analyses of the data we have, using hints from the emails and from other files and raw data that is available from other sources.

A story is beginning to take shape. This story broke into the world media Wednesday. An article in RIA Novosti, the Russian state-owned news service, states:

On Tuesday, the Moscow-based Institute of Economic Analysis (IEA) issued a report claiming that the Hadley Center for Climate Change based at the headquarters of the British Meteorological Office inExeter (Devon, England) had probably tampered with Russian-climate data.

The article reports that the IEA had taken a new look at the data used in the Intergovernmental Panel for Climatic Change (IPCC) reports. These reports, which became the basis for warnings of dramatic human-caused global warming that led to calls for extensive regulation and to the current climate change conference in Copenhagen, are based on world temperature estimates using measurements from thousands of reporting sites throughout the world.

Novosti reported that the data used for temperature measurements in Russia appeared to have been carefully chosen from the warmest reporting sites. If an average were taken over all Russian reporting sites, then there was little or no warming to report.

Using only the sites chosen for the IPCC reports, Russia instead showed significant warming, with a “hot spot” over Eastern Siberia.

This story turned out to fit neatly with some of the CRU emails. As Steve McIntyre discusses at Climate Audit, one email from Phil Jones to Michael Mann says:

Recently rejected two papers (one for JGR and for GRL) from people saying CRU has it wrong over Siberia. Went to town in both reviews, hopefully successfully. If either appears I will be very surprised, but you never know with GRL.

So here’s a puzzle. What papers is Jones referring to, and how did they claim CRU had it “wrong over Siberia”?

While the Novosti report has gotten the most attention, it’s not the only such report. The Climategate files forced the UK Meteorological Office to make at least part of their raw data available. One of the first was Willis Eschenbach, at Watts Up With That. Read the whole discussion and also Eschenbach’s answer to a critique published in the Economist for the details, but here is the “money shot”: 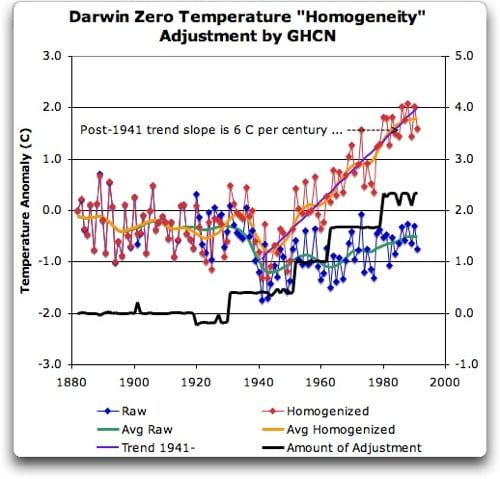 The next domino was a study by Dr. Richard Keen of the University of Colorado that was reported at the Air Vent blog. In it, Dr. Keen compares the raw data from the National Climate Data Center (NCDC) with data from the Global Climate historical network, the adjusted data as published in the IPCC report. Dr. Keen finds that the raw data does indeed show an upward trend of 0.69°C per century, which he believes is explained by the “Pacific Decadal Oscillator,” a well known long-term phenomenon.

The data used by the IPCC instead shows warming four times greater, 2.8°C per century, an adjustment of about 2°C.

Other such comparisons followed: Data from around Nashville; data collected in Antarctica, which, after adjustment, comes out to be from a single site near the ocean; data from the Baltic and Scandinavian countries; even in Central Park.

In all of these cases, there are mysterious, unexplained warming adjustments for the last part of the century.

It ought to be said that these adjustments don’t necessarily prove the data has been purposefully fudged. Handling this kind of large data set requires using statistical techniques to try and make the data consistent. (Dr. William M. Briggs, a Pajamas Media contributor, has a nice series starting here for people who want to read the technical details.) On the other hand, at some point we have to remember Goldfinger’s Law: Once is accident, twice coincidence, three times is enemy action. And the problem is, without the raw data, and without a clear explanation of the process by which the data has been adjusted — something that seems unlikely in light of the HARRY_READ_ME.txt file — there is no way to tell what the adjustments are based on. The CRU clique asks us to trust them, when the history in the Climategate emails doesn’t say much to encourage trust.

What can be said is this: We now have substantial evidence, from several independent sources, that the data used as the basis for the IPCC report has been adjusted in undocumented ways, and those adjustments account for nearly all the warming we are told has been caused by humans.

Until the data is re-examined, fully, openly, and transparently, it is impossible to conclude how much of a contribution to global climate change humans have made, or whether that contribution has been made by human-generated CO2. And without knowing that, attempts to “fix the problem,” through cap and trade or Copenhagen agreements, is misguided at best — and dangerous at worst.