Is There a Right to See Your Grandchildren?

I know a shattered family.

For various reasons, there are multiple parties fighting and each has their lawyers in tow. At the center of the conflict are those who have the least amount of say in the situation: the kids. The children’s parents have decided their grandparents will not be in their lives. Their claim is that the grandparents are angry, unstable, negative influences. The grandparents also bad-mouth the parents to the children. The grandparents, meanwhile, claim that they have a right to see those children, and that the parents cannot deny them visitation. Who is right?

There are scores of organizations dedicated to fighting for grandparents’ rights, each claiming that it is detrimental to children to be robbed of their grandparents.

And many times, these people want the state to intervene and mandate that grandparents should have visitation rights.

There is one case that most often comes up when discussing grandparents’ rights: Troxel vs. Granville. Tommie Granville and Brad Troxel were the unmarried parents of two girls. The relationship ended and Troxel would often take his daughters to see their grandparents at their home. He eventually committed suicide, and Tommie got remarried. After her marriage, her new husband legally adopted the two girls, and she tried to limit visits from the Troxels. The Troxels responded by filing suit based on the Washington state statute, which didn’t specifically address grandparents, but allowed third parties to file for visitation. The state Supreme Court ruled that the statute was too broad; the U.S. Supreme Court affirmed that decision. The Court found that the state should not inject itself into family affairs, that fit parents should be trusted that they are acting in the best interests of their children, and that is not the place of government to question parents’ decisions.

In an interview with PJ Media, Stephen T. Priestap, an attorney specializing in divorce and family law, explained the Troxel decision and how it impacted state statutes:

This is a state law issue and will always be a state law issue, despite the Supreme Court’s ruling in the Troxel case; that’s because virtually every state has its own “grandparents’ rights” statute. To broadly generalize, there are basically two types of grandparents’ rights statutes — restrictive and permissive. The law from Washington that was struck down was a permissive statute, and the problem with it basically was that it created a legal presumption that grandparent visitation was in the best interests of children, thus putting a burden on parents to show that it wasn’t. The Court felt the presumption should be in the parents’ favor, and that the grandparents should have to show that it’s in the children’s best interest. The ruling had little effect on more restrictive statutes, which generally say that grandparents can get visitation only in the event of the parents’ divorce or death of one parent. These types of laws are still viable and are still widely enforced in many states. As to the more permissive statutes, they have generally still been upheld as long as the burden is put on the grandparents to show that it’s in the child’s best interests to maintain contact, and since often this burden can be met fairly easily, grandparents’ rights are still alive and well in these states, but generally the actual visitation is limited to one or two nights in a month and perhaps some holiday contact. Any more extensive visitation beyond that may well risk a challenge based on the Troxel ruling. So, to summarize: restrictive state, probably no visitation unless there’s a death or divorce; permissive state, you can probably get some visitation but it will be pretty limited.

So it seems that courts aren’t out to completely cut off grandparents, but that they will, in most cases, rule against them.

That isn’t acceptable to some. There are those who fight for the so-called right of grandparents to have access to their grandchildren. The Grandparents Rights Organization, for example, believes that the bond between grandparent and grandchild should never be broken, and strives to confront what it sees as an attack.

But should grandparents really have a right to do any of this?

It is indisputable that in most cases grandparents are invaluable in a child’s life. They offer unconditional love, comfort, and affection. They bring wisdom and experience and help parents instill values and traditions important to the family. But if parents decides that, for whatever reason, they do not want the grandparents in their child’s life, then that should be their decision to make. It might be unfair, it may not be moral, it’s perhaps not what you would do in the same situation, but parents have the right to raise their son or daughter as they see fit — especially when it comes to choosing who has the privilege of being part of their child’s life. 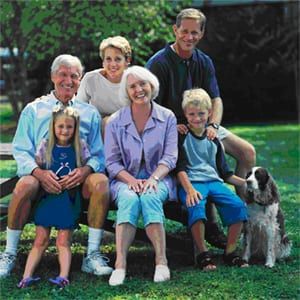 And while much has been made about the importance of grandparents, the negative aspects are rarely discussed. The main reasons grandparents’ rights usually seem to be an issue are in cases of divorce or death. But does the continued presence of grandparents offer comfort to the child or just add greater stress? A British review of family justice found that, in divorce cases, grandparents actually cause more stress and conflict for the children. When grandparents insist on seeing their grandchildren, against the wishes of the children’s parents, are they thinking about what is best for the children, or are they being selfish?

Either way, it shouldn’t matter what the shoulda-woulda-couldas are. The government has no right to be making decisions such as these, plain and simple. As long as the parents are not abusive drug addicts then there is no reason that they can’t make these kinds of decisions for themselves. And grandparents attempting to circumvent parental authority through the court system are making a blatant attack on parental rights. Personally, I wonder how these grandparents would have reacted if their parents had done something similar to them.

The fact of the matter is that when it comes to children, parents come first. They have first say, not grandparents. And while it might not be fair or right or ethical, it’s a decision that grandparents should be willing to accept, rather than undermining the authority of the children’s actual parents.

Cassy Fiano is a blogger who has written for sites such as Right Wing News, Wizbang, Hot Air, and more. Aside from PJ Lifestyle, her work can also be found at Live Action News and You Served. Cassy is married to a United States Marine. They have two children, both boys, one of whom has Down syndrome.
Read more by Cassy Fiano