During the weeks since November 21 I have been living in a parallel universe. It is a universe in which many readers may have dwelt: the world of life support in intensive care.

In mid-November my close friend Mil rang to tell me she was feeling odd. She was house-sitting for a friend and said she had ordered freshly baked soda bread in a new patisserie in St. John’s Wood but had begun to feel ill shortly after eating a portion of the loaf. I began to think that the bread had been destined for a Russian oligarch or Litvinenko-esque exile, as her symptoms were becoming severe. On day two she told me she was riven with fever and chills; I told her it was flu but she said she would see a homeopath. I growled. (A homeopath once almost killed me.)

On day three she left a message on my Ansafone unlike any she had ever left in all the years I had known her: “Carol, call me back. This is important.” I had a strep throat and was on antibiotics and could not go to her. It was late on a Wednesday evening but I rang her and she was incoherent. She said I needed to top up her cell phone and recited a series of numbers. I told her she was not making any sense and she hung up. Something was terribly wrong. I called Mil again and again over the next few days with no reply, but on Saturday a young man in the house in which she was staying answered her phone: She was in the hospital. “The doctors say it is 50-50. She is on life support at St. Mary’s.”

I stopped everything and went to the hospital. I was allowed into the intensive care unit by a young and charming doctor when I explained I was a close friend. What greeted me can only be described as a scene from a horror film. Mil was attached to every machine in creation and had obviously been bleeding from every orifice. She was the color of death. Her kidneys had shut down and as she had suffered complete renal failure was on dialysis. Like most people who live out their lives never having experienced catastrophic medical events, I had never seen a dialysis machine and remember uttering a sort of “auwgh!” sound. She required close to 100% oxygen, was on a ventilator, and was attached to an array of innumerable tubes and needles. Even the sight of my mother in intensive care before her death had not prepared me for this.

All the while the vast unit hummed away, the good-natured nurses and youthful doctors taking turns attending patient after patient in various stages of near demise. Mil was in critical, near grave, condition and I was told, “This is as bad as it gets,” by one weary nurse. The physiotherapist said that if Mil survived it would be “six months to a year” before she could be a normal, functioning individual. It was thought she had Legionnaire’s Disease with total organ shutdown. The theory was that she had collapsed in the house and had lain without water or food for two days, after coughing and hemorrhaging. One American friend was upset that Mil had not been completely cleaned up but it was apparent that the pressure to get her onto the machines to swiftly rescue her from certain death had had to take priority.

What had gone wrong? Like many basically fit people Mil had ignored the warning signs of grave illness. This was odd because she and I had been vigilant — yes, neurotic — about the slightest signs of illness after barely surviving the Millennium Flu of December 1999 that had killed thousands here and around the world.

In the ensuing days Mil’s condition remained grave and, though she had been stabilized by the intensive care unit, her family, friends, and I had begun to talk about funeral arrangements, transporting her body to her chosen final resting place and a London memorial service. In the waiting room I developed a fellowship with the other people spending hours at the hospital waiting to see if death was imminent or if tomorrow might bring renewed life. I forgot everything: work commitments, Christmas cards, and organizing New Year’s Eve. Mil would not likely see 2009 and my nights were spent enduring unimaginably terrifying nightmares in a kind of twilight sleep.

Over the first weekend I remembered that Mil was allergic to penicillin. She was on antibiotic drips and I called her general practitioner and left a message. Early on Monday morning the physician rang and said she would contact the hospital immediately to alert them to Mil’s allergies. As it transpired she was already breaking out into a rash and the doctors were investigating. Thankfully she was taken off penicillin; the rare strain of pneumonia she had contracted required a specific drug and this adjustment with the intervention of her GP very likely saved her life. None of this involved money or insurance forms. Funded by the taxpayer since 1948, this was the NHS at its magnificent best. Some may say I am being simplistic and that there are ubiquitous scenarios of waiting lists and botched procedures, but I have lived under the NHS for thirty-three years and consider it one of the great wonders of the world.

Over the weeks an array of some sixty specialists, ward doctors, nurses, and physiotherapists tended the unit. When Mil began to process oxygen we thought she might survive. Two weeks into her crisis she was still on a vast array of drugs and was connected to the dialysis machine without a break. She had to have a tracheotomy the day after her birthday — the sweet nurses reminded the visitors of this — and she was being monitored every minute for a multitude of issues. She had come through septic shock but the road to recovery was still an arduous one. Imagine how much this would have cost in the USA.

St. Mary’s is a huge teaching hospital most famous for the corner office of the old building where Alexander Fleming discovered penicillin. You can visit the museum and climb the dingy stairs he used to ascend to his tiny study where the miracle unfolded almost a century ago. 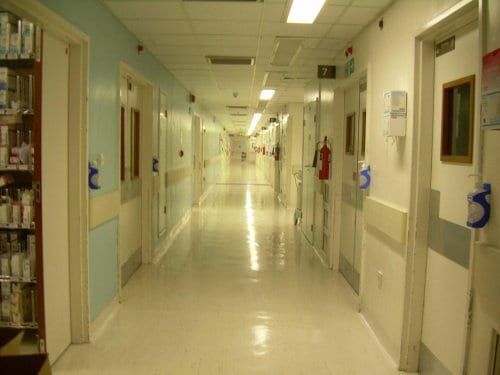 One hundred years later this is a stunning medical center. Mil is now eating and talking. Despite suffering from the crippling post-coma condition known as peripheral neuropathy, she is improving. Her bespoke team of highly skilled doctors and nurses is determined to get her on her feet again. Soon she will be placed in an NHS rehabilitation home that offers one’s own little “bedsit” flat alongside nursing, regular physiotherapy, and three meals and afternoon tea each day. I have borne witness to the 1948 NHS promise of care “from the cradle to the grave,” but Mil is now far from her grave.

In 2004 I was taken to task by Jim Brenner of the Kerry campaign when I had traveled to the United States at the behest of the candidate’s sister Diana; like me she had lived abroad and wanted Americans to see the benefits of the NHS. Despite being a diehard neo-con I extolled “socialized medicine” to Jim and this enraged him. Hmmmm. Franklin Roosevelt, a consummate politician, harnessed the support of Republican John Gilbert Winant on social programs; no doubt if FDR had lived to see the NHS established under the Attlee regime he would have galvanized Congress to adopt a similar plan in post-war America.

For seven weeks I have watched a miracle unfold as dozens of modestly paid but utterly devoted medical practitioners have labored to bring my old British friend back from the brink. Not one penny has changed hands. In an environment teeming with the highest levels of professionalism I have watched every aspect of life support administered with meticulous care by a team at which one can only marvel. In the United States Mil’s mountain of drugs, equipment support, tubes, disposables, gallons of intravenous feeds and Jevity liquid food, plus plain old man and woman hours would have cost close to $1 million by now.

This is universal health care. Americans deserve this. Every American. Now.