Pelosi Barricades Self in Office, Refuses to Hand Over the Gavel

WASHINGTON – Events took a strange turn Thursday when Rep. Nancy Pelosi, the soon-to-be former speaker of the U.S. House of Representatives, barricaded herself and small number of her staff in her office in the Cannon House Office Building in Washington, D.C.  It remains unclear whether the staff members inside the office with her are active participants in the action, or whether they are being held by Pelosi against their will.  Crying and shouts of “Never!” and “My blog will always be called ‘The Gavel!'” could be heard coming through the wall in the hallway outside the blocked door.

Capitol police say that Pelosi began blocking the door to her office shortly after dawn Thursday morning.  It’s unclear exactly what sparked Pelosi’s move, but Illinois Rep. Mike Quigley was reportedly seen leaving her office a few minutes before the sound of furniture moving and hammers were heard to echo from inside her office.  Quigley is among a growing number of Democrats seeking a new direction, or just some sign of a grasp of reality, in his party leadership after its defeats last week.  He had reportedly met with Pelosi to urge her to step aside, or at least stop referring to herself with the pronoun “we.”

“That time of morning it’s usually quiet in the building,” said Capitol police spokesman Sgt. Dan Hillen. “But we started getting reports of what sounded like someone remodeling their office so we went to check it out.  We found that Speaker Pelosi’s office doors were locked from the inside.  Our officers knocked, but no one answered or opened the door.  We did hear someone inside, who we now believe to be Pelosi, whisper, ‘Cheese it, it’s the cops!’ before uttering a long, loud shush.  There were also sounds of muffled crying.  We retrieved the keys to unlock the door, but met resistance from inside.  Those inside have apparently moved quite a bit of furniture and at least one sculpture into the doorway, and something large and wooden has been nailed across the doors to keep them from opening.”  Hillen speculated that the object nailed across the door might be the giant gavel that Pelosi famously toted across Capitol Hill when she became speaker. 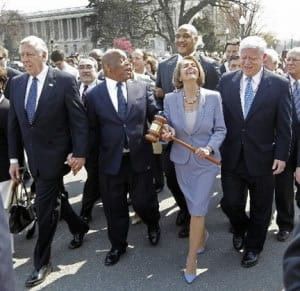 Hillen says that as far as he knows, there has never been a situation quite like this in the nation’s capital.

“Members and their staffs get upset all the time, like anybody else,” said Hillen. “Any time you have an election, some folks win, others lose, and life goes on.  There’s the occasional lovers’ quarrel, but those never turn involve barricades. Well, once, but we won’t go into that. This is a first as far as I know.  We’ve had folks try to cling to their offices during the usual shuffles, but no one has actually nailed objects across doorways or placed a large marble bust of Che up against the door to keep people out, as Pelosi evidently has.”  Hillen paused for a few seconds.  “I don’t even know how they moved that bust.  It weighs close to a ton.  They had to have that room specially inspected and then reinforced just to get permission to put it in there, but Pelosi insisted, and as speaker, she gets some deference and privilege. Or used to.”

According to the military, Pelosi was scheduled to fly a military aircraft up to Martha’s Vineyard this afternoon for a late lunch before returning via the same military aircraft to Washington in time to watch Countdown with Keith Olbermann.  That flight was canceled via phone call by someone on Pelosi’s staff this morning.  The airman who handled the call reports that he heard the strains of “We Shall Overcome” in the background.

“They had a guitar, a tambourine, and what sounded like a sitar accompanying them.  And a gong.  The usual, basically, from Pelosi’s office,” said Senior Airman Jake Strand. “There’s singing or chanting going on in the background pretty much every time they call for a flight, but they’re not exactly the Indigo Girls.”

Pelosi’s use of military aircraft has reportedly cost the U.S. taxpayer upwards of $15 million since she became speaker of the House.  With the Democrats’ defeats on Nov. 2, presumed Speaker John Boehner has said that he will continue to fly commercial.  As a mere representative, Pelosi’s access to the military hops will end.

“We should have seen the signs of trouble,” says Sgt. Hillen. “They were all there.  Pelosi even running for minority leader with a 29% approval rating should have tipped us off.  The insistence that nothing in the Democratic Party’s leadership should change.  Pelosi’s ‘welcoming of Republican ideas‘ only after they’ve taken more than 60 seats in the House, 6 seats in the Senate, 8 governorships, flipped several state legislatures, taken hundreds of seats from the Democrats at the state level and rendered the president at least temporarily irrelevant — and all in a redistricting year.  The fact that she called that Congress ‘productive’ when the main thing it produced was stagnant economy, a lot of debt, and a Republican takeover.  The signs of trouble were all there, we just missed them.  Like Pelosi herself and most liberal pundits, I think we were all in a bit of denial.”

Hillen had no prediction for when the standoff in Pelosi’s office would end.  “She won’t be speaker anymore in January, so one way or the other, this will be Mr. Boehner’s office.  For now, we’re taking a patient approach. They’re all vegans in there, but they have to eat sometime.”

(Yes, this is a parody.  Unfortunately, Pelosi’s four years as speaker actually occurred.)