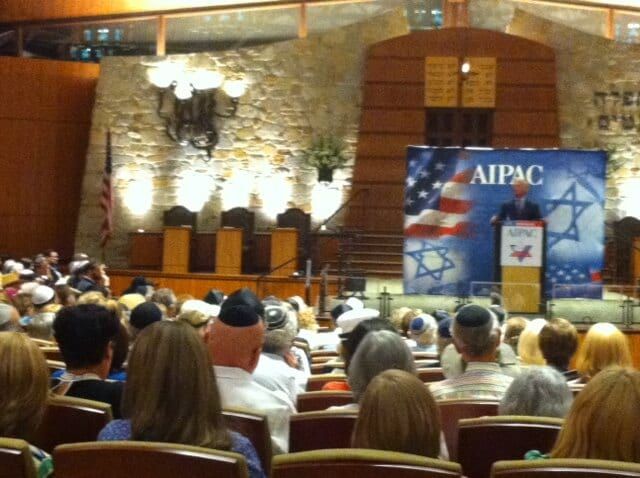 PIKESVILLE, Md. — With their senators’ decisions on the Iran nuclear deal still undeclared, Maryland residents packed their synagogue in a Baltimore suburb Tuesday night to voice their opposition to the P5+1 accord.

The American Israel Public Affairs Committee-sponsored rally at the Beth Tfiloh Congregation in Pikesville was thrown together at the last minute, with a decision to go ahead made Friday evening, outreach beginning on Sunday and fliers posted mid-day Monday.

Yet the event began nearly half an hour late because the parking lot was jammed and people young and old were still streaming in, some finding seats on the floor or standing with their “We want a better deal” signs.

Rabbi Mitchell Wohlberg told the crowd that he wondered “how it is possible that others were able not to come” given the gravity of the issue — and noted that some rabbis were making “all sorts of excuses” to not talk about the Iran deal with their congregations.

“We are here because we could not help but be here,” Wohlberg said, comparing inaction on the Iran deal to the Genesis story of Joseph’s brothers ignoring his cries for help at the bottom of a pit while they calmly sat down to eat a meal.

So is Israel’s “pit of despair,” he said. “They all have cried out to us for help, and we should go about business as usual?”

The rabbi said J Street sent him a request to bring “security experts” to the congregation for a presentation on the Iran deal. Just the mention of the pro-deal lobbying group raised grumbles among the crowd.

“Keep J Street off my street,” he added to cheers.

“Yes, it’s possible that the president will have enough votes to sustain his veto,” the rabbi said, stressing it sends a “powerful message if both houses of Congress joined by the American people vote down the deal.”

“We can still make that happen.”

Michael Pregent, a former senior adviser to retired Army Gen. David Petraeus and executive director of Veterans Against the Deal, said he’s traveling to Colorado on Wednesday to lobby undecided Sen. Michael Bennet (D). “If he refuses to meet with us, we’ll tell the world that he didn’t want to listen to veterans,” Pregent said. Then on Thursday, they’ll head to West Virginia to meet with Sen. Joe Manchin (D), another undecided. If he refuses to meet with them, they’ll send out the same message.

“I know that the White House is close to touting the number of supporters,” Pregent said. “We don’t believe that any vote is safe until the vote actually takes place. Believe me when I say nothing is final until the last vote is cast.”

Pregent said Veterans Against the Deal rose after President Obama accused deal opponents of warmongering. “We’re the last people who want to go to war,” he said. “…When we go to war, we fight to win them.”

AIPAC Executive Director Howard Kohr directed the crowd to take out their cell phones and add two numbers: (202) 224-3121, the switchboard for Senate offices, and (202)225-3121, the House switchboard. At 9 a.m. Wednesday, Kohr said, they needed to call Sens. Ben Cardin (D-Md.) and Barbara Mikulski (D-Md.), as well as the state’s House members.

“It’s our belief that if we can move the members of this delegation it will have an impact on other delegations,” Kohr said. “This is a moment for action. This is a moment to pick up the phone to let your voices be heard. Ensure that the Congress will be with us — one thing we know already, the American people are.”

“When the vote happens we know already that a bipartisan majority in the House and Senate are against this deal” — though “unfortunately” there’s the veto override threshold.

The AIPAC director stressed that “this regime in Tehran, at its heart, is anti-Semitic,” and “when a nation says it is going to destroy you that is the intent.”

“This deal is so deficient that almost any deal is better than this deal,” Kohr said.