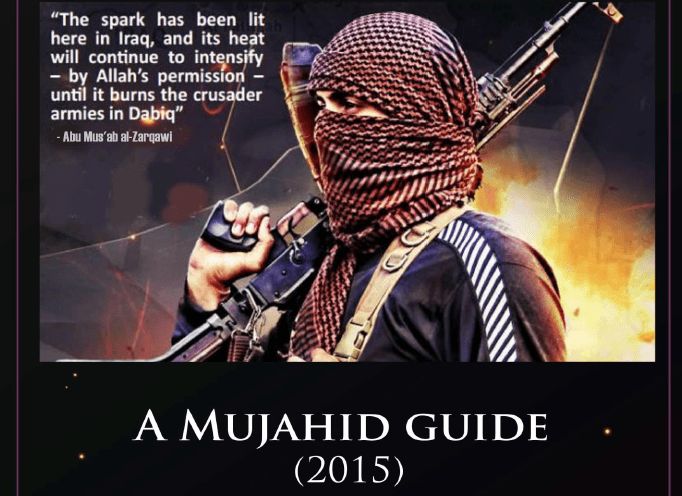 A guide for jihadists in the West issued by ISIS late last month urges followers to train with Nerf guns and watch Bourne films as part of their under-the-radar preparation for terrorist attacks.

“Many Muslims are putting alot of effort into showing the world that we are peaceful citizens, we’re spending thousands of Euros to do Da’wah (invitation to Islam) campaigns to show how good we are in society, but we’re miserably failing. The leaders of disbelief repeatedly lie in the media and say that we Muslims are all terrorists, while we denied it and wanted to be peaceful citizens,” the manual, How to Survive in the West, says. “But they have cornered us and forced us into becoming radicalised, and that will be the cause of their defeat and be the cause for the conquest of Rome.”

“…Those who go on the offensive earlier on will learn how to react in different situations, and will more likely receive martyrdom (shahadah) instead of long-term imprisonment.”

The author of the book is only identified in the foreword as a male who “has been studying the global Jihad for 10+ years.”

They’re told to alter their first name — “Al instead of Ali, or a neutral name like Adam” — or make up an alias, as jihadists in the Islamic State “are not allowed to tell their real name to anyone in case their friends are captured and
interrogated and reveal the real name of the brothers to the tyrants.” Plus, they argue, an alias with a non-Muslim name would come in handy if they want to get an “important position” such as work in a power plant.

Then comes the question of cold, hard cash: “Before any real Jihad can be fought, Muslims require money.” Conveniently, “in cases of necessity and for survival, Muslims are permitted to get money from ways which are not normally allowed.”

“If you are an expert in credit card fraud, paypal/ebay scams, Phishing, hacking, or you know the secrets of a big company, then take advantage of your skills,” the book advises, emphasizing the crimes in bold. “If you can claim extra benefits from a government, then do so. If you can avoid paying taxes, then do so.” Taking out a loan you’ll never repay and using the money to immigrate to the Islamic State is encouraged, but if you get caught doing this or other scams don’t say you were raising dough for jihad, the guide cautions.

Followers are instructed to keep their Internet and social media history “clean” by using a secure TOR browser and catching up on their jihad news via sources like Al-Jazeera. “Do not engross yourself with too much info or constant browsing. Otherwise you will always have it on your mind and talk about Jihadi events in front of your family and friends.”

Since “mujahideen run for a few hours, daily, on mountains before having their breakfast,” Western jihadis are advised to run in the park in “three quarter jogging trousers,” learn to jump off walls on Wikihow, and join a climbing club. “If you keep jumping off your back wall, your neighbor might think you’re doing something suspicious and report you to the police, so small things like this are better avoided to bring the least amount of attention to yourself as possible,” the manual states.

And to train on shooting? “You should buy Toy guns (Nerf guns), or Pellet guns or Paintball guns for target practice” — preferably through a kid who won’t raise suspicion. Then, become a gamer. “Playing games like Call of Duty gives you knowledge of techniques used in warfare on different terrains.”

They’re encouraged to move up to “primitive weapons” such as crossbows, hiding them “like treasure maps,” and go camping for survivalist experience, carrying condoms because they hold a liter of water.

The e-book covers how to make six types of bombs, with tips previously published in AQAP’s Inspire magazine: Molotov cocktail, nail bomb, microwave airbag bomb, gas canister bomb, remote controlled bomb, and car bomb. “Practice them with trial and error on a small scale first to make sure you are doing them right.”

Jihadis are cautioned to see if they’re being tailed by intelligence or law enforcement agencies. “You have seen plenty of spy movies in the past, it’s now time you implemented some things you’ve learnt from them. If you don’t know of any, then watch the Bourne Films (Bourne Identity, Bourne Supremacy, Bourne Ultimatum) for tips,” the book states. They’re warned not to get caught in a sting operation: “The answer is quite simple: if someone recruits you or any of the learning youth and commands them to do an attack – you should leave him and not do it.”

And ISIS jihadists in the West shouldn’t call themselves lone wolves, but an ISIS “special services secret agent.”

They’re encouraged to take advantage of symbolic dates for attacks, to target places like synagogues and gas pipelines, and embrace one- or two-man operations like in France.

If one needs to get the heck out of Dodge and can’t make it to Syria or Iraq, “he can escape to the Islamic State in Libya, or Khorasan (Waziristan in Pakistan), or in Nigeria (under Boko Haram territory).”

“Yes, it is difficult to reach them lands, but it is also difficult for the enemy to be confident enough to search for you there. If a Muslim is in them lands and is caught by non Muslims, he can say he is a freelance journalist, but if he is caught by Muslims – he can prove to them he is a Muslim searching to join the Mujahideen,” the book says.

“Secret Agents have to be masters of disguise. If they are a girl, they may do makeup in a style which makes them look totally different (i.e. to make their face look fatter or thinner). They may wear a different colored hair wig due to the necessity of the situation. They might put a prominent beauty spot or fake freckles on their face with a pen which makes them look totally different to who they really are. They will change their clothes style.” Guys can use bushy fake moustaches. “All this can be done in necessity until you can find refuge and safety and the media attention goes away from you. Once the person is safe in the Islamic State, they might ring the cell phone detonator and the car might explode. But they can’t catch you now.”

As a final word of advice, ISIS followers are urged to share the manual by renaming the file first — “something else safe (i.e. How to make cake).”