How ISIS Plans to Sack Rome

An ISIS e-book on how to accomplish their caliphate goal of sacking Rome stresses enlisting “the Islamic State’s secret weapon = secret white converts” to take on Italy.

Much of the book, “Black Flags from Rome,” is dedicated to laying out a case for why Muslims in Europe should rise up and assist ISIS from within, citing justifications for discontent from modern-day anti-immigration protests back to post-Ottoman creation of Muslim “ghettos.”

The Rome title is one of a series disseminated online that includes Khorasan, Syria, Arabia and Persia, with a forthcoming “Black Flags from Palestine” title promised.

It uses graphics from Pew Research Center’s Forum on Religion & Public Life to show Muslim distribution throughout Europe. “Starting in the early 90s, a new era would begin for Islam in Europe,” the book states. “A new quality 3rd generation of Muslims would be born who had given up the victim subservient slave mentality the previous generations had. This generation would be emboldened and more confident in their newly (re)discovered beliefs. They would see the world from a new perspective, and unlike the previous generations who only dedicated on earning money for supporting the family ‘back home’, this new generation would see the world through the eyes of a global Ummah (Muslim nation) which transcended all national boundaries.”

It offers the Irish Republican Army attacks of the ’80 and ’90s as an example of a “ruthless” guerrilla campaign in Europe, and the GIA (Group Islamique Army) in France as emblematic of the 1990s “Islamic jihad revival in Europe.” The GIA, notes the text, also trailblazed in Europe with its magazine propaganda and solicitation of donations to smuggle weapons to jihadists in Algeria.

“No doubt, if a war in Europe is to spark in the future, this whole process will be reversed and weapons will be smuggled in a similar way from the Islamic Maghrib into the heart of Europe.”

The book talks about efforts to spread Sharia law in Europe countered by “right-wing groups” and media outlets that “would spread news that Muslim males were making ‘grooming gangs’ which abuse ‘white girls’, which would make even more people join the right-wing groups.” It includes screenshots of tweets including one from Rupert Murdoch about Muslims needing to destroy “jihadist cancer” in their midst.

The Islamic State, it says, “re-awoke” in the midst of Syrian turmoil and “the exit of American troops from Iraq in 2010.”

“The Western powers would not get involved in physical ground combat because they had just withdrawn from a failed war in Iraq (their public wouldn’t be happy with it.) This opportunity gave the Islamic State to grow stronger, with more fighters and more territory and resources as the world watched on. Those who had left Europe to join the Islamic State would now be able to help other Europeans’ get into Syria… Here they could learn basic armed/shooting combat, assassination techniques, how to make explosives from homemade materials etc.”

The book doesn’t include a publish date, but it discusses the “shocking secret” revealed by the Kouachi brothers’ January attacks in France and subsequent busting up of a terror cell in Belgium: “There were small armies of the Islamic State within every country of Europe by late 2014, and the intelligence agencies didn’t even know about it!”

It states that European Muslims can ally with “a growing population of left-winged activists (people who are against; human/animal abuses, Zionism, and Austerity measures etc)” who “look up to the Muslims as a force who are strong enough to fight against the injustices of the world” in countering a growing divide between Muslims and “right-wing neo-Nazis.” It specifically cites people who are “sometimes” allied with Anonymous or anarchy groups — even though, angered by the assault on Charlie Hebdo, Anonymous is currently carrying out a hacking operation to take down ISIS accounts. 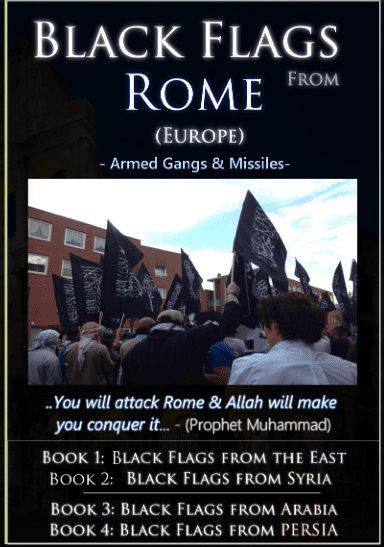 “If you have ever been at a pro-Palestine / anti-Israel protest, you will see many activists who are not even Muslims who are supportive of what Muslims are calling for (the fall of Zionism). It is most likely here that connections between Muslims and Left-wing activists will be made, and a portion from them will realise that protests are not effective, and that armed combat is the alternative,” the book states. “So they will start to work together in small cells of groups to fight and sabotage against the ‘financial elite’.”

The book predicts such “recruits” sympathetic to their cause “will give intelligence, share weapons and do undercover work for the Muslims to pave the way for the conquest of Rome.”

They’re also counting on ethnic minority soldiers defecting from European armies and passing their skills on to others as they raid weapons caches, while “lone wolves from within the community will rise” including “especially ex-gang members who also have access to weapons.”

The book gives tips on constructing a sturdy Molotov cocktail, using “turf wars” to begin seizing land at the neighborhood level, and consolidating land and armed groups “to finally have a big national armed force of Muslim fighters.”

“Muslim fighters from all European countries will continue the fight, breaking borders until they can reach Northern Rome.”

However, ISIS is also counting on another entity to break down European borders: “Europe’s main enemy” Russia.

“As Russia creeps more and more into Europe, it will project more power and weaken European nation states… militias will form because the government cannot protect all of its own territory.” Then, according to prophecy, states the book, Western Europe will “make a peace covenant with the Islamic State” as Russia “creeps closer” and remains a “threat” to Sunni Muslims as well as Europe.

“Russia has always been defeated when Muslims and Western Romans have allied together. Defeating Russia will allow Sunnis to defeat and take over Persia permanently, and that is when they will turn their eyes towards Rome.”

The book, though, predicts the mob bosses will put up tough resistance: “There is no doubt that if Muslims want to take over Italy, the Islamic State European fighters will have to ally with other militias to fight the Mafia before the conquest of Rome.” It recommends starting the fight in Bologna to choke off supply routes to the south.

It talks about seizing weapons stockpiles after defeating “puppet rulers in Muslim lands,” with an eye on Saudi and Iranian stockpiles, to disseminate to jihadis everywhere. “If AQIM in Tunisia fired missiles at Rome from its coast during the Roman [Armageddon] invasion of Syria, they could reach towards Italy (possibly even Rome) which is almost 160Km away from Tunisia.” Others, they argue, can invade Italy by boat. The country would then be “conquered by armed Muslims from all sides: 1 – European Armed Muslim Gangs from the North and West, 2 – Islamic Eastern European fighters from the Balkans (like Bosnia, Albania, Kosovo etc), and 3 – and Muslim Arab missiles and ships from the South.”

How will they craft their battle plans, including pinpointing targets and sharing missile strike coordinates? Google, the book says. “All the Islamic groups use Google Earth today to plan their attacks…. Usually only powerful countries had power to satellite technology, now everyone can use it for free.”

The strategy expects the defeat of a Russia-Iran alliance, the Roman attack on the Islamic State, and the conquest of Rome by 2020.

After adding that the antichrist is expected to show up seven months after the conquest of Rome, according to what Muhammad reportedly said, the ISIS book recommends an urban survival guide for further reading: the SAS Survival Handbook by John “Lofty” Wiseman. 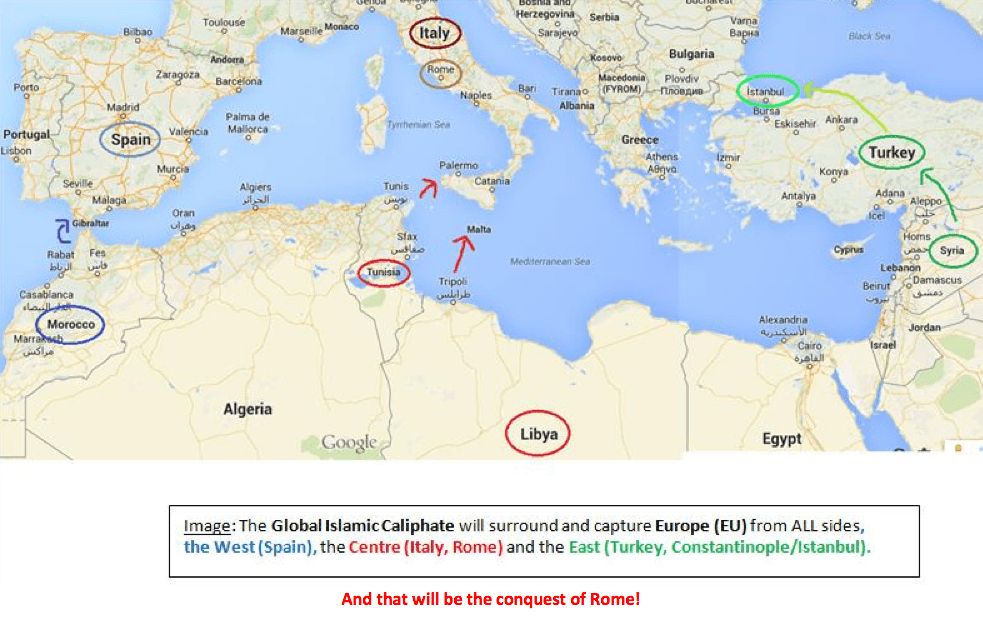 MORE: Inside an ISIS Handbook for Foreigners Running to the Islamic State