Both sides in the fight over ObamaCare converged upon Washington on the second day of arguments before the Supreme Court on Tuesday as lawmakers on Capitol Hill watched the proceedings closely to see what their party’s next move might be.

The AFL-CIO had announced on its website that protests would be held daily from 8 a.m. to noon outside the court on all three days of this week’s oral arguments.

But this second day happened to coincide with an anti-mandate rally that brought busloads of conservatives to the nation’s capital from as far away as Michigan and Florida.

The sidewalk demonstrations by the health-care law’s proponents weren’t limited to union members, but included contingents from Planned Parenthood, NOW, NARAL, Americans United for Change, and Our DC.

The demonstrators danced and sang along to Katrina and the Waves’ “Walking on Sunshine” and Kool & The Gang’s “Celebrate” while a coordinator in the center of their long oval walking path chided them to keep their signs high.

“So ‘ObamaCare’ is acceptable now?” a bystander mused aloud about their new embrace of the derogatory nickname.

One protester wore a paper exam gown reading “don’t leave me exposed” with a fake plastic butt on the back. Another was dressed as the Statue of Liberty carrying a big pack of birth-control pills. 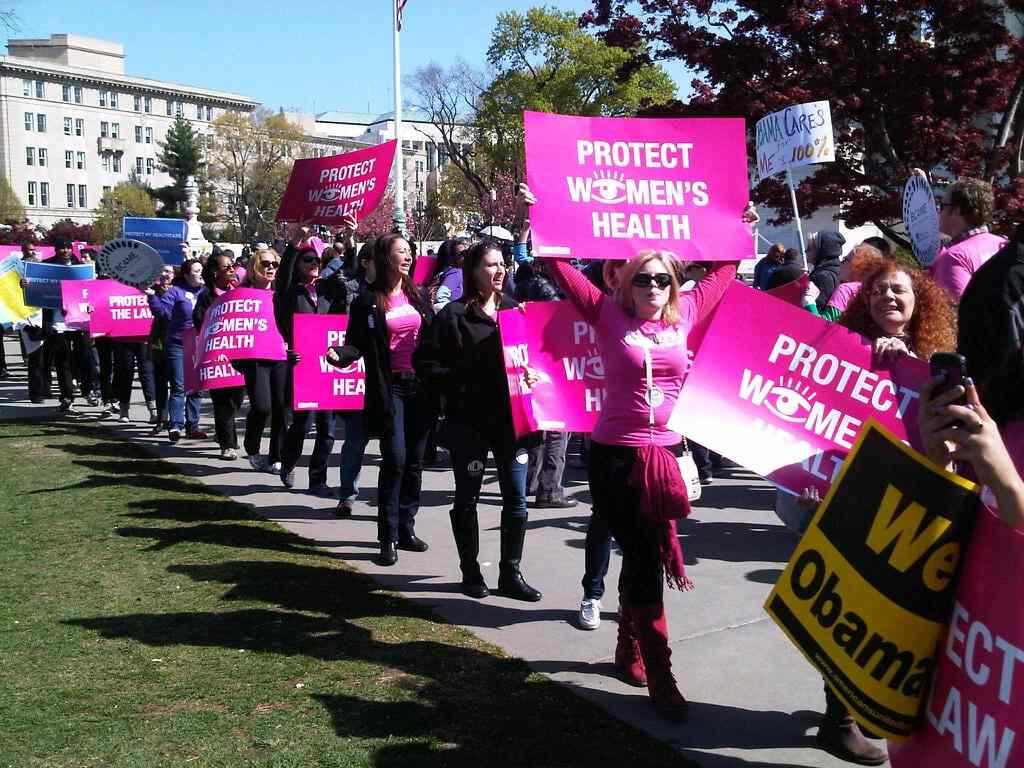 Pockets of Tea Party Patriots were seen near the steps of the Supreme Court and toward the curb and lone conservatives wandered in and out of the union march, picking debates, but the strength of the health-care mandate’s opponents grew as people who had arrived early for the Americans for Prosperity Hands Off My Health Care rally, which wasn’t until 1 p.m. a couple blocks away, trickled into the protest.

By the time the doors of the court opened shortly after noon, and one man gave a thumb’s-up sign while walking down the steps, the law’s opponents outnumbered the ObamaCare proponents.

They struck up “Walking on Sunshine” on the sound system again and resumed dancing.

“The people out here are a whole lot more rhythmic and have a lot more soul than the people in the court,” a man pep-talked at a microphone. 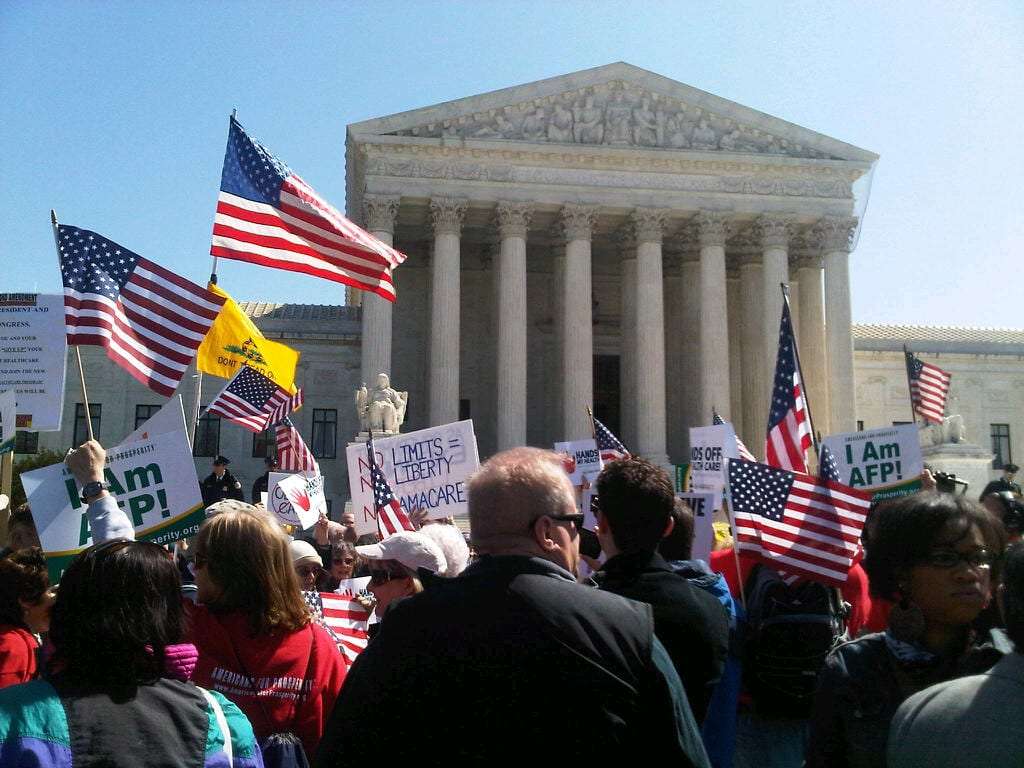 Over on the lawn outside the Senate, Democrats were giving a less musical defense of the health-care law as Majority Leader Harry Reid (D-Nev.) milled with a few others nearby while curious tourists streamed past.

“Opponents are basing their arguments on politics instead of precedence,” Health, Education, Labor, and Pensions Committee Chairman Tom Harkin (D-Iowa) lamented to reporters.

Harkin, who was joined by Sens. Pat Leahy (D-Vt.), Chuck Schumer (D-N.Y.) and Jack Reed (D-R.I.), predicted “this court can go no other way than to uphold the individual mandate.”

He also challenged Republicans to use ObamaCare in the 2012 campaign.

“Make our day,” Harkin said. “Continue to go out and campaign against this health-care bill.”

As soon as the Democrats left the podium, a pack of Senate Republicans swooped in, joined by several of the state attorneys general challenging the law and led by Minority Leader Mitch McConnell (R-Ky.), who decried “the single worst piece of legislation passed since I’ve been in Congress.”

Sen. Mike Johanns (R-Neb.) reflected the upbeat mood of the pack. “I would say the government had a tough day,” he said.

Florida Republican Marco Rubio linked the health-care law to job losses. “ObamaCare has been a disaster for America,” he said. “Thousands of businesses are afraid to grow or hire new people.”

Rubio repeated his full remarks in Spanish. When he left the press conference, a chunk of the press corps broke away to chase after the senator. 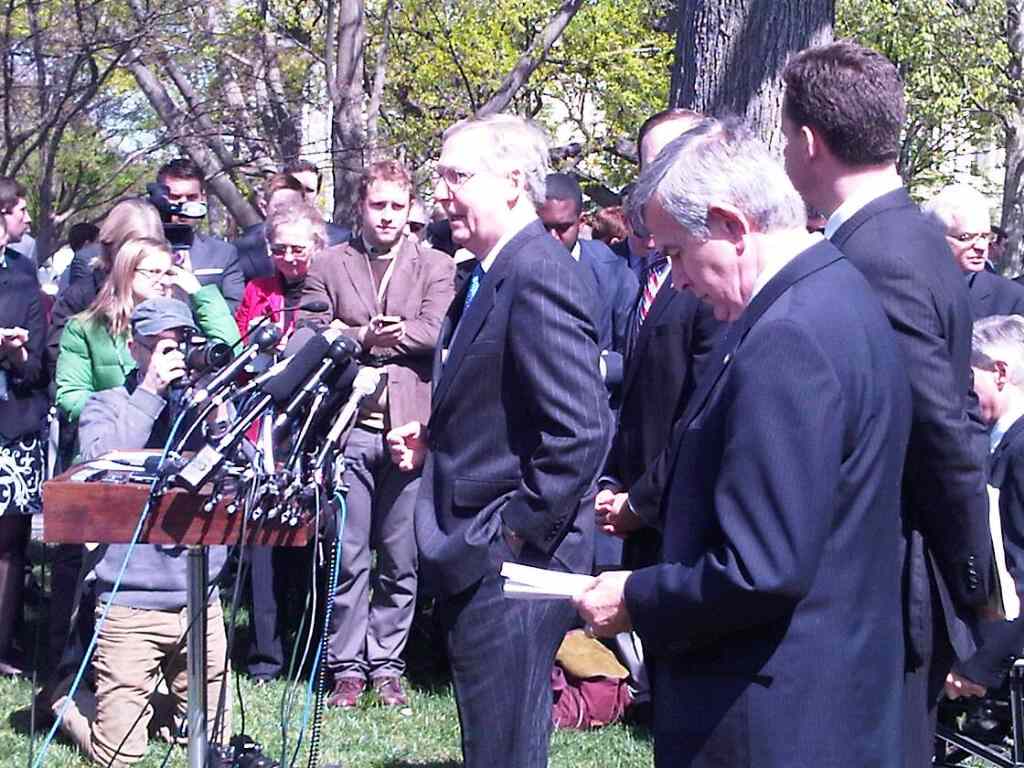 Soon afterward, more lawmakers paraded in front of a microphone to push for the death of the health-care law — but in front of the large, colorful Americans for Prosperity rally crowd in a park across the street from the Senate.

Big “Don’t Tread on Me” flags flew in all corners of the crowd, and various interest groups wove in and out of the audience handing out fliers — including a Rick Santorum for President postcard that checked off the similarities between ObamaCare and RomneyCare.

One sign noted that ObamaCare was “un-American, ungodly and from the pit of Hell.” Another simply read, “May God guide [Justice] Kennedy.”

House Budget Chairman Paul Ryan (R-Wis.), who told the crowd that his “Path to Prosperity” would come up for a vote on Thursday, stressed that his bill repeals ObamaCare.

But he left the cheering audience with a short pep talk for November. “We’re going to take back the White House to give us the justices we need,” he said.

“You dwarf the crowds from the left,” Sen. Ron Johnson (R-Wis.) told the rally. “You need to be our force multipliers.”

Two well-dressed young men from the left, one carrying a yellow-and-black “We [Heart] ObamaCare” sign, tried to loudly  debate rally attendees during the speakers.

Rep. Allen West (R-Fla.) slammed President Obama for flying out of the country — to South Korea for the Nuclear Security Summit — on ObamaCare’s two-year anniversary and not being back in the country for the second day of Supreme Court arguments.

“This health-care law is not in concert with the Constitution of the United States of America,” West said. “That’s why the Supreme Court needs to make the right decision.”

“No matter what the Supreme Court decides, we’re going to say to Barack Hussein Obama we are going to restore this constitutional republic,” he added. 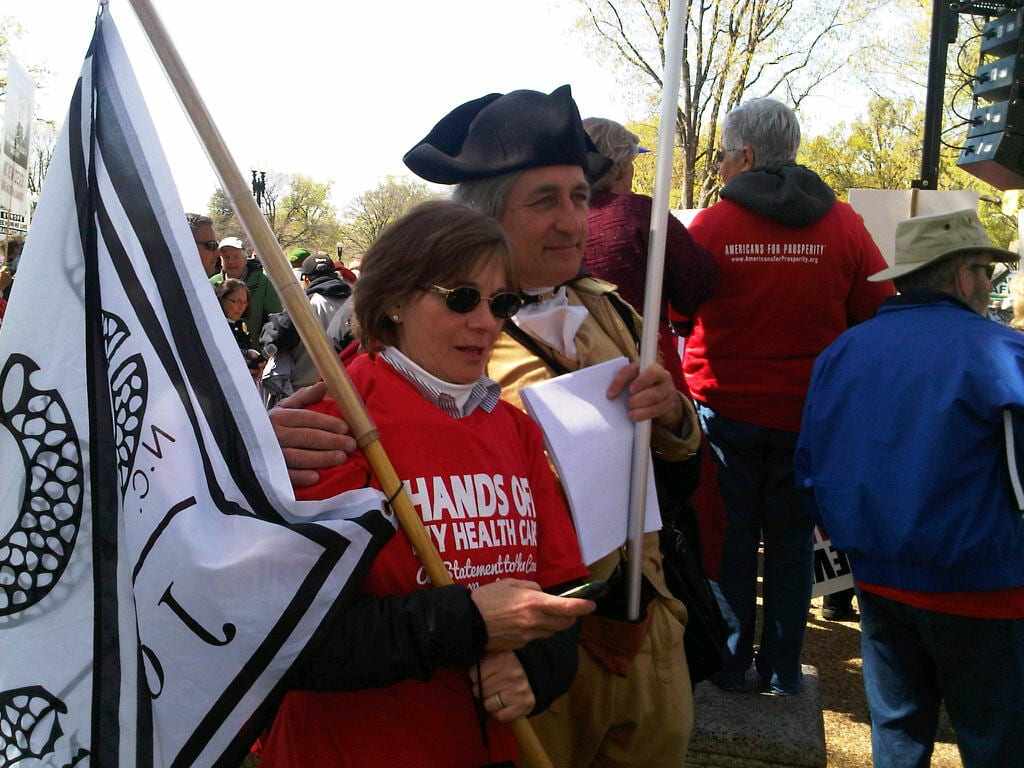