Round One of Anti-China Protests in San Francisco

As scores of San Francisco police officers corralled protesters into a narrow area in front of city hall Tuesday afternoon, a neo-hippie San Franciscan — five-day-old shadow, knit cap, backpack — chatted up one of the on-edge cops. “This has got to be better than the Iraq (war) protests, huh?” he said brightly.

“None of them bother me,” the burly officer responded brusquely.

“Yeah, but these people are peaceful,” said Neo-Hippie. “The Iraq protesters were all anti-American and violent.”

I had to pinch myself. I was standing next to the conversation, smack dab in the center of America’s Leftist Capital, and voices of reason were ringing out all around me. From the steps of city hall, organizers of the pro-Tibetan march chided Mayor Gavin Newsom for “going into hiding” and for his cockamamie idea of herding tomorrow’s torch protesters into “free-speech zones” far removed from the route. “They tried to keep us from speaking,” Committee of 100 for Tibet leader Giovanni Vassallo said via bullhorn to the crowd assembled at Newsom’s doorstep. “…I thought the entire city of San Francisco was a free-speech zone!” 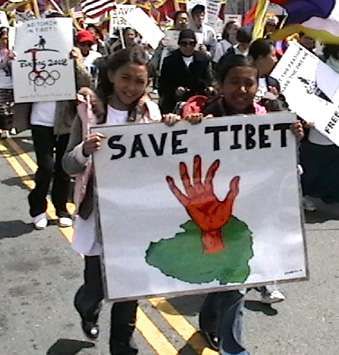 The march began at U.N. Plaza, a pedestrian thoroughfare that’s lived up to the uselessness of its namesake. (The Project for Public Places called the plaza’s central fountain “a sunken pit with water raging within (when it is on) that has become a bathing pool for San Francisco’s homeless.”) A stiff breeze pulled a sea of Tibetan and American flags taut; a portrait of the Dalai Lama graced the center of the stage, surrounded by a crush of news crews that eventually became clearly disappointed at the lack of uncivil disobedience.

Tenzing Chonden, the North American representative for the Tibetan government in exile, gave a status report from Tibet, and as expected it’s bleak: The exile government’s count of those killed by the Chinese since demonstrations in Tibet and surrounding Chinese provinces began is 156. (People’s Republic math: Divide by 8.) And those brave monks who led the protests? After being arrested and beaten, Chonden said, many have since committed suicide. “They could not tolerate the oppression anymore,” he said.

Meanwhile, China is massing more troops in the region, according to Chonden, and laying siege to monasteries that no longer have access to food or water. Thousands of ordinary Tibetans have been arrested, he said, and “many of them are now being tortured.” I was later given a sobering list of the names and ages of Tibetans confirmed killed since March 14: men and women, from within Tibet and neighboring Sichuan, ranging in age from 18 to 57. One speaker told of a husband and wife revealing their intentions to attend a protest to officers who asked, and the man being summarily shot in the head in front of his wife.

The local Tibetans’ pied piper, Supervisor Chris Daly, also strolled over after his resolution condemning China passed 8-3 last week at the Board of Supervisors. “We have the obligation… to greet this torch with alarm and protest… in a nonviolent yet militant way,” he told the crowd. (I saw one Tibetan later bow to Daly and kiss his hand.) Tenzin Dasang, President of the Regional of the Tibetan Youth Congress, also revved up the crowd for tomorrow’s protests, which have city officials especially nervous after three protesters climbed the Golden Gate Bridge and unfurled protest signs on Monday. “We will go out there and protest the Beijing genocide torch!” Dasang said to cheers.

A fresh statement from the Dalai Lama was also presented, in which the spiritual leader decried China for “trying to distort the truth at every occasion, such as saying that Tibetans look towards the Chinese Communist Party as the ‘Living Buddha,’ (which) is an ultra leftist statement and smacks of Han chauvinism.”

To cries of “get out China,” “Hu Jintao, shame on you,” and even “break down that wall,” the Tibetans and supporters marched to city hall, then on to the Chinese consulate. On the way from my hotel to the rally site, the cab driver went past the ghostly-quiet consulate, noting some scorch marks on the stucco that he said were from a firebomb tossed at the façade last week. But the only flame Tibetans carried Tuesday was the Tibetan Freedom Torch, which is passing through 50 cities from March 10 to August 8 — reaching Tibet on the day the Beijing Olympics begin, which should provoke an unseemly and badly timed response from China.

As protesters ranging from monks to Irishmen marched with the Tibetan torch — which, I might add, no one was chasing with a fire extinguisher — motorists going the opposite way on Van Ness Avenue stopped in lanes to take pictures, honked and flashed peace signs or, in the case of one Chinese woman I walked past, gave demonstrators the evil eye. Arriving at the consulate, it was now ringed with cops; officers were also perched on nearby rooftops.

And so went the first event in San Francisco’s Olympic offering: the Clash of the Liberals. Tomorrow will highlight the greatest ideological battle in this clash: Stand up for free speech and help oppressed people vs. bowing to a communist regime by trying to ensure they avoid embarrassment.

As one learns, San Franciscans can surprise you.

Bridget Johnson (www.bridgetjohnson.org) is a columnist at the Los Angeles Daily News.