You are forgiven for thinking that a major terrorist attack was thwarted in Sharpsburg, Maryland, this past Thursday. A Maryland State Police helicopter was in the air over 4433 Mills Road most of the day, as police, FBI SWAT teams, armored vehicles, and K-9 units converged upon the residence of Terry Allen Porter, 46.

Nor, it turned out, was Porter on any “Most Wanted” lists.

Terry Allen Porter’s home was raided using all the power of the state security apparatus not because he was terrorist, a bank robber, serial killer, or a relative of the Kennedy clan, but because of an anonymous tip that he was an avid outdoorsman:

Officers investigating a weapons complaint have removed guns from a home in Sharpsburg, ending a tense situation that stretched for hours Thursday afternoon.

Maryland State Police troopers were trying to serve a warrant against Terry Porter, a welder and avid hunter, after getting a tip that he had illegal weapons in his house on Mills Road, according to sources familiar with Porter and the investigation.

Even the “illegal weapons” reference in the story was misleading. Porter had run-of-the-mill shotguns, an old lever-action .30/30, and .22 LR rifles anyone might easily buy at Walmart or their neighborhood sporting goods store.

No, Terry Allen Porter required the attention of Maryland State Police, Washington County Sheriff’s Office deputies, a helicopter, K-9 units, a heavily armed FBI SWAT team, and two armored vehicles because he had guns and a twenty-year-old conviction for dealing cocaine that landing him in jail for six months in 1992.

An anonymous informant and a common sentiment of disgust with the results of the 2012 election were apparently enough to bring down the government’s militant wrath:

A person wishing to remain anonymous contacted state police in early November, telling them that Porter “has been getting crazier and crazier over the past several years,” the charging document said. The person told police that Porter had 10 to 15 “machine gun-style firearms,” six handguns and up to 10,000 rounds of ammunition, the document said.

The person told police that Porter was a doomsday prepper who had a bunker under his driveway, as well as surveillance cameras around his property, the charging document said.

Two searches of Porter’s property — one Thursday by warrant and a consent search Friday — turned up four shotguns, a .30-30-caliber rifle and two .22-caliber rifles, the charging document said.

A state police corporal went to Porter’s home Nov. 16, posing as a customer for the business Porter runs from his home, the charging document said. Porter got “very irritated” during a discussion of the recent presidential election and “openly admitted to being a prepper,” the document said.

Porter has now been charged for the few otherwise legal weapons found in his home.

How his home came to be raided should be of great concern to every American. All media accounts suggest that he was informed on by a fellow citizen who apparently had few facts correct (no “machine gun-style firearms,” handguns, or large caches of ammunition were recovered) and a police officer who felt not liking how the election turned out, having security cameras, and being a “prepper” constituted a threat that needed to be responded to with a combined-arms raid of infantry, armor, and air power. 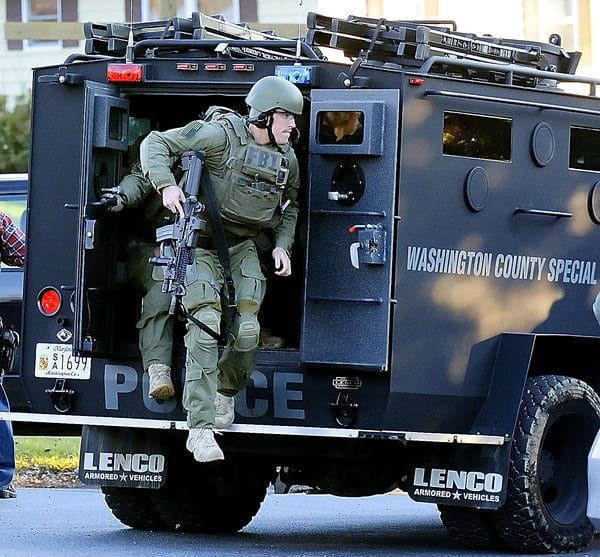 Porter’s crimes were so severe that he is already out on bail.

Whatever Porter’s criminal history of 20 years ago, only the crackpot informant who made the initial charge against Porter described him as a threat. Neighbors felt he was a good man with a mistake in his past who was unfairly targeted:

Heather Hamilton, 35, who lives at 18809 Burnside Bridge Road, around the corner from Porter’s house, said Friday that a Maryland State Police trooper went to her home Thursday to talk to her about what was going on and mentioned that it was regarding a man she had known since childhood.

“You had helicopters flying over, SWAT crews down here, excavation equipment was brought in, and armored vehicles,” she said. “It was ridiculous for (the man), who would not hurt another person for anything. Unless you would attack him, he’s not going to go after anyone.”

She said she viewed the operation as “a big waste of taxpayer money.”

Allen Crampton, 40, who lives on Mills Road, said he and Porter attended Sharpsburg Elementary School at the same time, although in different grades.

“He doesn’t deserve what happened to him yesterday,” Crampton said.

As an individual, I couldn’t care less about Terry Allen Porter.

As an American, I am appalled that an informant (who rather frankly appears to have been a liar) and scant evidence brought forth by an undercover cop who saw no actual criminal activity were enough to launch a massive paramilitary raid against a citizen without a history of violence.

It’s just the latest example of a police state run amok, where agencies use overwhelming force where it isn’t remotely needed to justify the $202 combat pants,  $240,000-$300,000 Bearcat G3 armored vehicles, real machine guns, helicopters, military-grade body armor, and other “toys” rarely needed by law enforcement, but pimped out by an over-reaching and ever-more invasive Department of Homeland Security and Inappropriate Touching (DHSIT).

Luckily, Porter wasn’t home at the time of the raid, or he likely would have ended up as dead as Jose Guerena Ortiz.

The government attempts to claim that the continued police arms race is in response to more heavily armed criminals, a claim put in doubt by the actual weapons linked to crimes.

There is no rational justification for a massive combined arms raid on a single man without a history of violence.

It would be Keystone Cops, except that in the old black-and-white Vaudeville performances, no one was in danger of being shot to death by overzealous and typically under-trained law enforcement officers with more firepower than capability to control it.

Related at PJM: SWAT and the Second Amendment