'Left' Behind: Tolerance and the Tea Party

As we noted in Thursday’s continuous coverage, the radical leftists of the “Crash the Tea Party” movement simply failed to materialize at the estimated 2,000 Tax Day tea party protests. While the stated plans of CrashtheTeaParty.Org involved infiltration, the counterprotesters were simply woefully inept.

The creator of the site, Jason Levin, has now “infiltrated” himself into adminstrative leave while educational authorities investigate whether he was updating the site on school time.

The bulk of those who did show appeared to be college-aged or twentysomething hipsters more worried about meeting rather low standards of stylish irony than in effectively torpedoing the legitimate protests of tea partiers. Many others opted to be open and honest about their opposition the tea party message, exercising their First Amendment rights with integrity. We get that.

But some were sincerely trying to pass as tea partiers. They sucked at it.

Left-wing plans to portray the tea party protesters as racists and bigots were a complete and utter failure, but that doesn’t mean there wasn’t significant racism on display — viewers of PJTV and readers of PJM captured examples of this horrific behavior in rallies across the nation.

Pete Denison was at the Denver tea party, where he captured this studly man holding up a sign proclaiming: “I Heart Teabagging.” I’m sure he does.

Though the next time he tries to infiltrate a tea party, he might fit in better if his sidekick wore something other than her ACLU t-shirt.

Most efforts at inciting hatred weren’t easily laughed off, however.

Jerry Stanton found this smug liberal standing behind the crowd at the New Haven, CT, Tea Party, with a foul two-sided sign.

After snapping these shots, Jerry told this fine specimen of liberal tolerance that his pictures would soon find their way on to the Internet (Jerry is an astute person). Mr. Tolerance’s response? According to Jerry, he ran to the nearest police officer and complained.

He’d probably get along quite well with our president’s old fundraiser host and alleged ghostwriter Bill Ayers. I don’t think either hikes, but both seem to have an affinity for camps.

In North Texas, Lance Pippenger caught a picture of tea party security intercepting a man in full Confederate regalia attempting to enter a tea party with the Stars and Bars.

I know that some of the tea party attendees are a little long in the tooth, but I don’t think any of them are that old. Note that neither the security guard nor the two men on the event staff beside him seemed at all thrilled with the disruption. They did remain civil as they turned this man away, and the flagpole is still presumably attached to the flag.

This wasn’t the only appearance of the old Confederate battle flag on display, however, as these two specimens showed up at Houston’s tea party.

Let me see if I get this right: a Confederate battle flag is supposed to be a sign of bigotry and racism according to the leftist orthodoxy (Stuff Stalin Said, 2nd. ed., pp. 34). But I’m fairly certain the young man on the left hasn’t gone to many Klan meetings, unless he’s gone with Dave Chappelle. Perhaps they were going for “edgy”?

In Cincinnati, we found a “moby” that looks like Moby, captured on camera by Michael Reeseman. Per Michael:

My wife Sarah and I had just gone down to the concession area when we heard the crowd warmly welcoming Sonja Schmidt to the podium. Rather than make the climb back to the nosebleed seats right away we stepped outside for some air and spotted this lonely fellow doing his rather obvious agent-provocateur bit.

Reading his sign, I quipped as we passed “Actually, there’s one inside speaking right now.”

“Sonja Schmidt — google her.” We continued to walk.

“You mean “Sonja Token”? he replied, a bit smarmily to my ears.

I’m not quite sure what it is about pasty white urban liberals that makes them think they have the right to judge the “authenticity” of someone’s race, but it must be tied to the same poorly oxygenated part of the brain that makes them blind to the fact assigning a skin color an ideology is racism of the first order itself. 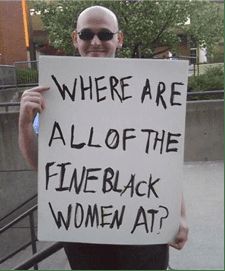 For the past few weeks Democrats were thrilled with the idea of going to tea parties around the nation and exposing racism.

I wonder how they feel about that now.