What do you see in the editorial cartoon below? 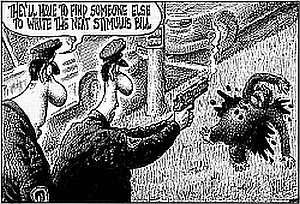 I see an editorial cartoon combining the too real absurdity of two current events:

The editorial cartoonist was clearly intoning that a deranged chimp couldn’t have authored a bill any worse than the boondoggle created by Nancy Pelosi in her little fiefdom we call the House of Representatives.

Like clockwork, however, the angry spoiled children of the media left race-baiting industry cried “Wolf!” “Racist!”

Here we go, yet again:

A cartoon likening the author of the stimulus bill, perhaps President Barack Obama, with a rabid chimpanzee graced the pages of the New York Post on Wednesday.The drawing, from famed cartoonist Sean Delonas, is rife with violent imagery and racial undertones. In it, two befuddled-looking police officers holding guns look over the dead and bleeding chimpanzee that attacked a woman in Stamford, Connecticut.

“They’ll have to find someone else to write the next stimulus bill,” reads the caption

Should we forgive the author of this rant, Sam Stein of the Huffington Post, for being too ignorant to know that a botoxed, pasty-faced white woman is behind the stimulus bill?

Of course Stein shouldn’t be forgiven. He, Al Sharpton, and other race-baiters on the left are once again attempting to fool their easily-led compatriots into a two-minute rage based upon what they know is a lie.

They do so because promoting a lie to put a critic on the defensive is all they can presently do to deflect attention from legitimate criticism of a horrific spending bill that even Democrats are starting to regret signing.

The only question is whether or not Democrats are going to be wise enough to note that the boys who cried “Racist!” are trying to lead them by the nose yet again. Can they once again be so easily prodded into off-base indignation? Or will there finally be a substantive disgust and backlash against those who would whip up racial strife to cover for their own rhetorical and philosophical impotence?