Giving Thanks — and Homes — to Wounded Vets

Simply Google “Joey Bozik” and read the pages that result without developing a lump in your throat and tears in your eyes. Go ahead. I dare you.

Sgt. Bozik, a soldier who served in Afghanistan and then Iraq, awoke in Walter Reed Army Medical Center on October 27, 2004, missing both legs and his right arm after an anti-tank mine ripped his Humvee apart. After grasping the extent of his injuries and the long recovery ahead of him, he wanted time to be alone with his fiancée, Jayme Peters. He told her he wasn’t the same man, that the road ahead would be long and hard, and that this isn’t what she thought she was getting when they got engaged. He gave her the option to go.

On October 27, 2008, under a crisp blue Carolina sky, I watched Joey Bozik step out of a long, black Hummer limousine on man-made legs. Standing beside him was Jayme, the woman who married him just a month after he said she could go. She is currently pregnant with their first child, a little girl due Christmas Eve. The Boziks were coming home, but what brought them to this home is a story of giving thanks that is heartwarming in and of itself. 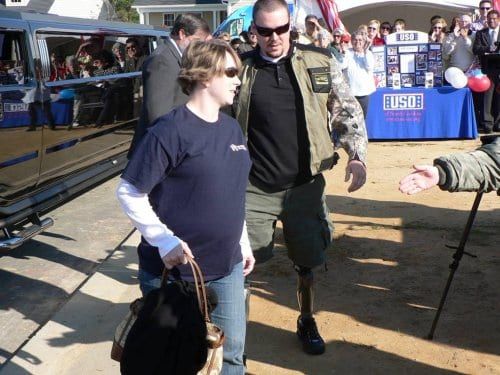 The greater metropolitan area of Raleigh, Durham, and Chapel Hill (and the small towns around and between them) has long been known as the “Triangle,” one of the fastest-growing parts of North Carolina. Triangle Real Estate and Construction Veterans (TREACV) is a group of military veterans in the building and land trade. Among the reasons they came together is a desire to help newly disabled veterans of our current wars get low-cost housing. TREACV joined with the Wake County Homebuilders Association, which was charting a parallel path, and Operation: Coming Home was born in the spirit of honoring those that gave so much.

Operation: Coming Home is why hundreds of soldiers in uniform and civilians from the community were gathered on the red clay of a neighborhood under construction in Fuquay-Varina, NC, that October morning. Local builders, businesses, and volunteers donated the lot, labor, materials, fixtures, paint, trim, money, and furnishings to complete a custom-built, fully furnished home for the Bozik family.

An honor guard of Patriot Guard riders led the procession into the neighborhood, followed by a military band from Fort Bragg. When the Boziks emerged from the limousine, it was to the applause of those who had helped make this dream a reality, and those of us who would be their new neighbors.

The overflight of three Blackhawk helicopters in formation and their subsequent landing in the neighborhood was dramatic, the drill team’s precision performance thrilling, and the many speeches often quite touching. And when the Black Daggers Special Operations parachute team landed and the team leader presented the Boziks the keys to their new home, it was electric.

But just as powerful — at least in my eyes — is that while this community came together to build a home for the family of an American hero, it wasn’t a one-off affair.

The same people who served as soldiers, sailors, airmen, Marines, and Coast Guardsmen are already planning on building their next Hero’s Home for another injured veteran as a way of thanking them for their service. It may be that I get another extraordinary neighbor or neighbors. It may be that they build their next veteran’s home in another community in the Triangle. It could be that another group somewhere near you is charting a similar path, as is occurring across the country.

As we sit down with our loved ones this Thanksgiving, remember those who have made life-changing — and life-ending — sacrifices so that we may live in a free land with so much to be thankful for, and perhaps consider saying a prayer for those hometown heroes who do what they can to make sure those sacrifices are never forgotten.