Medicare Reform: Paying for the Cake You Want to Eat

Since Medicare and Medicaid became law in 1965, people have been told: “You can have your cake and eat it too.” You can have the medical care you need and not have to pay for it. (You may think you are paying for Medicare with your payroll taxes, but in fact those taxes cover less than 1/3 of your projected health care costs.)

For decades, Medicare and Medicaid have been paying for health care with no one facing the difficult question: “Is what we are purchasing worth the cost?” Not the doctors, nor the “beneficiaries” — and especially not the politicians. Doctors get income; patients get health care; politicians get votes — all with the carefree ease of paying for it with other people’s money while simultaneously ignoring the debt looming larger and larger behind the proverbial curtain.

Before the government created the means to “tax, spend and go into debt” for health care, people had to make those difficult decisions for themselves looking at their own resources, unable to take advantage of their neighbors’ bank accounts — at least not without directly asking. The family’s doctor would talk with his patients about the pros and cons of various treatment options, including the cost. Some of the time that meant forgoing treatment in order to “save the widow the farm.” Tough choices? You bet. Sometimes tragic? Without a doubt. But it kept us living consistent with the reality of limited resources and personal responsibility, preventing the drift off into fantasy land where every need can be met by reaching into our neighbor’s (or our children’s) pockets while they aren’t paying attention.

America needs to grow up. Or maybe people just need to understand the problem better. Polls show that a majority of people want to cut the deficit but not touch the two biggest expenditures of federal money. This illustrates just how out of touch with reality we have let ourselves become. Medicaid and Medicare are 23% of the federal outlays. Add in Social Security and we’re up to 43%. Even if we eliminated the entire “discretionary spending” category we’d only be cutting out 18% of the budget. 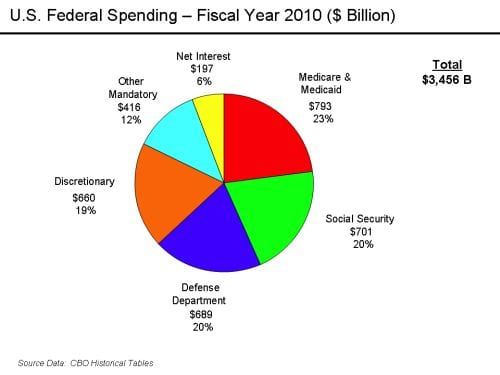 Even the New York Times is starting to acknowledge the problem:

Sooner or later, Democrats will have to admit that Medicare cannot keep running as it is — its medical costs are running out of control.

If we ever slow health care cost inflation to a sustainable pace, it will be because we learn how to ask 3 simple questions when thinking about a medical treatment:

• Does it improve quality of life for the patient?
• Does it extend the patient’s life?
• How much does it cost?

While these are reasonable questions to ask, they are irrelevant to the fundamental political question: who gets to decide whether the cost is worth the benefit? In a Washington Times editorial, Dr. Mark Neerhof poses this question as it relates to the choice between Paul Ryan’s premium support plan and the IPAB of the current health care law. These need not be our only choices, but any approach which (like these two) collectivize the payment and delivery of health care, decisions about who gets what treatment will be inherently politicized. That’s another way of saying it won’t be us setting our own medical and financial priorities.

If you want to choose the cake you are going to eat, you had better be willing to pay for it.