The Skunk at Your Door: The Sadistic Narcissist with the Very Large Suitcase

Millions of people believe they have strong contenders for the dubious distinction, but I believe that I have the most intolerant, cruel, condescending, nasty, insulting mother-in-law (MIL) in history.

Luckily for me and my three sisters-in-law, our MIL and late father-in-law had four sons and she visits a different one each Thanksgiving.

The ordeal we each experience occurs, like presidential elections, once every four years.

This is my year. Two days from today, she’ll pull up to our modest, clean, well-organized, happy home in the limousine she hires to bring her from the airport (she refuses to have us meet her, preferring to arrive in a chauffeured sedan) and start right in.

Although my husband and I will have spent Wednesday night cleaning our toilets and bathroom sinks with all the strength we can muster, she’ll complain about some invisible-to-other-human eyes bit of something that only she can see.  This will continue throughout our house. Wherever she sets foot, she’ll find fault.  Or dust.

Four years ago, I organized our books by color and thought they looked gorgeous.  She walked in, took one look, and announced, “Only an illiterate would organize books by color.”  I later learned that President Dwight D. Eisenhower, one of her idols, organized his library exactly that way.

She’s the pundit of the put-down.  I’m always blindsided by her verbal assaults.  They seem to come out of nowhere.  My husband tries to stay away from her as much as possible, and I don’t blame him.  He’s had to put up with her for 54 years.  Our children are polite to her but harbor no affection for her.

I know I’ll survive this four-day siege; I’ve done it before. Now that I’m in my 50s, though, I find myself less intimidated than mystified.  Any advice or insight you can provide would be helpful not only to me, but also my three younger sisters-in-law.

What you’re dealing with is an unappetizing combo platter of narcissism and sadism, with a side of condescension.  She and others like her are beyond disagreeable.  They’re unconscionable. Here are a dozen ground rules that may help:

1)    Prepare to be blindsided.  She’ll blindside you this year because she always has and always will.  If you remind yourself that these brutal comments will come at you when you least expect them (such as when you were so understandably delighted with your color-coordinated library that you never imagined she’d go after you for that), you can at least tell yourself afterward, “I could see that one coming.”

Such people have a bat-like radar that can detect when the other person is expecting empathy or appreciation: that’s when they strike.  To you it comes out of the blue, but to the narcissist it’s the perfect moment to pounce and inflict maximum distress.

2)    Although it may be comforting to imagine scenarios in which you tell her something so persuasive, so wise, and so overwhelmingly right that she’ll change her ways, there will never be a conversation with her that will produce an outcome satisfying to you.

People such as your MIL are inflexible, and don’t mellow with age.  That’s because they’re not wines, they’re poisons — and therefore forever toxic.

3)     Here’s the key to her behavior:  It isn’t that she’s trying to be congenial and failing.  That’s not her goal.  It would be yours, but it isn’t hers.  She wants others to feel inferior to her.  That’s her aim. That’s why she comes to visit.

4)   Despite enjoying inflicting humiliation on others, people as hurtful as your MIL feel mortification within themselves. Although they certainly don’t show it,  they’re filled with shame. They project it outward and try to make others feel belittled, weak, and better still, too stunned to reply.  They lack the basic emotional and psychological components necessary for kindness and empathy.

5)    “If only she realized how cruel she is, wouldn’t she want to change?” one could ask.  Answer: No. She enjoys it too much — that’s her ingrained sadism.

6)   How to cope?  Expect nothing kind, warm, humane, generous-spirited, appreciative, empathetic, or sympathetic.

7)   Learn not to take her most insulting affronts and put-downs personally. Why?  Because this is how she treats everyone close to her.  She is capable of behaving herself when she feels she must.  But she doesn’t feel she must with you or your sisters-in-law.  So she won’t.  Not this year.  Not ever.

In the past, you may have perceived her like this:

Whenever you see her, especially when she sprays you with taunts, think of the following photograph.  It will serve as a vivid image of the problem at hand — her.  Perceiving this long-term problem from a new angle may help you see her from a different perspective.  Feel free to print it out and keep it in your pocket all weekend as a friendly reminder from me to you of who and what you’re dealing with: 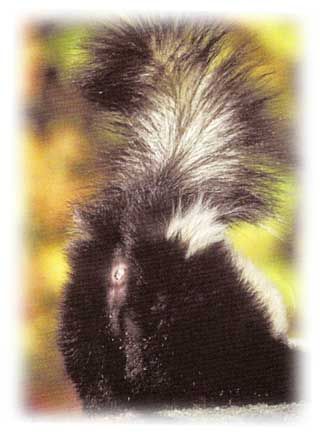 9)  Knowing this, you’ll now be fortified and better able to smile quietly to yourself whenever one of her nasty comments comes flying your way. Instead of reacting in pain, you’re now in a position to say to yourself, “I’m being sprayed with malice not because I didn’t clean the toilet carefully enough, iron her bed sheets adequately, or show her all the worshipful respect she craves, but because she sprays virtually everyone in her vicinity. She feels shame 24/7 and will do whatever she can to make others feel even more insignificant and uncomfortable than she feels.”

She’s not into providing others with solace, only with disdain. Expect no more.

10)  Remember no one can make you feel inferior without your cooperation.

11)  Don’t complain about her to your husband, placing him in the impossible position of defending her.  Think of her as the price you pay to live with the man you love and the children you have together.  For four days every four years, the price is sky-high. But like everyone who’s been through some form of hell, you will survive and flourish.  She is, as James Joyce’s character Stephen Daedalus said of history, “a nightmare from which [you are] trying to awaken.”  And you will — on Monday morning.

12)   Until her limousine carries her away, anticipate the worst, don’t be blindsided, and know that you’re not the target.

You’re only getting sprayed because (A) she’s a skunk, (B) she feels defensive, and (C) you’re nearby.

Try to play the duck to her skunk by letting her poisonous comments roll off your back.  Those stinging insults say everything about her and nothing about you.

Do you have questions?  Belladonna Rogers has answers.  Send your questions or comments about politics, personal or cultural matters, or anything else that’s on your mind, and Belladonna will answer as many as possible.  The names, geographic locations and email addresses of all advice-seekers will be kept confidential. Names and places and will be changed to protect the identity of the questioner.  Send your questions or comments to: [email protected]