A Tribute to the Peerless Iranian Icon, Siamak Pourzand

My father, Siamak Pourzand, committed suicide on Friday, April 29: he leaped from the 6th floor balcony of his modest and solitary apartment in Tehran as a final stand against an Iranian regime that did everything to break his spirit. No one in our family thinks of it as suicide so much as a reiteration of his free spirit. He flew to the arms of liberty, and once and for all plunged his dagger clear through the heart of the inquisitionist regime in Iran.

In his marvelous tribute article to my father, Ben Cohen likened him to several national heroes who committed suicide in protest against the respective tyrannies they lived under; Ben mentions that my 80-year-old father was the oldest of them. Yet my father was young at heart, a trait he showed by befriending young and patriotic student leaders such as Ahmad Batebi — with whom he shared a prison cell.

My father was one of the most notable leaders of Iran, and though he was an icon inside Iran, the international media never gave him the recognition he deserved. So it is to that end that I am penning this tribute to him in death. To know him is to know about the invisible hand of modernity still persevering in Iran.

Importantly, his name had been on the short list as a future head of state, had he lived to see the removal of the inquisitionist regime of the Khomeninists. But to the Iranian state and to its autocratic mullahs he was anathema.

My father loved the West but he embodied the ideals of “the Iranian” — a true son of Cyrus the Great. He was a progressive and worldly individual who did not in any way forgo his national identity in order to assimilate to any other culture, yet his profound love and appreciation of his roots was the thing that made it easy for him to adapt to and appreciate Western civilization.

My father rejected ideology and institutionalized weltanschauung. For that, he became a hostage of Iran’s Shiite mafia, which has conspired against intellectualism and modernity and against which the Iranian people have fought tooth and nail for over 120 years. He was above all a patriot and he respected anyone who was a patriot as opposed to a partisan.

One of my father’s talents was bridging the political gaps; he took it upon himself to know people from across the ideological spectrum. His ongoing debate with all those whom he disagreed with was not only cordial but lively and civilized.

My father knew God but he believed in the spirit of free inquiry and thought worshipping should be a private matter. He was suspicious of collectivism in the name of God.

He came from a long line of military men, though at 17 he was expelled from military school for playing hooky a dozen times. My grandfather — the general — realized that his eldest son would not be carrying on the family’s tradition, so he enrolled him in a high school that encouraged his talents as a writer. He never made it to college; when I have told people who know something about him this fact, they are invariably astonished. He was truly a learned, educated, and eloquent man and his intellect enchanted the brainiest.

At 18, having already been published in several important newspapers and journals in Iran, my father was offered the position of the city beat reporter of an ailing but respected newspaper titled Aatash (fire). This was during the era of Mossadegh, a period marked by passionate political exchange and slippery maneuvering by political parties: most obviously by the nakedly pro-soviet Toodeh Party. Iran was adrift, and my father and his group of young journalist pals (most famous among them, the teenage Amir Taheri) covered the daily intrigues throughout the country. The Cold War era was a hotbed of ideological topsy turvydom in Iran; but considering all of that my father remained squarely focused on freedom.

During the ‘50s, a time when most Iranians were only concentrated on internal affairs, my father was a window to the outside world. From the political and movie scene in India to the French new wave and Italian neo-realist cinema, to Eisenhower and General MacArthur, to Elvis the Pelvis, Khrushchev and Castro, Mao … you name it, my father pursued and covered. Every newspaper and media outlet he joined he singlehandedly turned into a gold mine with his innate feel for news that would fire the public imagination.

During that time in Tehran, my father organized salons, rock n’ roll danceathons, bike races, marathons, fashion shows, and much more in the way of fresh and fun events. He opened the first Cine Club where intellectuals and film enthusiasts could watch the latest movies from around the world. He essentially created the aesthetic arena for Iranian cineastes to flourish; the Kia-Rostamis and Panahis of Iran owe their careers to my father’s efforts and vision. My father launched the very first film festival in Iran that even now is continued under the mullah regime, the Fajr Film Festival. It was also my father who launched a magazine called Setaareh’yeh Cinema (Movie Star).

This was when my parents met. My mom, who was my father’s first wife, was also a young intellectual interested in so many of the creative enterprises that my father was spearheading. The two of them became something of a team. She worked and traveled right alongside him, doing everything from interviewing and reporting to spending her wedding night with him at the printing house, typesetting.

In the late ’50s, the innovative publisher of the Kayhan publications, Dr. Messbahzadeh, threw his support behind my father and sent him abroad to cover everything from politics to culture, film, and current events around the world. (After the Khomeinist takeover of Iran, Kayhan moved to London — to this day, that publication is known as the main Iranian media outlet.) Without any contacts or anyone pulling strings for him, he met, interviewed, and wrote about people and events that I can only describe as historic. To name a few:

Throughout the ’60s, my mother and father lived in Los Angeles, where my mother went to college and grad school and where he continued his film and political reporting. He took me to sets, where I met Alfred Hitchcock, Julie Andrews, Paul Newman, Red Skelton (whose TV show at the time was my favorite), Bob Hope, Danny Kaye, Billy Wilder, and Walt Disney. He became close friends with Steve McQueen, with whom he would go motorcycle riding through the Hollywood hills and the canyons. He got an enormous kick out of McQueen calling him “Mack.” 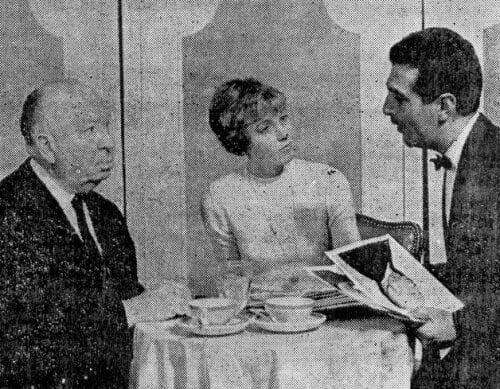 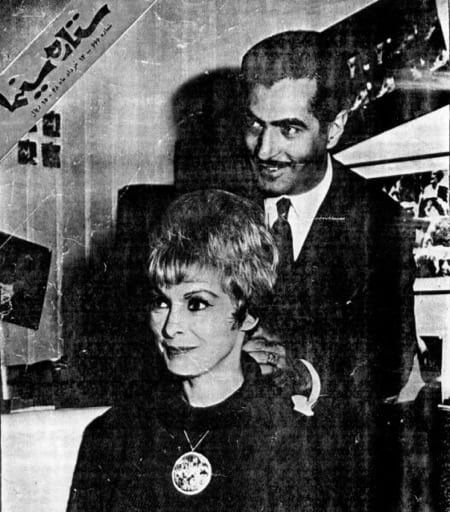 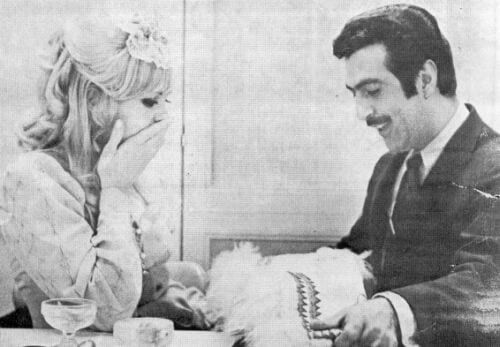 After the Khomeinists took Iran in 1979, my father, back in Iran, remained there as he believed a theocratic revolution could be the death of the Iranian cultural evolution. Knowing that Shia dogma was anathema to patriotism, and that the Khomeinist riffraff would try to destroy all things Persian (as well as annihilate all intellectual and modernist strides Iran had made), he took it upon himself to stay behind as a guardian of the Iranian identity and as a modernist. He was arrested several times and served long months in prison, being interrogated and insulted by thugs. My father endured psychological and physical brutality, his affable demeanor confounding the regime agents.

Finally, in 1990, he was able to get his passport and leave Iran for a long trip to visit his younger brother, my uncle Lohrasp, whom he worshipped, in Paris. After his visit with my uncle, he came to visit me in New York, a city he loved and had visited many times; he had interviewed Audrey Hepburn, George Peppard, and Blake Edwards on the set of Breakfast at Tiffany’s.

Sadly, in 1991 he decided to return to Iran, where, once again, he was instructed by the regime to report to the infamous Evin prison. He served several months, during which time he was severely beaten several times and had his teeth broken.

When he got out of prison in 1992, a reign of terror against intellectuals, journalists, and anti-regime opposition leaders — now referred to as the Chain Murders — was in full swing. Most of the victims were either friendly with my father or lifelong friends.

In November of 1998, two of his old friends, Darioush and Parvaneh Forouhar, were slaughtered in their own home. Out of rage and frustration my father decided to break his silence, and he covered live the massive national funeral and march that was organized. He called in his report via cell phone, a new item in Iran, to the Los Angeles-based Iranian radio station KRSI. This was the most important piece of reporting that my father did after the Khomeinist takeover. The report went on for hours as he described in detail every aspect of that event.

This was when the Iranian regime began to actively and viciously target my father. In 2001, my sisters and stepmother had traveled abroad while my father had stayed behind in Tehran. One night, as he visited his sister’s house, he was kidnapped by regime agents. For weeks we didn’t hear a peep, and though we knew full well that my father was being detained, the Iranian regime played heinous mind games with our family.

Nothing remains of anything he ever wrote, as the Islamist regime’s agents destroyed every last paper, photo, document, and memorabilia when they ransacked his house following his kidnapping. What little my family has left consists of material that we were able to take out of Iran with us or that he had sent us throughout the years. For years, my sisters Leily, Azadeh, and I talked about doing a film about our father’s exceptional life, and since we had nothing but photos, Azadeh interviewed him over the phone while he lived under house arrest these last years. Family members and friends each have their memories of him.

On April 29, the last thing I was expecting was news of my father’s heartbreaking suicide. As the coroner took my father’s body to the Tehran morgue, the regime’s thugs were yet again ransacking my father’s every belonging, taking even the suicide note he had left behind.

Then every detail of his burial became more and more surreal. First, my family tried to bury him in our family plot, but the regime refused. Then they tried to have him buried in the area of Tehran’s Behesht’eh Zahra cemetery where cultural figures of Iran are laid to rest, but the regime refused that, too. Instead, they assigned a plot in a dusty and desolate part of Tehran’s vast and depressing cemetery. The regime’s thugs, who had surrounded the area of his plot, frisked every single person who attended the burial, confiscating their phones and cameras. Then they surrounded the grave, preventing the nearest and dearest from properly participating in the internment. They refused all memorial services or wakes for my father, fearing these would trigger anti-regime riots.

Following my father’s passing, my entire family has received calls and emails from well-wishers around the globe. But on May 4 a caller tried to intimidate me — having received several calls from the regime’s agents before, I knew the tone and realized that it was once again they who were trying to threaten me.

My youngest sister Azadeh told Michael Weiss of the Telegraph: “An aspiring nuclear power is terrified of an 80-year-old man. What does that tell you?”

According to reports, 450 Iranian journalists and bloggers have had to flee Iran for fear of meeting my father’s fate, while 48 journalists are in prison or under house arrest. Iranian filmmakers Jafar Panahi and Mohammad Rasoulof have each received six-year prison sentences.

As the world grapples with the “Arab awakening” and the continued string of anti-government protests throughout the Middle East and North Africa, the Iranian finger print can be seen in every instance, trying to manipulate and maneuver each nation’s fight for freedom.