In retaliation for the UAE and Saudi Arabia’s decision to deploy troops to Bahrain, Iran’s hardliners have called for the deployment of suicide bombers there in support of the Shiite protesters.

Iran-Bahrain relations hit an all-time low when the Sunni government of Bahrain called on the Gulf Cooperation Council countries to dispatch troops to Bahrain to assist in quelling the uprising by majority Shiite Muslims against the Sunni leadership. Now six people are reported dead and hundreds injured.

It is unclear how much of a role the Gulf forces played in quashing the protesters. Demanding an answer, Tehran summoned the Saudi ambassador and recalled its own ambassador from Bahrain. Now there is also news that Basiji, the auxiliary Iranian militia, have attacked the Saudi consulate in Mash’had and broken its windows.

One Iranian regime-run site, Shia-Online, published a letter from Bahraini Shiites who have made an appeal to Khamenei calling on the Iranian regime for support. Another, Shia News, published a registration form for those wishing to participate in suicide bombings in Bahrain, the Gulf countries, and all around the world. And another (there are hundreds), Reja News, wrote that Saudi Arabia’s intervention in Bahrain is another attempt on their part to try to shift the power base within the Persian Gulf region.

In the midst of this feigned concern for the people of Bahrain, the Basiji students issued a statement that announced the willingness of the “Association of Independent Muslim Students” to travel to the country in a show of support — as auxiliary forces.

The Iranian regime has been active in creating a number of front NGOs whose mission it is to recruit people throughout the Muslim countries where Iran hustles for influence to accept suicide bombing missions. The mandate is pretty straightforward: “action against the Kafer or infidels and enemies of the Islamic people.”

Over the years the Iranian regime has returned to the matter time and again, going so far as to hold registrations. But the fact is it would be a truly rare Iranian indeed, no matter how devoted, who would strap on a bomb and carry out a suicide bombing. So the huge majority of the volunteers are Palestinian, Lebanese, Syrian, Iraqi, Pakistani, or Afghani — “recruited” from anywhere where the Quds force, Taliban, Hezbollah, etc. have a foothold.

For years, Iran has openly boasted about its suicide squads — or, as they’re called, martyrdom seekers. In April 2005, the martyrdom-seeking Palestinian women’s movement, also known as the Zeytoon Girls, gathered in Tehran’s Seyed Al-Shohada Hall where registration for suicide-bombing missions had also been set up for volunteers: 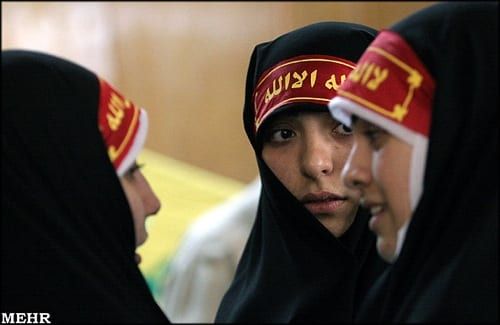 In October 2005, following the creation of the women’s squads, the Iranian regime announced the formation of the men’s squad — “The Men of the Sun.”

By fall of 2005, the Iranian regime claimed to have recruited 40,000 willing martyrdom seekers whom they funded, trained, and protected.

Mohammad-Ali Samadi, the spokesman for the Guardianship of the Martyrs of the World Islamic Movement, said:

We will spread the excitement and strategy of martyrdom-seeking far and wide. During our kindred gathering we paid tribute and praised the Palestinian women martyrdom-seekers, the Zeytoon Girls, by watching films about their lives, operations and training. Fifty thousand people have signed up for suicide-missions. At present, also 1000 of these are trained and are being classified.

Samadi also mentioned that footage was shown from Ahmadinejad’s speech at the “World Without Zionism” conference, where he spoke of Israel being wiped off the map.

For a few years there was scant news of Tehran’s suicide-bombing push, though Iran watchers remained watchful. Then, in October 2009, Alalam News Agency (Tehran’s Arabic language TV) reported that, according to the Kuwaiti Al-Seyassah newspaper, Saudi Arabia, the UAE, and other surrounding Persian Gulf countries are being targeted by approximately 3000 agents and spies of Tehran’s regime. Al-Seyassah added that Western intelligence sources in Berlin have announced that the number of Iranian agents, all located in the six-member Cooperation Council of the Arab States of the Persian Gulf, are mostly members of Lebanese Hezbollah. According to these sources, approximately 800 of these individuals are employees of the Iranian embassies and consulates in the six Gulf countries — protected by diplomatic immunity. These agents oversee the provision of financial help to the various cells, in equipping them with explosives and blueprints for (terrorist) operations in case of a military attack on Iran.

Is there any good news? A high-ranking commander in the Revolutionary Guards and an IRGC “political analyst,” Yadollah Javani, has claimed that Iran has no intention of sending troops to Bahrain. According to Javani, Iran will support Bahrain morally.

They won’t send troops, in other words, because that will in fact look like out and out war, and Iran never overtly fights its own battles. It finds useful idiots to do its dirty work.