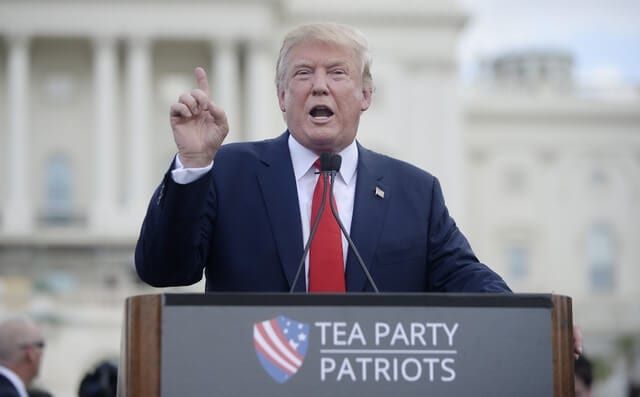 Last week, National Review’s Jim Geraghty published what may be the most insightful essay yet on the difference between the conservative movement and Donald Trump and his followers. Geraghty has noticed a telling reticence on Trump’s part to utter such words as “freedom” or “liberty.” By contrast, Geraghty notes that Wisconsin Governor Scott Walker used the word “freedom” six times in the 179-word announcement of his plan to replace ObamaCare, and Ted Cruz used “freedom” twice and “liberty” eleven times  in his announcement speech at Liberty University, not counting references to the university itself.

The reason for this lack of keywords is that Trump’s principles are very different from those who are inspired by the likes of the late William F. Buckley; he is indifferent to the size and scope of big government and quite indifferent to Constitutional guarantees of citizens’ rights. For instance, Robert VerBruggen pointed out several months ago that Trump has not only been a serial abuser of the eminent domain provision of the Constitution but, having lost a case in which the state of New Jersey tried and failed to dispossess an elderly widow of her property on his behalf, even welcomed the disastrous Supreme Court decision in the Kelo case in 2005.

All of Trump’s campaign rhetoric centers on power politics — strength, American greatness — often in terms which would not look out of place in a speech by some nationalistic autocrat. And this doesn’t appear to bother his followers one bit, or at least no more than they are bothered by his disgusting boorishness concerning women (ask Megyn Kelly and Carly Fiorina) or his schoolyard-bully taunts of any Republicans who criticize him (as Bobby Jindal and, most recently, Rick Perry and Ben Carson can testify).

But what I find truly shocking is not Trump’s behavior, which has been on display for decades, nor his ability to attract a certain type of follower. What I find shocking is Rush Limbaugh’s defense of Trump in the face of Geraghty’s analysis.

On September 11th, Limbaugh read Geraghty’s piece on air, and then responded by alleging that Trump doesn’t need to use those keywords because he embodies freedom and liberty in his actions, and is indeed the object of envy for those who don’t innately exhibit those qualities.

The reason I’m shocked comes from Limbaugh’s assertion that he hasn’t endorsed any of the candidates. Yet he and several other talk-show hosts have been instrumental in empowering Trump. They imply consent of his boorishness, effectively egging him on to say ever more outrageous things while Limbaugh and company blow on the glowing coals of rage at the perceived Washington establishment, regardless of party. What Limbaugh has done here is to conflate license and libertinism with freedom and liberty, and he’s surely sophisticated and intelligent enough to know the difference.

I am not suggesting that the frustration may not be justified; I’m suggesting that the rage buoying up Trump’s campaign is a very dangerous and ultimately counter-productive political emotion, one which threatens  to trump (pun intended) the principles on which the movement has been based on for the last 60-odd years.

Far from being a champion of liberty in any rational sense, Trump is the embodiment of crony capitalism. In the first Republican debate, and several times subsequently, he has openly boasted of borderline, if not actual, political corruption, quid-pro-quo contributions and payments he has made to politicians at all levels in order to secure favors for his projects. He is (as I mentioned above) wholeheartedly in favor of government misuse of eminent domain and the disastrous Kelo decision of SCOTUS.

Trump represents, as Leon Wolf has eloquently written in Red State, not any sort of conservatism, but a right-wing mob similar to the left-wing mobs evident in such phenomena as Sanders rallies and BlackLivesMatter. About a month ago, I suggested on this site that this was a worrying phenomenon on the Republican fringe. Now, I’m not so sure. As I’m sure Victor Davis Hanson would agree, this was precisely the Achilles’ heel of Greek democracy which made our founding fathers so wary of direct democracy. When any issue passionately polarizes a society with no chance of compromise (e.g., abortion is either the termination of a human life or potential human life, or it is the excision of a group of cells, no more significant than paring your fingernails, two positions between which there can be no compromise), two mobs will materialize and think with their glands rather than their brains, resulting in what the Greeks termed stasis, in effect, civil war. Inevitably, both mobs end up baying for the restoration of order, and usually a tyrant rides to the rescue.

As poet and playwright Zoë Akins first said in the title of a long-forgotten play, the Greeks had a word for it.

Is Trump, together with the American left in general, right? Has the carefully constructed, politically balanced and fine-tuned system created by our founding fathers deteriorated to the point where two angry, unprincipled gangs interested only in crushing the other side and exercising naked power confront each other like schoolboys shouting taunts at each other over a line drawn in the sand?

That, my friends, depends upon us.

How the Left Can Shut Down Rush Limbaugh