Bibi in Serious Trouble with Only Days to Go Until Election

The numbers in this last week of polls before the ultimate poll, the general election, are quite stark: 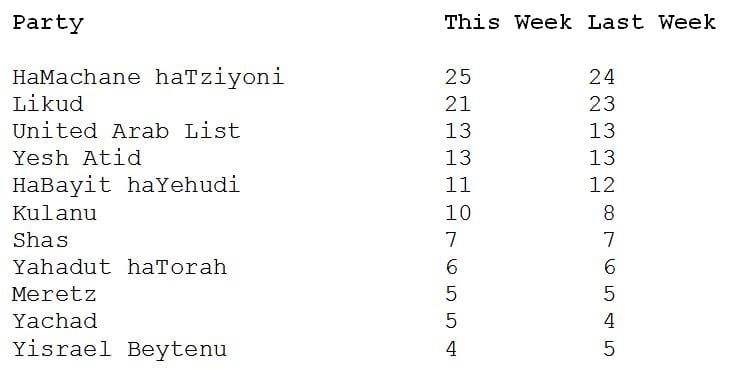 The actual polls summarized here show HaMachane haTziyoni fluctuating between 24-25 seats, but Likud is stubbornly stuck at 21 for the week in all major polls; the United Arab List has shown signs of weakening slightly, fluctuating between 12 and 13 (though the preponderance is still 13). Kulanu appears to be surging ahead; Yachad seems to be winning the nationalist ideology wars with HaBayit haYehudi; and the scandal-ridden Yisrael Beytenu sinks ever lower in the polls.

It is still very hard to see how the Left builds a viable coalition out of all this. The natural allies of HaMachane haTziyoni are Yesh Atid and Meretz; with the above numbers, that gives them a total of 43 seats. It is getting beyond that number that is the challenge. Obviously, none of the nationalistic parties will join; the Arab List has been issuing categorical statements that it will not join any coalition (the name of the new center-Left party, HaMachane haTziyoni (“The Zionist Camp”), designed to appeal to Jewish voters, is a serious symbolic problem for the Arabs), but even if they did, that would only get them to 56 seats.

Probably none of the remaining parties would join a coalition with the United Arab List. If we go back to the original core of 43, it is possible that Kulanu might join, raising the total to 53, and perhaps even Yisrael Beytenu (which has a vote-sharing agreement with Kulanu), adding 4 more, but none of the religious parties will have anything to do with Ya’ir Lapid’s Yesh Atid (Shas and Yahadut haTorah have an agreement to vote as a bloc, and Rabbi Ya’akov Litzman, chairman of Yahadut haTorah, has said adamantly that there are no circumstances under which they will join a coalition with Yesh Atid).

A coalition of the Right is still just barely possible. Likud’s natural ally is HaBayit haYehudi, yielding 32 seats. Add to this number Kulanu (10), Shas (7), Yahadut haTorah (6), and we arrive at 55. If (as is widely expected) Yachad splits over willingness to join a coalition, at least 3 of its 5 seats would join, yielding 58; add Yisrael Beytenu’s 4, and a coalition with 62 seats emerges.

This would be a very fragile coalition; it has been widely reported that this entire electoral crisis was caused because Avigdor Lieberman, chairman of Yisrael Beytenu, vetoed the idea of bringing Shas and Yahadut haTorah into the coalition to replace Yesh Atid when Lapid was fired as finance minister, but it could be built, if only on a second round, after HaMachane haTziyoni fails. One small ray of hope has been President Re’uven Rivlin’s earnestly expressed desire that a government be formed “as soon as possible” after the election, which suggests that he may prefer the likelier coalition over the mechanical choice of the party with the most seats.

A major question is generated by these numbers: Why is Netanyahu performing so badly?

There are at least three reasons for this. The first is the simple desire for change. One of the polls this week found that 72% of the electorate simply want a change, and feel that the country is moving in the wrong direction on socioeconomic issues. Remember that Netanyahu has been prime minister for nine years, as the cost of living and especially of housing has been spiraling out of control.

The second is linked to the first. The old saying is that “familiarity breeds contempt.” While Israel faces existential issues — the steaming cauldron of instability and violence surrounding her, the threat of an Iranian nuclear bomb — which seem to loom large in the U.S., the fact is that every Israeli has been living with such threats his entire adult life. Most Israelis serve in the military, and open warfare becomes a reality every few years; so what else is new? There is a sense that the average person can’t do much about foreign policy and defense, but the question of a full refrigerator and an affordable apartment looms large. Thus, domestic issues greatly overshadow the international ones; Netanyahu and Bennett have been beating the kettle-drum for so long that it elicits a right-to-left yawn.

And the third is the proliferation of scandals. The lawsuit filed by the former manager of the prime minister’s residence alleging abuse by Mrs. Netanyahu; the scathing comptroller’s report documenting hundreds of thousands of shekalim misspent both on the residence and on Netanyahu’s private home, at a time when government has been crying for austerity all hit home, and none of them look good.

A day of reckoning is about to dawn, and the final outcome remains to be seen; stay tuned for the next report on the actual election results.