When Iranian toy seller Masoumeh Rahimi thinks of Barbie and Ken dolls, she thinks of heavy artillery — only worse. “I think every Barbie doll is more harmful than an American missile,” Ms. Rahmi told the BBC back in 2002. In April 2008, Iran’s top prosecutor and religious cleric, Ghorban Ali Dori Najafabadi, upped the anti-Barbie campaign by calling for a ban on the sale of all Barbie dolls from the country. “Barbie is an emissary of nudity and promotes moral corruption,” wrote the hardliner newspaper Kahyan.

Barbie and Ken have been picked on by Islamic leaders for years, since Saudi Arabia announced it was banning the sale of Barbie from the kingdom in September 2003, stating on its official website:

Jewish Barbie dolls, with their naked clothing, lewd positions, and different samples and accessories, are symbols of decadence of the perverted West.  Let us recognize their danger and worry. 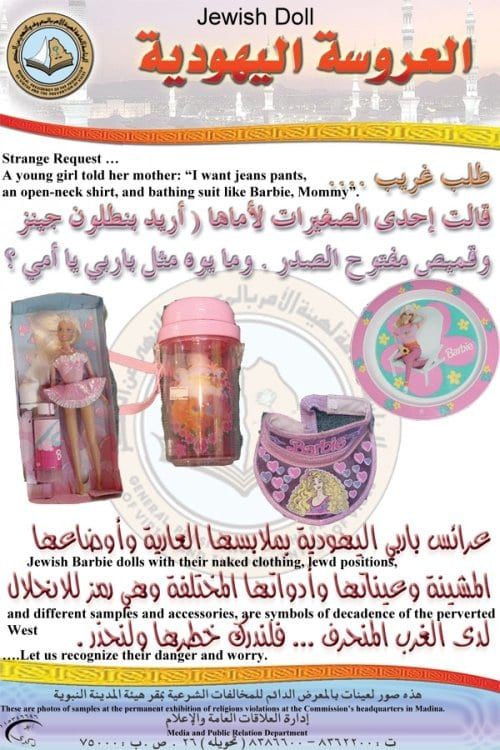 The ban-Barbie effort was huge. The religious police, or Mutaween, hung colorful posters outlawing “Jewish Barbie dolls” in schools and hospitals across the country. For a while, photos of confiscated Barbie dolls were posted on the government website.

The anti-Semitic tirade came after the Mutaween learned that Barbie’s creator, Ruth Handler, was Jewish — and that the American businesswoman, entrepreneur, and U.S. Business Hall of Famer had named the dolls after her two Jewish children, Barbie and Ken Handler.

But it appears not all religious clerics are doing their homework about which Jew created what incredibly popular icon. Last summer, Hassan Nasrallah — the leader of the terrorist organization Hezbollah — appeared proudly depicted as Superman in the Palestinian daily newspaper Al Ayyam. In the cartoon, Nasrallah was pictured pulling back his religious robes, a la Clark Kent, to reveal a Superman suit underneath. Superman is Lebanon’s most popular superhero. Many teenagers believe him to be Lebanese because of his dark, swarthy looks. But if Barbie is “Jewish,” so is Superman; he was created by two Jews named Jerry Siegel and Joe Schuster, in 1932. 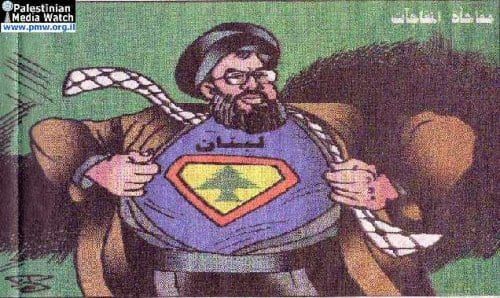 The same goes for just about every other “Jewish” superhero, many of whom are growing increasingly popular throughout the same countries in the Middle East. This summer, audiences from Egypt to the United Arab Emirates (UAE) flocked to see movies about Batman, Iron Man, the Hulk, and the X-Men — all as “Jewish” as Barbie and Superman are. Each of these superheroes was created by a Jewish-American comic book writer. 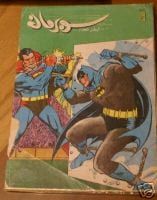 It’s a slippery slope, banning cultural icons of the Western world, whether they are deemed immoral, Jewish, or just plain insulting to someone’s religion. Last summer, the supposedly secular UAE banned the Indian film God Tussi Great Ho on the grounds that it was un-Islamic. (The movie is considered a remake of the 2003 Hollywood film Bruce Almighty.) And in 2006, Egypt — another allegedly moderate state — banned two major newspapers, France’s Le Figaro and Germany’s Allgemeine Zeitung, claiming that both papers printed articles that insulted Islam.

With Barbie banned first from Saudi Arabia and now from Iran, one wonders who or what is getting the hatchet next.