Stop the Executions in Iran!

No person shall demonstrate. Arrest or shoot!

The troops were transported to the capital from the nearby city of Karaj. In the afternoon, there were a few skirmishes between the troops and civilians, but apart from that … nothing happened.

Strange. Why did Khamenei give these orders? The opposition had nothing planned for that day — so clearly the supreme leader had been fooled. Around 10:00 p.m., all troops were sent back to their barracks.

This sort of confusion has a political price, especially in these days of ongoing crisis. If Khamenei shows he doesn’t know what’s happening, even his loyal supporters may begin to suspect that he has lost his grip. Fear is the only phenomenon for which the Islamic tyrants are prepared to take off their hats or turbans. The apocalyptic ayatollahs only back off when they are afraid.

As they are today.

Khamenei’s Chinese friends are racing to deliver new weaponry for the suppression of the demonstrators. They consist of large armored vehicles with water cannons, made in China by Dalian Eagle Sky-Co. They were delivered this week in the port of Bandar Abas in southern Iran. The picture below, taken by the opposition, shows these weapons from which water, paint, and chemicals can be sprayed under high pressure: 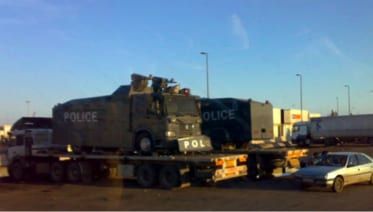 These weapons go hand in hand with the “China model” of dealing with a domestic uprising. The model calls for hard, brutal, swift, and comprehensive action against civilians. It includes the preparedness of the rulers to execute thousands within a short period. Khamenei doubts the loyalty of his armed units, and therefore he has not yet decided to fully implement this all-out confrontation with the people.

But Khamenei has agreed to start the executions of opponents. In Sirjan, they recently tried to hang two young men in public. But there something happened that I and no human rights supporter ever dared to hope. The people rose up to save the would-be victims. Then the agents of Khamenei got angry, shot at the crowd, and killed another three innocent civilians.

Ali Sarmi, a political prisoner, was sentenced to death on December 31. He was arrested nearly two years ago because he participated at a commemoration of the mass executions that had taken place in the 1980s.

The last picture of Ali Sarmi

Sarmi is not a young firebrand; he is 62. What crimes has he committed? None. How long has he been in prison? A total of 23 years. Three years under the shah, and twenty years at the hands of the Islamic Republic. In the past thirty years, he was arrested four times — an Iranian Nelson Mandela.

The Iranian rulers, the chairman of the judiciary, the president of the parliament, and the generals of the Revolutionary Guard have in recent days asked for the execution of the members of the opposition and the demonstrators. Ayatollah Jannati suggested on January 1 that for this purpose the same kind of judges are to be used as were used in the 1980s — “revolutionary” judges who could pronounce a death penalty within ten minutes.

Clearly, something should be done on behalf of the Iranian people. Can we, the free peoples of the West, help those threatened in Iran? We can certainly try.

The political parties in parliament have to start acting, demanding that their foreign policy officials call for an end to these criminal acts, and insisting that all political prisoners be released at once. Security Council members — above all, the United States — should put these matters on the agenda.

The nuclear negotiations with Iran are a failure. The ultimatum given by President Obama to the Islamic regime has already expired. The Europeans and Americans have their own self-interest to protect these defenseless people — how will they explain their silence to their children and grandchildren?