Turn Out the Lights of Europe When You Leave, Pope! 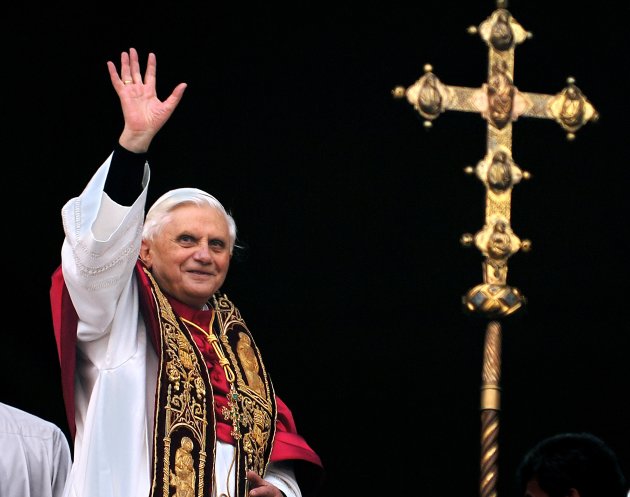 So long, you relativistic suckers!

I write this hesitantly because it’s way outside my areas of expertise (action movies and things that explode in the microwave). Plus I’m not even Catholic. But I think Joseph Ratzinger — aka Pope Benedict XVI — is one of the greatest men of the age — possibly the only great man of the age — and almost certainly the last great man Europe will produce. As far as I’m concerned, he should turn the continent’s lights out as he steps down at the end of the month.

B-16’s greatness doesn’t lie in his papacy. Or that is, if it does, I wouldn’t know. It’s his writing, his theology, his thought that elevate him in my mind. When I was but a youngish dude, pounding my way through the great works, it seemed to me that the wisdom of many of the great German thinkers of the 18th and 19th centuries had been thrown aside for no good reason. Kant and Hegel had philosophically rescued the essence of Christianity for the scientific age, and had been ultimately left behind by mainstream thinkers not because they were wrong, but because they were just sort of out of keeping with the atheistic spirit of the day.

As Nietzsche understood, that God-is-dead zeitgeist would perforce lead to moral relativism. And so it has. But Ratzinger, shrugging off the zeitgeist like the cheap suit it is, humbly went on tilling the Kantian and Hegelian fields, making his way back not just to the essentials of Christianity but to the sacred person of Christ himself.

This is a great act — an intellectual feat that shows the idols of the age — men like Derrida and Lacan and Foucault — to be the mental pygmies that they are. When they are forgotten (which will be around Thursday at 4PM), the writings of Ratzinger will be remembered and read and discussed for their radical divergence away from the wisdom of the age and toward the truth. Or make that Truth.

Anyway, I know the news media will be trying anything they can to make it sound as if B-16 was somehow responsible for the execrable child-molesting business. (As far as I can tell, he had no culpability there and even helped clean up the mess.) And I know they will be focusing their energies on trying to pressure the Vatican into electing a black lesbian midget next or whatever.

But I’d like to see someone more expert than I am in these matters talk about B-16’s role as a philosopher in the great German tradition. It was that tradition that gave us Kant and Hegel and Schopenhauer and Nietzsche. And I think Ratzinger was like one of those.