The Truth About Dorner: Leftism Is Violence

There’s nothing for me to add to the great work already done by SooperMexican, Mediaite, Michelle Malkin, Sean Hannity and others critiquing the media coverage of alleged mad dog cop-killer Christopher Jordan Dorner. The media have been dishonest in trying to cover up Dorner’s left-wing views. They’ve been beyond hypocritical in drawing no link between Dorner’s acts and his politics — after they have repeatedly tried to link acts of violence to conservatism even when, as usual, there was no link to be made. Worst of all, as Big Government has shown, they are beginning to try to justify the slaughter.

Most of the conservative commentators listed above have been careful to point out that connections between a madman and his politics, whether right or left, should only be drawn with caution. And they all say that it’s irresponsible to blame political commentators, right or left, for the actions of a lunatic who may have taken inspiration from them.

I’m not so sure. Violence is inherent in left-wing philosophy, and the violence it inspires should be laid at its door.

Haven’t you noticed this? The American left is always waxing hysterical about right-wing violence and the true violence always comes from the American left. The American news media cry out in horror at peaceful Tea Party demonstrations and look the other way when Occupy Wall Streeters commit vandalism, rape, and even murder. The media try to pin any political assassination attempt on conservatives; yet almost all American political assassinations are committed by the left. If you want more examples as well as proof, read Demonic by Ann Coulter — who, unlike any left-wing pundit I can think of, needs a bodyguard whenever she speaks on college campuses! 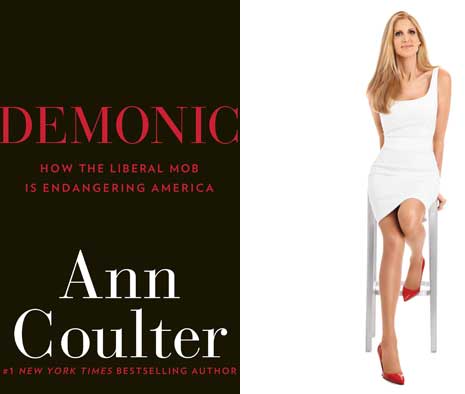 What Coulter calls “Imaginary Violence from the Right vs. Actual Violence from the Left” is not an accident. Violence is an essential part of the left’s approach. The 19th century political philosopher Frederic Bastiat pointed out the fact (that Ayn Rand later popularized) that redistribution of wealth is in and of itself an unjustified use of force against the property of individuals. The fact that it’s a collective use of force in no way legitimizes it. Nor does the sanction of raw democracy which, as the old joke goes, is just two wolves and a lamb voting on what’s for supper. In Bastiat’s words:

Leftism requires this illegitimate use of force — this use of violence — because free individuals simply will not do what leftists, in their wisdom, have decided is right and good.

The left has never bought into the central revelation of the Enlightenment: things are made to work perfectly fine without much control from above. This Enlightenment insight was inspired by the earlier work of Isaac Newton who discovered that God didn’t have to move the stars around in the sky or cause the apple to fall to earth. The Big Dude had cleverly put machinery in place that worked pretty much on its own. The economist Adam Smith translated this insight into economics when he pointed out that individuals working in their own interest frequently promote the interest of everyone as if by an invisible hand. The founders translated the idea into politics by creating a system in which individuals could act without too much government interference. These geniuses didn’t trust in individual goodness, not at all. They trusted in the handiwork of the Creator — that is, they trusted the overall human system was built to work without kings and aristocrats — or a democratic mob — forcing people to do what they wanted.

Jean Jacques Rousseau, the founding saint of modern leftism, rejected that Enlightenment wisdom. He hated the modern world and thought humanity had been better off in a state of noble savagery. In that state, Rousseau believed, men were truly free because their laws naturally followed the general will. If people in the corrupt modern age violated the general will, they had to be “forced to be free.”

The logic of Rousseau led to the guillotine. You can’t say: “Well, it’s no fair blaming the pundit Rousseau for the violence of the madman Robespierre.” The guillotine was inherent in Rousseau’s thought. And it’s Rousseau’s thought — his idea that individuals should be forced to follow the “general will” — that informs all leftist thinking — including, by the way, Obama’s second inaugural address.

So no, I don’t think we should be so quick to disconnect Dorner’s kill spree from the left-wing pols and pundits who inspired it. They are philosophically complicit.

Leftism is violence. It always was.