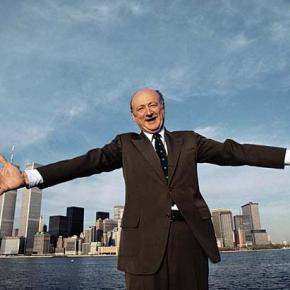 It was Republican Mayor Rudy Giuliani who transformed New York City from the sort of Democrat Hell that we see in Detroit, Chicago, New Orleans, Newark and anywhere else Democrats govern for more than twenty minutes. But to some extent, it was three term Democrat Mayor Ed Koch — who has died at 88 — who made Giuliani’s rescue possible. An honest Democrat surrounded by the usual kind of Democrats, a man with conservative instincts and a liberal heart in the best sense, he used charm and media savvy to get some very tough stuff done, despite the corrupt machine all around him.

Over at City Journal, which also played an important role in New York’s salvation, they recently ran a piece on Koch by Tevi D. Troy called “The Last Sane Liberal.” It’s worth reading in its entirety, but here’s a snip:

In his first term, recognizing the seriousness of New York’s fiscal situation, Koch put aside his liberalism and embraced a program of austerity, management reforms, and limited handouts from Washington and Albany. According to Soffer, “Koch’s tireless and personal lobbying campaign for federal loan guarantees, along with other management reforms, led to a balanced budget by 1981—quite simply the greatest turnaround accomplished by any New York mayor in the 20th century, including Fiorello La Guardia.”

As Koch tells it, his decision to balance the budget a year earlier than anticipated—a decision that made the turnaround seem all the more impressive—was “serendipitous.” A Wall Street Journal reporter had asked deputy mayor Nat Leventhal what it would take to balance the budget a year ahead of schedule. Leventhal mentioned the query to Koch, who liked the idea and brought it up at a staff meeting. After an hour of discussion, Koch asked for a show of hands: Who wanted to proceed with the accelerated plan? The proposal narrowly failed, but aide Jim Brigham noted that many of those voting against it were lower-ranking staff. Koch held a second vote, this time including just commissioners and deputy mayors, and the idea narrowly passed.

The fiscal crises faced by many municipalities, states, and countries today make Koch’s example worth returning to. The New York Times noted that “before [Koch’s] first term was out, the city had regained access to the credit markets and was borrowing again on its own.” The Times praised both the symbolic and the substantive aspects of this achievement: “With the facility of a stand-up comic and the sternness of an accountant, Ed Koch got New Yorkers to accept difficult and unpopular fiscal decisions.”

When I was a radio news writer in the city, Mayor Koch came in to the station for an interview and blew an enthusiastic kiss at my baby daughter. Here’s one back at you, Yeronner. Seeya.