As I’ve said ad nauseum now, it’s a golden age of television — the stuff on the small screen is much better than most of what’s on the big ones — and there’s nothing I like more than to sit down with an Obama Brand TV Dinner (see pic above), and watch me some home entertainment. Here’s a quick look at what I’ve been looking at.

Justified.  This is currently the best show on TV — the best one I’m watching anyway. For all I know, Mob Wives is Shakespearean. But in the eyes of this old crime writer, Justified is crime writing like it oughta be. The tough guy dialogue is sharp. The hillbilly characters are riveting. The deep Kentucky setting is fascinating. The scenes of violence are exceptionally well done: they’re genuinely tense and frightening. There’s a sort of running gag that the villains of the piece are almost universally stupid and ineffective — but that doesn’t stop them from being scary and threatening. You know they’re never going to make the big score, but that doesn’t mean they won’t kill you in the process of trying.

Great cast. Timothy Olyphant has elevated himself here from second rate movie hero to star. Walton Goggins, who was Shane on The Shield, is, within his range, as good as any actor alive. Nick Searcy should have more scenes; he’s hilarious. And Joelle Carter is expertly taking her character on its arc from beautiful loser to beautiful fearsome gangster, and have I mentioned she’s beautiful?

The seasonal storylines can be a little meandering, but all in all, this show is top-notch and keeps getting better.

Spartacus.  Some of you may suspect I watch this over-the-top gladiator drama because it has more naked women per episode than all other TV shows combined, and that just shows what sick, low minds you have. But man, the women really are beautiful! The third season got off to a wobbly start. The tragic death at 40 of the original star, Andy Whitfield, was a setback and it took a while for Liam McIntyre to fill his sandals. But what really hobbled the drama was the ham-handed Hollywood feminism. Is it really women’s highest aspiration to be second-rate men? There were fight scenes here that pitted 5-foot nothing girls with swords against muscled male monsters — and we were expected to believe the girls might win. It’s just dopey and it ruined some of the episodes for me — especially on a show that has some fantastic female plot lines involving real, strong women doing real, strong but womanly things.

Nonetheless, if you could ignore that nonsense, by the final episodes, Spartacus had got its footing back. What distinguishes the show is that, at its best, it manages to resolve genuine emotional issues through sword fights and sex acts. It’s like a comic book with sub-text. When it’s good, I confess, it reduces me to my 12-year-old self and I stare at the screen in a kind of rapture thinking, “Cool. Girls.  Swords.  Girls…” 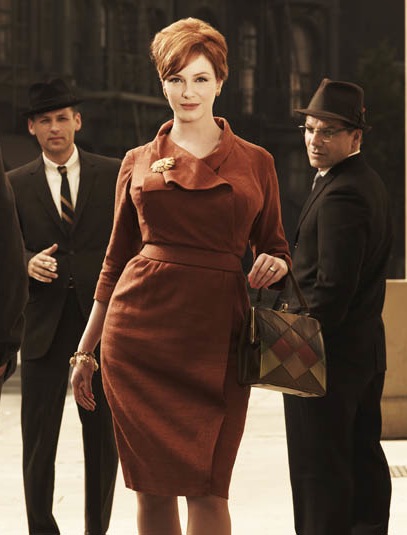 Mad Men. For me, the true arc of the story ended with the assassination of JFK. Don Draper represented the decay of fifties America: a fraud living out a lie of marriage and heroism while peddling a fictitious American dream. The fall of the Draper marriage and the death of Camelot was what the show was about. We’re only a few episodes into this season, but so far the plots seem to revolve around things that might have happened but didn’t. And there’s some race stuff and Viet Nam stuff, which feels forced and unrealistic. All the same, great acting, highly intelligent writing, and amazing sets and costumes make this kind of impossible to stop watching. Not sure how long that’ll be true, but so far, I keep tuning in.