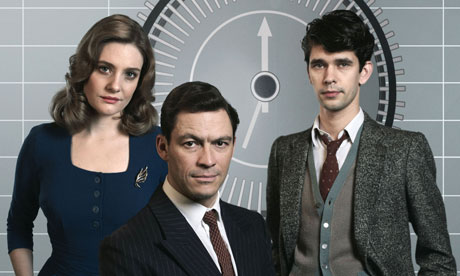 I wanted to love The Hour but somehow it never rose to the level of my expectations.  Part of the reason was the slogging, mindless left wing ideology but really that’s just a symptom of an overall lack of depth.

Still, there’s a lot of good stuff.  Wonderful acting, for one thing.  Dominic West, the lead of the classic HBO cop series The Wire, delivers a pitch perfect rendering of a complex anchorman, at once unprincipled and attractive. Ben Whishaw, who played the poet John Keats in the soporific Bright Star, proves himself an actual bright star here. And Romola Garai, who was wildly sexy in Amazing Grace, is wildly sexy here in some tight-fitting 1950’s clothes I’m not convinced anyone in the 1950’s ever actually wore. But be that as it may.

The story concerns an innovative BBC news show caught up in the Suez crisis. Unfortunately, its history is lopsided to the point of dishonesty and the underlying  muddle-headed left wingery is so conformist and poorly thought out that it doesn’t even rise to the level of annoying. It’s just stupid and is a genuine drag on the story. Good Lord, if nothing else, the notion that there’s a Soviet spy in the BBC is ridiculous:  how would anyone be able to tell him apart from everyone else at the BBC? And indeed, the story’s moral conclusion could be rendered something like: Why be something as dreadful as a Soviet spy, dear chap, when you can unleash socialist destruction on your country by working for Auntie instead.

The show is best when it focuses on relationships, especially the friendship between Garai’s proto-feminist and Whishaw’s insecure crusader—an honest affection which never quite blossoms into passion. But there’s no depth to the depiction of the various classes and much of the moral posturing is the sort of highfalutin nonsense you expect to hear from a college sophomore. Brit artists, even more than ours, are as incapable of freeing themselves from the lockstep conformity of left wing fundamentalism as a primitive priest would be of freeing himself from his savage religion. Must be why they call it progressivism.

All in all, The Hour is shallow but amusing and attractive with some very nice hats. I caught it on BBC America, but I notice it’s now out on DVD’s and available at Netflix. I hear it’s coming back for a second season, which is odd because the story wraps up very neatly and completely—and enough is enough.