Inflation came in a smidge under expectations in July and — this time, for sure, they mean it — Presidentish Joe Biden’s economy has bottomed out and prosperity is just around the corner.

To hear CNN and other state organs tell the story, that is.

Talk about out of touch! pic.twitter.com/Z8cyOAZyh1

Markets are up on the news, probably because traders expect the Fed to use any handy excuse to stop the interest rate hikes.

Just like the glorious economic news, it’s so hard to remember what we’re supposed to believe.

Snark aside, 8.5% is better than last month’s 9.1% annual rate. But it still compounds on top of the “unexpected” and “transitory” and “high class” 5.4% from this time last year.

As I posted on Twitter last month, inflation will eventually abate: 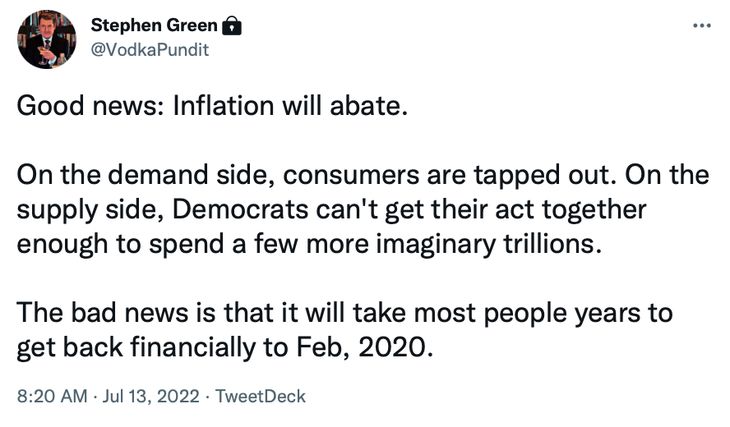 And that’s where the good news ends, such as it is.

Falling gas and food prices aren’t much to celebrate, I’m sorry to say. The food price reprieve is likely only temporary. The effects of various droughts and fertilizer shortages have yet to make themselves fully felt. And beef prices are down because of a big cull. The next herds will be necessary smaller, and prices correspondingly higher.

As for gas prices, $4 is still nearly twice what we were paying when Biden was sworn in last year. Until and unless his administration ends its war on domestic energy production, $2.20 gas will remain in the rearview mirror.

The real measure of the economy under Biden’s tax-and-spend and borrow-and-regulate regime is take-home pay.

ZeroHedge has the nasty-looking chart: 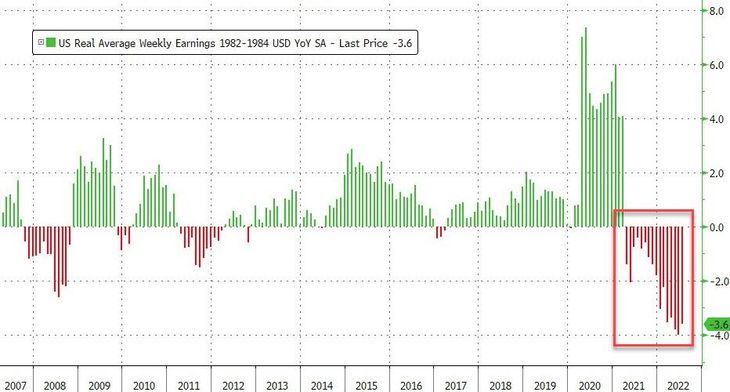 They also note that inflation-adjusted weekly pay is “down for a record 16th consecutive month.”

Biden has only been in office for 18 months. Since Biden signed his American Rescue Act [insert bitter laugh here] into law in March of 2021, Americans have indeed been rescued — from prosperity.

We can quibble over whether or not we’re already in a recession or merely heading for one, but high inflation, low growth (if that), and mounting debt indisputably indicate stagflation.

We spent and regulated our way into this mess, and Biden still believes that if we just spend and regulate a lot more, that will get us out of it.

Biden’s First Rule of Holes: When you’re in one, buy yourself a bigger shovel with other people’s money.

UPDATE: The news is even more glorious than first reported, comrades!

The actual annual inflation rate for July was…

NOW – Biden: "Today we received news that our economy had zero percent inflation in the month of July. Zero percent." pic.twitter.com/HXpRy5xmW5

He read these words out loud. From a script.

That room is so gaslit that we’re one Zippo away from a succession crisis.

Steve launched VodkaPundit on a well-planned whim in 2002, and has been with PJ Media since its launch in 2005. He served as one of the hosts of PJTV, a pioneer in internet broadcasting. He also cohosts "Right Angle" with Bill Whittle and Scott Ott at BillWhittle.com. He lives with his wife and sons in the wooded hills of Monument, Colorado, where he enjoys the occasional adult beverage.
Read more by Stephen Green
Tags: INFLATION SPENDING