Insanity Wrap needs to know: Ever heard the old story where the SecState asks his new ambassador to point on the globe which country they’ll represent at their new post, and when they point to Germany or wherever, the SecState corrects them by pointing to the U.S.?

Answer: Neither has Nick Burns.

President Biden’s presumptive Ambassador to China – Nick Burns – is a former adviser to a consulting firm employing Chinese Communist Party officials, a board member of a Harvard University program collaborating with China’s military, and a contributor to Chinese state-run media outlets.

Burns served as a Senior Counselor at the Cohen Group, a consulting firm founded by Bill Clinton-era Defense Secretary Bill Cohen. The Cohen Group works closely with former Chinese Communist Party officials [and] many consultants are active in various D.C.-based China lobbying groups. What’s more, the group has participated in an advisory program working with an entity sanctioned by President Trump for human rights abuses against Uyghurs in Xinjiang.

Insanity Wrap must ask Burns: Is it the Beijing bucks you like the most or is this a strictly ideological affinity?

Insanity Wrap must ask you, gentle reader: Which would be worse?

"The liberation of all oppressed peoples necessitates the destruction of the political-economic systems of capitalism and imperialism as well as patriarchy." pic.twitter.com/3XcMj3YWfO

Insanity Wrap hasn’t had time to look this up, but we’re reasonably certain that BLM stands for Being Livid Marxists.

Facebook Has a Private Army: Its Founders Want to Free Criminals

Insanity Wrap is today’s craziest person in the world.

We saw this story and it broke our brain.

Not because of the hypocrisy, mind you. That we can deal with just fine, as we have been doing for very nearly 20 years of blogging, and before that, a decade of writing about politics both professionally and for our own amusement.

It’s this part that broke us:

Zuckerberg has a team of 70 armed guards led by one of Biden’s former Secret Service agents. When he goes anywhere, his security team shows up beforehand to check it out before letting him go inside. Undercover armed guards disguised to look like Facebook workers even surround him to keep him safe from a possible attack by his own employees at the office.

Facebook has 1,000 security officers in the Bay Area alone. The San Francisco Police Department has less than 2,000 police officers. Facebook’s force is half the size of the SFPD.

Emphasis added, like a burly Pinkerton who doesn’t like the way you glanced at Zuck when you passed by on the sidewalk.

There’s some excellent reporting with plenty of details by Daniel Greenfield, and Insanity Wrap highly recommends that you read the whole thing.

While Insanity Wrap would prefer we had far fewer laws for the police to try and enforce, the establishment of professional police forces did bring about at least one welcome change.

No officer or department is perfect — far from it. But anyone with the ability to dial 911 in an emergency can get the police.

Before that, law enforcement was far more hit or miss, with the rich generally having private protection while everyone else went without.

The American Left would bring back those bad old days.

This is what they call “progress.”

they are beating the sh*t out of frail and elderly men. pic.twitter.com/q8gyg42lHo

Remember just a moment ago when Insanity Wrap reminded you that no police officer or department is perfect.

Also, remember that the police can only be as good as the laws they’re required to enforce. The War on Drugs basically forced police to shred the Bill of Rights, and now in this Time of COVID, some can’t even leave their homes without a potential beating.

And from the Twitter replies: “Sometimes Grandpa has a hard time understanding that he must die alone in isolation for his own protection.”

118 years is not a huge amount of time in human history.

The only reason it might seem so long to modern eyes is that the rate of progress, of change, has accelerated so much in the last two centuries or so.

Life in America at our Founding would have been more or less recognizable to a time traveler from 250 years before, but life from then to now has changed so completely that everything we have would look like magic to our forebears.

It only took 118 years to take us from the first powered and controlled flight of a fixed-wing aircraft (for a distance of all of 120 feet) to the first flight of a remote-controlled rotary-winged aircraft on another planet millions of miles away.

It takes a whole lot of sanity to get that done — and some crazy dreaming, too.

Ryan Long Is a National Treasure

They wish they could quit him. 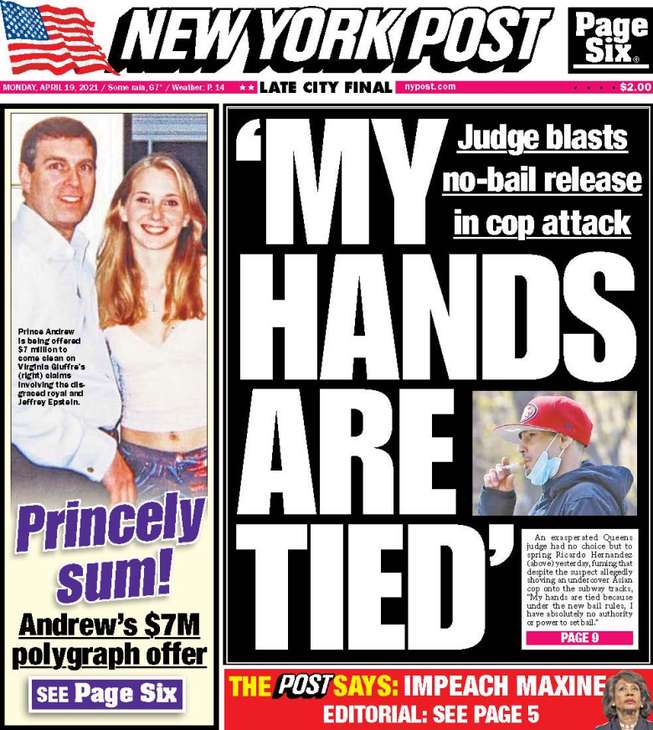 New Yorkers, getting what they voted for good and hard:

Suspect Ricardo Hernandez, 32 — who faces three hate-crime charges in the attack on the unnamed cop on a Long Island City train platform around 5:30 p.m. Saturday — has at least 12 prior arrests under his belt.

At Hernandez’s arraignment over the attempted push onto the tracks, Queens Supreme Court Justice Louis Nock said the state’s bail-reform measures barred him from holding Hernandez in jail.

“My hands are tied because under the new bail rules, I have absolutely no authority or power to set bail on this defendant for this alleged offense,” the judge said.

Insanity Wrap finds it difficult to care about the destruction of our great cities when that is exactly what voters in those places seem to want.

Regrets? They’ve had a few.

But then again, too many to make sense.

Previously On Insanity Wrap: While Biden Bumbled, Putin Went on War Footing on Land and Sea

Steve launched VodkaPundit on a well-planned whim in 2002, and has been with PJ Media since its launch in 2005. He served as one of the hosts of PJTV, a pioneer in internet broadcasting. He also cohosts "Right Angle" with Bill Whittle and Scott Ott at BillWhittle.com. He lives with his wife and sons in the wooded hills of Monument, Colorado, where he enjoys the occasional adult beverage.
Read more by Stephen Green
Tags: CHINA BLM INSANITY WRAP