Insanity Wrap #33: Biden Will Move the Country 'Foerwad' (?), Plus Your Duty to Get Robbed

Insanity Wrap needs to know: If video killed the radio star, then who killed the sitcom star?

Answer: Progressive politics did, and it was premeditated.

• It’s your bourgeois duty to get robbed, says a man with much more money than you have

• Biden got trumped in his home state

#Portland starting early in neighborhoods, flying into fits of rage over white men on their porches and the US flag – "Fuck your flag" pic.twitter.com/w3BLUgACmG

Just getting warmed up here by insulting the flag. But as one Twitterer noted, “The guy’s probably a combat vet who fought shoulder-to-shoulder with men of all colors, but okay.”

Once the partly violent rioters got into it, Portland was subject to the usual litany of harassment, abuse, arson, and violence.

Law enforcement — whether local, state, or federal — have tried everything except what works.

Crazy how the results are always the same, isn’t it? 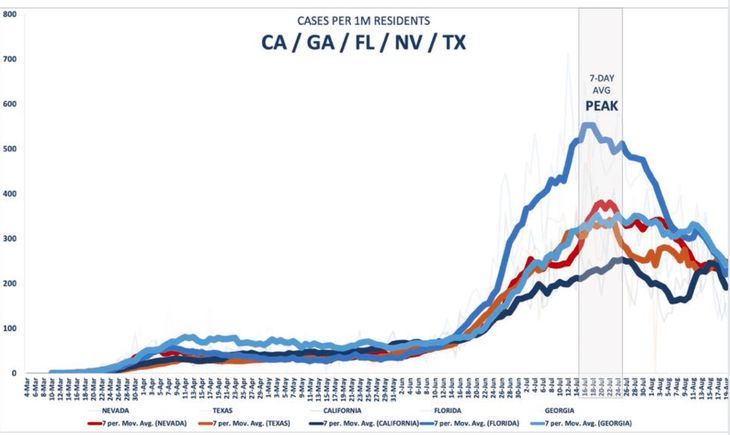 This comes from our friend Bruce Carroll on Facebook where he noted:

WOW. This is very interesting.

And yet, the 7-day avg of cases per million peaked at almost exactly the same time. They also all started noticeably moving up on June 14 — two weeks after the mass protests began.

How is that possible if lockdowns and masks are so important?’

Insanity Wrap would remind you that what we have is a highly successful virus.

Ebola isn’t much of a global threat because it’s so awful. That is to say, hemorrhagic fevers are so terribly deadly that they burn out before they spread very far.

A successful virus spreads more than it kills, which makes Ebola something of a failure.

That’s not much comfort to some poor victim bleeding out through his eyes, but it is the cold, hard logic of the disease.

In other words, a whole lot of people are going to get this thing, and no amount of hunkering down is going to stop that. Even so, it’s going to kill relatively few, as we’ve seen by the exploding infection rate and the declining death rate.

Instead of hunkering down, Insanity Wrap believes we need to do just three things: Protect the vulnerable, quarantine and care for the sick, and have the healthy take sensible precautions.

This is a nasty, virulent, successful bug, but the only way it’s going to burn out is to let it burn itself out.

It’s long been known that while Biden leads in the polls, he suffers from a double-digit enthusiasm gap compared to the Trump supporters who would crawl naked over broken glass to vote for him.

What did you hear in Biden’s speech last night that you think might have closed the gap even a smidge?

Insanity Wrap will be here all day sorting through the replies.

(Actually, we’ll be at lunch hoping a reply might show up before the appetizer.)

Coming Soon to a City Near You

Insanity Wrap can’t wait to see this movie, but we aren’t looking forward to seeing this movie, if you know what we mean.

Previously On Insanity Wrap: The Only Swedish Model We’ll Ever Date, Plus Meet Mr. Jill Biden

If you’re being robbed by an organized band of armed thugs, it’s probably your fault for not sharing the wealth voluntarily.

Andrew Sampson’s thread was a riff off of San Francisco resident Daniel Singer’s complaint that his home or car had been broken into yet again.

Broken into again. Professional operation. Why do we allow this to be the status quo.

He even pleaded to SF District Attorney Chesa Boudin to “please actually prosecute these people this time. These crimes matter. More so than going after DoorDash and Postmates.”

But Boudin is an uncloseted socialist who will be doing no such thing — not prosecuting these crimes was a part of his election platform.

So you might think, with all this progressive governance going on, that someone like Andrew Sampson would be pleased. 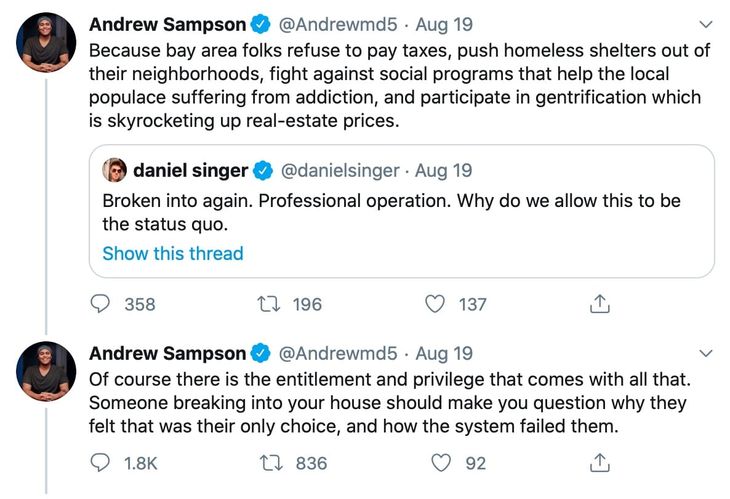 The problem with theft in San Francisco, if you can wrap your skull around this, is that the city isn’t progressive enough.

Later, Sampson tried pulling a neat little sleight of hand by equating leaving stuff he no longer wants out on the lawn for others to take, with people having their homes violently broken into and their possessions stolen.

Insanity Wrap is comfortable concluding that Andrew Sampson is both a morally repugnant individual and perfectly representative of proper Bay Area thinking.

We know. Insanity Wrap lived there — and couldn’t wait to get out — as you’re about to see.

Are people desperate to get out of certain cities? Read @ETFelten's clever way of checking. Renting a U-Haul truck from Brooklyn to Chapel Hill NC costs $2603. Chapel Hill to Brooklyn, $492. How about Portland OR to Boise? $1242. Boise to Portland, $91. https://t.co/Kj6HOoxVeL

Insanity Wrap first played this game in 1994, when we moved from San Francisco to Colorado Springs. The 16-foot Penske van cost us a then mind-blowing $1,100 or so for the privilege. Out of curiosity, we asked the booking agent what the return trip would cost, and it was a little under $300.

In other words, Penske had to make it about four times more expensive to get the hell out of the San Francisco Bay Area than they did to get out of Colorado, just to make sure all their vans wouldn’t stack up in Colorado.

And this was before the S.F. sidewalks were covered with feces and dirty hypodermic needles.

Still, even then Insanity Wrap could see the writing on the wall and we were desperate enough to get out of San Francisco that we didn’t mind paying the money.

We Had Thought This Was a Photoshop, But No

Being a serial committer of typos our own selves, Insanity Wrap feels nothing but empathy for whichever ABC News employee is guilty of such an obvious and widely-seen typo.

Still, there’s a world of difference between a solo blogger providing hot takes on the fly, and one of the world’s major news organizations enjoying days or even weeks of prep time before an event like the DNC.

The first rule of comedy is that it has to be funny.

Sometimes there is comedy to be found in making people feel awful and awkward, like Ricky Gervais has done to such great effect since at least the first season of the original BBC version of The Office.

Last night’s performance by Julia Louis-Dreyfus — who is a comic genius, given the right material — was not that.

Progressive politics and comedy don’t mix, and if you needed any more proof than last night — when even Julia-Louis-Dreyfus could elicit nothing but cringes — then we don’t know what else to show you.

Previously On Insanity Wrap: Liz Warren Spells Out the Marxism for You, Plus Billy Joel as Nostradamus