Insanity Wrap needs to know: When is not-racist humor racist?

We already know the answer: When it suits the progressive agenda for it to be racist.

On Thursday the New York Post reported that three Red Bull execs were fired over a “racist” marketing map following weeks of complaints from a bunch of snowflakes the company must have hired by mistake.

Insanity Wrap now presents to you the “racist” map in question: 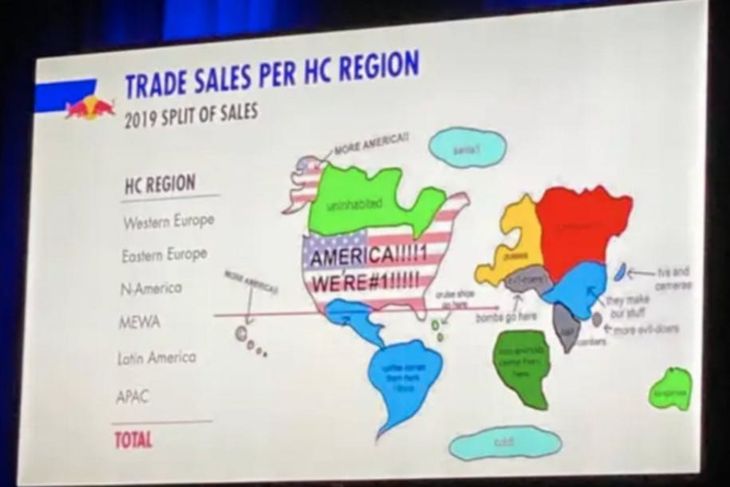 The image isn’t great, but you’ve probably seen a million versions of the “racist” Red Bull map before.

The map is supposed to be that of an “ignorant American consumer’s” view of the world, and it’s true that most Americans suffer geographic ignorance to one degree or another.

“America!!! We’re #1!!!” is emblazoned across the United States, while an arrow pointing to the Caribbean says “cruise ships go here.” Canada to the north is labeled “Uninhabited.” Mexico and South America are marked “coffee comes from here I think.”

Australia was labeled “kangaroos” and Antarctica was “cold.” An oblong landmass that could be Greenland or the Arctic Circle is labeled “Santa!”

Not the funniest version of the old mislabeled world map gag anyone has ever put together, but for a marketing meeting slide, Insanity Wrap thinks it’s practically comedy genius.

And it isn’t like Americans are the only people who suffer from geographical ignorance. 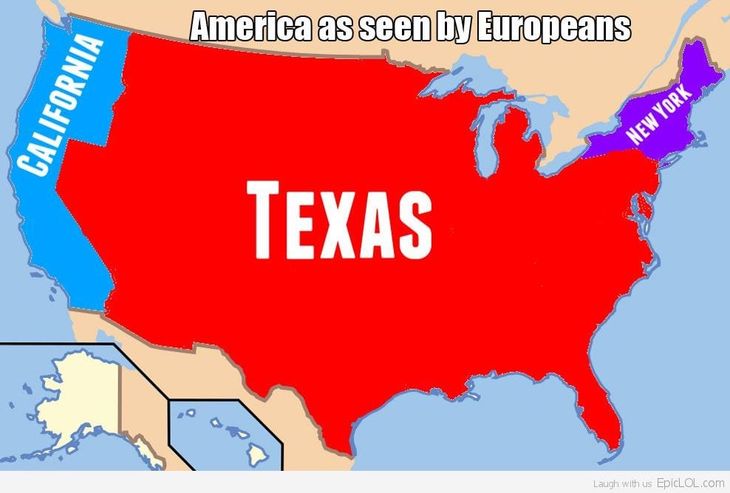 (Image courtesy of Runt of the Web and EpicLOL.)

New Yorkers, Californians, and cowboys… that sounds about right for your typical cheese-eating surrender monkey.

(See what we did there?)

Insanity Wrap just today found this particular classic of the genre, “Europe According to Luxembourg.”

Look at the blowup view of Luxembourg itself, and you’ll see it’s labeled “U$” (Luxembourg is famous for banking and business headquarters, you see), while its immediate neighbors are “employees and countryside.” 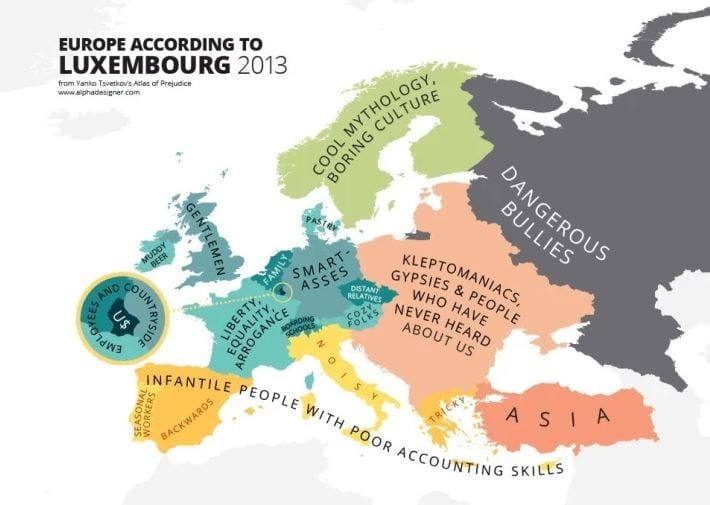 Being a bit of a history buff, Insanity Wrap got several hearty chortles out of “The World According to Ancient Greeks.” 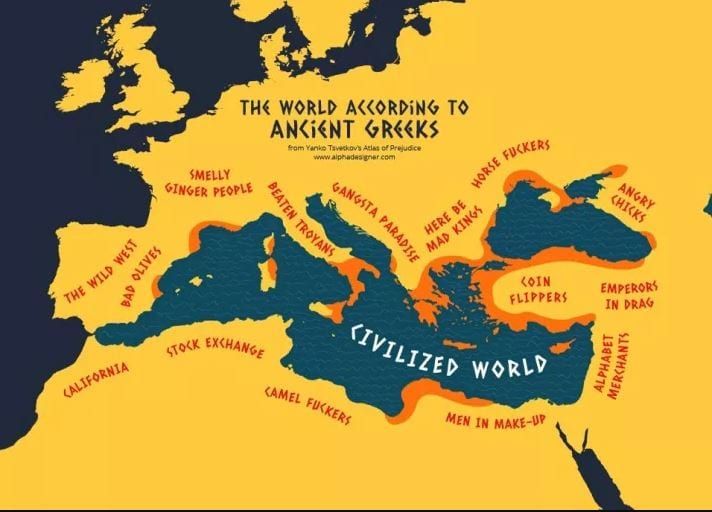 When you get to Macedonia and it’s called “Here Be Mad Kings,” that’s enough to send the entire history department of your local university to the floor, laughing.

In all of these maps except the ancient Greeks, who aren’t around anymore to be offended, it’s the mapmakers making fun of themselves.

There is no racism to be seen anywhere.

I mean, was it racist when the New Yorker virtually wiped out a couple hundred million Americans who didn’t happen to live in New York City or California? 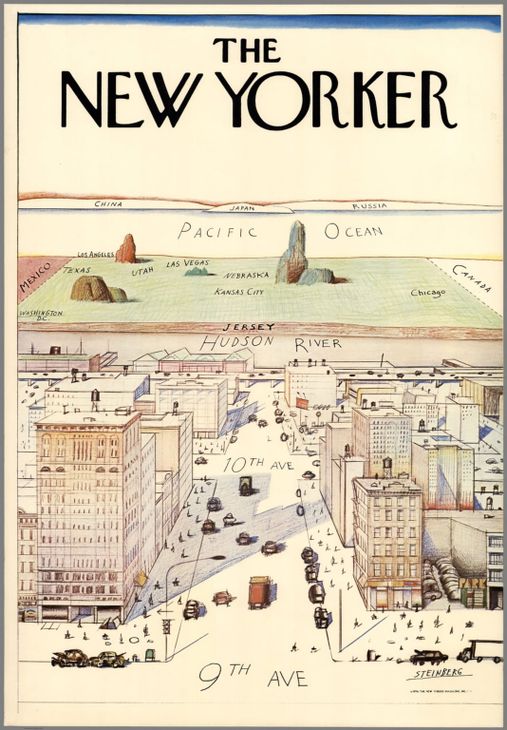 If we can’t laugh at each other, if we can’t even laugh at ourselves, then it’s all over for us as a species.

Which Insanity Wrap understands is exactly the point.

I don't support cancel culture, unless we're talking about men who still insist on wearing cargo shorts. Then we must hold 👏 them 👏 accountable 👏 pic.twitter.com/714E3hhYt1

Insanity Wrap needs to know: Are cargo shorts just a practical way to dress for the summer heat, or just another way in which grown men refuse to stop dressing like young boys?

Hash it out in the comments, because Insanity Wrap is going to sit this one out.

(Sit it out in our grownup long pants, that is.)

Anyone else getting tired of these stories? Too bad, because here’s another one:

An elementary school principal in Poudre School District could face disciplinary action after coming under fire for a Facebook post in which she wished President Donald Trump would die.

Irish Elementary Principal Lindsey Walton posted the comment in reference to a story on The Hill with the headline “South Dakota governor flew with Trump on Air Force One after being exposed to coronavirus: report.”

PSD confirmed Friday that the comment, which has since been removed, was posted by Walton.

Insanity Wrap doesn’t care much about the political views of schoolteachers, but publicly hoping for the death of others because of their political views is something to care about.

P.S. Social media makes people dumber, coarser, and more intolerant, but probably only if they started out dumb, coarse, and intolerant. Therefore, Insanity Wrap recommends lefties stay off of social media for their own good.

If you touch my girl or my family you better be prepared to face the consequences of some Monday Night Raw classic self-defence 💩#MondayNightRaw #WEE #airportfight pic.twitter.com/j30lUGpjZa

Not much in the way of context for how this fight — these fights? — got started, but there sure does seem to be a racial element.

Mostly we wanted to post one of the replies.

Lys tweeted, “I’m old enough to remember when you put your best clothes and your best behavior to fly. Looking at this video makes me despair for humanity!”

Insanity Wrap is old enough to remember those days, too, which right now has us feeling quite old indeed.

Multnomah county's incoming DA, Mike Schmidt, who will oversee prosecutions in Portland, is favored by the far-left & antifa. When asked about the recent riots, he says it takes "more than just peaceful protests to get the government's attention." https://t.co/KrP6mtG1dp pic.twitter.com/bhQDKz2949

Portland wants this, and by overwhelming margins:

On May 19, the 39-year-old Schmidt won 77% of the vote for Multnomah County district attorney. Schmidt, who previously directed the Oregon Criminal Justice Commission and worked as a prosecutor for the county, ran on a platform of eliminating the state’s cash bail system and appointing a hate-crime prosecutor. Even though he won handily over law-and-order candidate Ethan Knight, discussions of abolishing police departments were mostly relegated to activist groups in Portland.

Yeah, but now the activist groups are in charge.

It looks like the people of Portland know what they want and have decided they deserve to get it, good and hard.

Wave bye-bye to the last semblance of law and liberty. 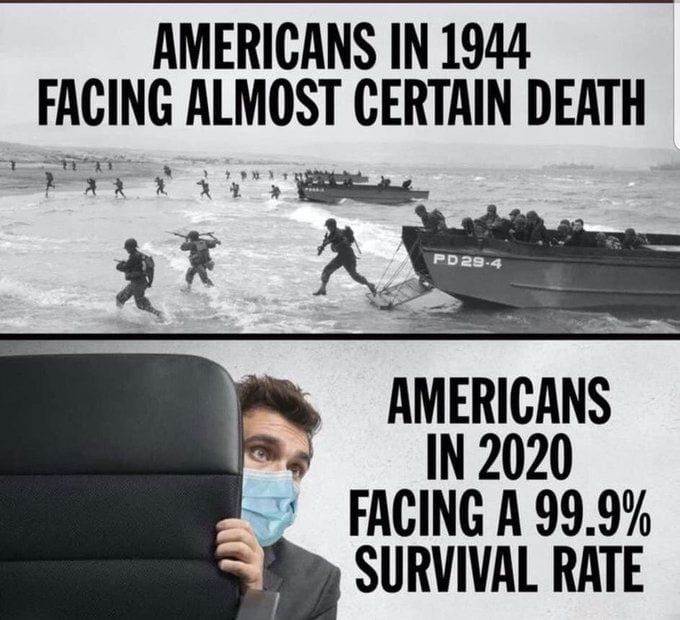