“Build the wall!” enthusiasts might not have had a virtual border wall in mind, but that’s exactly what the Trump administration will put up in remote parts of our desert Southwest.

CBP’s announcement of the construction program explains how ASTs will work:

Perfectly suited for remote and rural locations, the AST scans the environment with radar to detect movement, orients a camera to the location of the movement detected by the radar, and analyzes the imagery using algorithms to autonomously identify items of interest, such as people or vehicles. Border Patrol agents are then alerted to this event and have the opportunity to make the final determination on what the item is and if it poses a threat.

The towers will “operate off-grid with 100 percent renewable energy and provide autonomous surveillance operations 24 hours per day, 365 days per year,” according to CBP.

At the core of all our products is Lattice, an AI software backbone that uses sensor fusion, machine learning, and mesh networking to integrate real-time data from Anduril hardware and third-party systems into a single, autonomous operating picture.

If the company’s claims are accurate, what ASTs will do is very much like the “sensor fusion” hardware/software package that makes the fifth-generation strike fighter so deadly.

The pilot program for a virtual border wall launched in 2018 with four ASTs in the San Diego Border Patrol Sector, and since then a total of 60 ASTs have been added to the border in the region. Today’s plan calls for another 140 for a total of 200 ASTs.

CBP claims the ASTs will act as a “force multiplier” for the agency by “enabling Border Patrol agents to remain focused on their interdiction mission rather than operating surveillance systems.”

The idea of a virtual wall has bipartisan support since President Donald Trump first floated the idea in January of 2019. Trump said at the time, “The walls we are building are not medieval walls. They are smart walls designed to meet the needs of frontline border agents,” and House Democrats pledged to spend up to $5.7 billion on the effort. 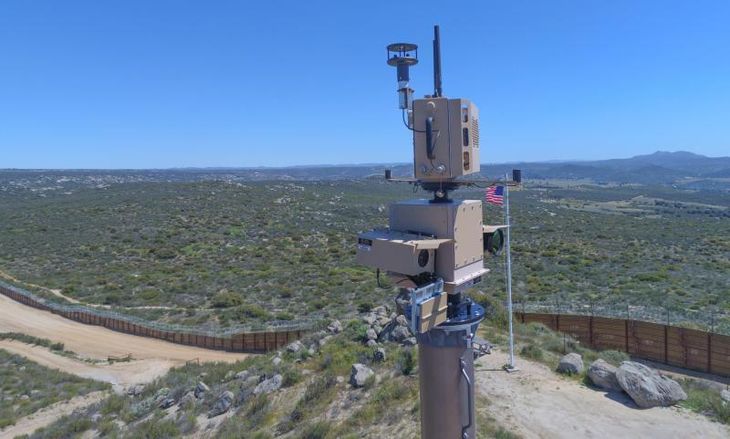 California Democratic Congressman Pete Aguilar, known for working across the aisle on some issues, said, “We cannot focus on archaic solutions in order to address this very modern problem.”

Skeptics might say that Democrats are behind the program because it’s easier to switch off a virtual border wall than it is to tear down a physical barrier, and some might say I’m a skeptic.

Whatever the politics are behind the AST program, the fact is that automation and remote sensing truly do act as force multipliers, which is why the U.S. military has invested so heavily in both, going back decades.

Meanwhile, construction of the physical border wall continues in other areas.

Last week, Trump visited Arizona and reiterated his promise to build 450 miles of new wall along the 1,954-mile U.S.-Mexico border by year’s end. Since the pandemic started, his administration has accelerated wall construction and increased spending from $11.1 billion to $15 billion.

The amusing part? The Times had the gall to headline the story like so: “Trump accelerates border wall construction ahead of election, despite pandemic.”

Despite? Are they unaware of how the Wuhan virus is spread?

Border control is exactly what we need more of during a pandemic — or better yet before one gets started.

These new autonomous surveillance towers might be a valuable contribution to just that.

Two Americas: Risk-Tolerant vs. Zero-Risk—Will One Ruin the Other?