Just one day after a Jewish NYC lawmaker promised to “cut off the chains” to reopen the city’s playgrounds, three members of an informal #RESIST group did just that.

Then on Monday, the Daily News reported that “members of the Orthodox Jewish community used bolt cutters to ‘liberate’ a Brooklyn playground the city welded shut.”

The gate had been welded shut by city workers after 25 previous #RESISTANCE acts of cutting chains that had closed the playground to NYC kids, predominantly Jewish.

ASIDE: I’ve liberated the #RESIST tag from the Left because this is what real resistance to genuinely arbitrary authority looks like.

De Blasio had resisted reopening playgrounds on so-called “public safety” concerns about COVID-19, while at the same time allowing — and even encouraging — demonstrations like this one: 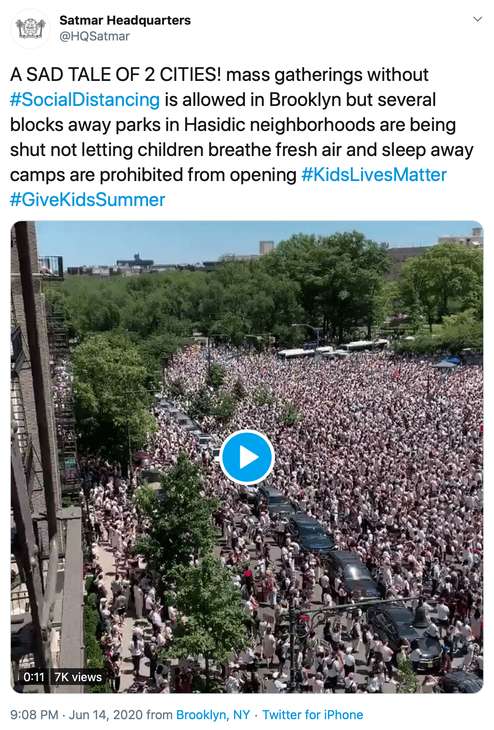 A City Parks spokesweasel warned on Monday night, “Playgrounds across the City are closed for the safety of our children,” but that isn’t exactly true.

The Daily Wire reported that Felder accused de Blasio of “‘catering’ to donors and supporters by allowing playgrounds to remain open in some city districts, while chaining and welding gates shut in others.”

Playgrounds + school yards are essential to children. They need a place to play that’s safe.

I was glad to stand with @NYSenatorFelder and @KalmanYeger at Kolbert Park in Midwood demanding playgrounds be opened now. pic.twitter.com/nmZIh9Jf3I

Back in May, de Blasio issued a Cease and Desist order closing down the city’s Jewish day schools, an official act more difficult to #RESIST with a simple set of bolt cutters. Again, de Blasio cited public health concerns, even though the CDC’s own report doesn’t support shutting down schools.

Earlier today the NYPD shut down a Yeshiva conducting classes with as many as 70 children. I can’t stress how dangerous this is for our young people. We’re issuing a Cease and Desist Order and will make sure we keep our communities and our kids safe.

As I reported to you at the time:

De Blasio talks about keeping “kids safe,” despite acknowledging himself on a recent news appearance that the Wuhan virus is a threat mostly to people in their 70s and 80s. Here’s the clip, along with some Twitter reaction.

He himself said this: pic.twitter.com/S7h5RQHOCe

And that came just three weeks after de Blasio had ordered police to arrest Jewish mourners at the funeral of a beloved NYC Rabbi, Chaim Mertz.

De Blasio said then, “I went there myself to ensure the crowd was dispersed. And what I saw WILL NOT be tolerated so long as we are fighting the Coronavirus.”

Unlike, say, an anti-police protest, the Orthodox mourners were seen wearing masks and whenever possible following social-distancing guidelines.

The NYC-based Algemeiner reports that the “lawsuit accuses the three top officials of an apparent double standard as it pertains to allowing protesters to exercise their First Amendment [rights] over the death of George Floyd.”

With plenty of evidence to back it up, the suit also claims that “Favored businesses, entities and activities, as well as favored mass demonstrations such as those over the death of George Floyd, are totally exempt from the challenged gathering limits.”

Howard Slugh, who founded and serves as general counsel for the Jewish Coalition for Religious Liberty, said:

The Free Exercise Clause, at a minimum, means that religious adherents cannot be treated worse than their neighbors unless the government has a compelling need to do so… New York may face a difficult burden in proving that it can meet that standard.

NYC’s Orthodox Jews tend to be some of the city’s most conservative voters and have acted as perhaps the strongest #RESIST movement against NYC’s arbitrary and capricious enforcement of COVID-19 restrictions.