John Hickenlooper, the Democratic Senate candidate, will be forced by a “team” from the attorney general’s office to appear before the state’s Independent Ethics Commission after refusing their subpoena.

It’s not yet known just what this “team” is or exactly how they’ll compel the former governor’s testimony. Although whoever they are, some Republicans and even Democrats hope they’ll use pliers or maybe waterboarding.

Hickenlooper had been subpoenaed to appear on Thursday morning for a hearing looking into charges that he accepted illegal travel-related gifts to various events throughout 2018. Previously, he’d been accused of improperly using federal funds for his personal political benefit.

Prior to his virtual arrest, Hickenlooper had tried to delay the hearing — a move blocked by a Denver District Court judge on Wednesday night. Independent Ethics Commission chief Debra Johnson has reportedly said that she is willing to find Hickenlooper in contempt for defying the subpoena. 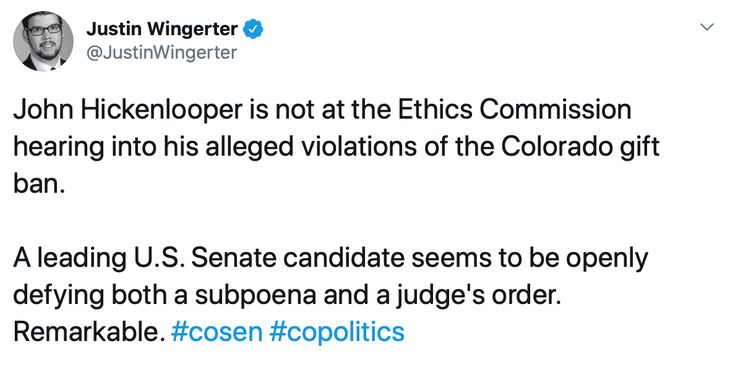 Hickenlooper has always proclaimed his innocence, but I’m not sure how he could be acting any guiltier. Currently, “Hick” is a contender for the Democrats’ 2020 Senate race against Republican incumbent Cory Gardner.

The onetime presidential hopeful is not exactly popular with some of his fellow Democrat officer-seekers. After having promised not to run for the Senate this year, Hickenlooper’s candidacy forced out several contenders who couldn’t hope to compete with his war chest or name recognition.

It’s usually the Colorado Republicans engaged in a circular firing squad, but Hickenlooper’s erratic decisions have generated more than a little bad blood on the D side of things for a change.

As for the IEC, it is a “constitutionally created independent commission” that is “charged with the implementation of Article XXIX of the Colorado Constitution” concerning ethics in government. It is charged with giving “advice and guidance on ethics issues” and to “assess penalties and sanctions where appropriate.” It is not a criminal or civil court.

The hearing had originally been scheduled for March but had been delayed until today due to the coronavirus pandemic. Today’s investigation was supposed to be conducted virtually via video chat, which Hickenlooper had been assured would result in “a fair hearing.” He had also tried to substitute written comments for live testimony, a request also denied by the bipartisan commission.

CPR News describes the issue behind the hearing:

The ethics complaint focuses on whether or not airplane flights taken by Hickenlooper during his governorship were illegal gifts. Hickenlooper’s team has argued that the travel was a mix of personal and business, that it was allowed under various state rules, and that none of the providers attempted to unduly influence him. Hickenlooper’s team believes that a national conservative political group, America Rising Corp., engineered the complaint.

Travel included a trip to Turin, Italy, for the Bilderberg Meeting, another trip to Connecticut for the commissioning of the USS Colorado, a private trip to New Jersey (yes, New Jersey), a wedding in Texas, and a work + pleasure trip to Jackson Hole, Wyoming, for an American Enterprise Institute symposium.

A little-noticed government account that is paying ongoing legal bills related to an ethics complaint against U.S. Senate candidate John Hickenlooper is facing renewed scrutiny even as the Democrat’s allies continue to block requests for an audit of the spending.

In its final months, the former governor’s administration used federal funds from a 2003 account to cover a prominent Democratic attorney $525-an-hour fee and spent $13,385 for a legacy website designed to tell the story of how the governor and his team “paved the way for Colorado’s journey and growth.”

Some of those federal funds came from the Jobs and Growth Tax Relief Reconciliation Act, which was meant to aid state governments — not elected officeholders — following the recession caused by the 9/11/2001 terror attacks.

More to come, I’m sure, so stay tuned.

UPDATE: This is classic. Kudos to whoever put this together.