My close dear personal lady friend Miss Christina Hendricks called me late Saturday night. “Steve,” she whispered to me in her best Marilyn, “what have you done for Soldiers’ Angels and their efforts to send 150,000-plus Christmas packages to our troops deployed overseas?” 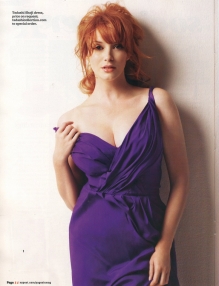 “No, silly — what have you done?” my darling Miss Christina Hendricks asked.

“I’ve put up some really nice pictures of you, too,” I protested. “To try and bribe others into donating some money.”

“Stephen. My dear. What have you done for Soldiers’ Angels. Do something for them, for me, and I’ll let you call me back later tonight. After I’ve changed into something a little less…”

As she started to hang up the phone, I could hear the faint silk rustle of a bra clasp being unhooked.

So I clicked over to Soldiers’ Angels and put fifty bucks in the kitty. It was the least I could do, after everything Miss Christina Hendricks had done for me. If you can’t spare fifty, then twenty bucks will still get Christmas packages to two soldiers overseas.

And it would make Miss Christina Hendricks very appreciative. Trust me on this.