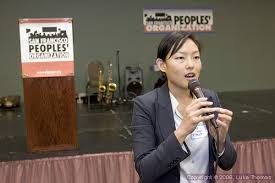 San Francisco supervisor Jane Kim refuses to say the Pledge of Allegiance.   Actions endearing to her San Fran constituents are  just the sort of thing that would result in an immediate election defeat most everywhere else in the nation.  Kim, pulling a page from the grievance playbook, says, “I don’t think our flag represents a nation where there’s liberty and justice for all.”  Fox further notes: “she hasn’t recited the pledge since high school and stayed silent during her previous tenure as the Board of Education president.”  A true believer it seems.