That Thomas Friedman would spout stupidity and anti-Semitism surprises me no more than the appearance of a gumball after I put a quarter into the machine and turn the knob. But one line in the New York Times‘ calumnist’s (sic) Dec. 13 tantrum against Israel was worth a double-take:

I sure hope that Israel’s prime minister, Benjamin Netanyahu, understands that the standing ovation he got in Congress this year was not for his politics. That ovation was bought and paid for by the Israel lobby. The real test is what would happen if Bibi tried to speak at, let’s say, the University of Wisconsin. My guess is that many students would boycott him and many Jewish students would stay away, not because they are hostile but because they are confused.

Why on earth is the “real test” at the University of Wisconsin? For liberals, the only people who count are the smart people, because it is an article of faith that  social engineering can fix all the world’s problems, and a logical conclusion that only smart people qualify as social engineers. It doesn’t matter what the dumb people think. They are the ones who need to be socially engineered. To Friedman, it is irrelevant whether Americans at large support Israel by a 4:1 margin or better, and that support for Israel is growing steadily, as the Gallup Poll consistently shows:

That poll includes dumb people, so it doesn’t count. To Friedman, what matters is what university audiences might think. The insularity of the liberal mind is astonishing. It brings to mind the anecdote about Emperor Ferdinand of Austria (deposed for incompetence in 1848). He went hunting and shot and eagle. The bird fell to his feet, and Ferdinand said, “It’s got to be an eagle — but it’s only got one head!”

The American university system exists for the most part to produce the social engineers who will fix all the world’s problems. During the 1960s, those of us who had the misfortune to attend the better colleges were taught that our mission was to make the world perfect, through the Great Society, arms control, internationalism, disarmament, and so forth. When the Vietnam War and the urban riots of the 1960s showed that the liberalism of our elders had not fixed the world’s problems, we abominated them, and pursued even more radical versions of social engineering. The radicalization of the universities produced a generation of clever people unsuited to productive activity in the real world but skilled at bloviating, and they became the tenured faculty of today. And their salaries, privileges, and perks continued to grow to the point that $50,000 in annual tuition barely covers them. Overall CPI is up 70% since 1990, but tuition and fees have risen by 300%. 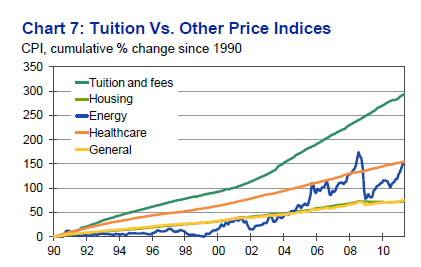 Meanwhile the hard-science faculties of major universities (as well as the better music conservatories) filled up with foreign graduate students, mainly Asians. As I noted in a recent post, MIT’s Chinese graduates now get higher starting salaries if they return home. The most disturbing report of all was a UCLA study showing that only 40% of students who initially chose a science/engineering/math major finished a degree within five years (for blacks and Latinos, the completion rate was closer to 15%). Americans simply won’t work hard enough.

Rather than produce smart people, the university system has dumbed America down. After two generations of academic wheel-spinning, the transformation of universities into Maoist re-education camps with beer kegs has ruined their practical value. The giant sucking sound you hear is the air going out of the higher education bubble. As the New York Times reported in a Nov. 23 feature, “One of the greatest changes is that a college degree is no longer the guarantor of a middle-class existence. Until the early 1970s, less than 11 percent of the adult population graduated from college, and most of them could get a decent job. Today nearly a third have college degrees, and a higher percentage of them graduated from non-elite schools. A bachelor’s degree on its own no longer conveys intelligence and capability.”

Student loans, with a default rate of 8.8%, are the new subprime debt.

The only good news here is that liberal mainstream culture can’t afford to brainwash as many American kids as it used to. Prof. Harvey Mansfield of Harvard University likes to say that the big question in American politics is whether the red states can produce kids faster than professors from the blue states can corrupt them. The lure of the elite universities was the promise that kids could have their cake and eat it, too, that is, save the planet and drive a Volvo. The dashed hopes of American students promote the sort of misbehavior we see in the Occupy Wall Street protests. They would do better to sue their universities for fraud and demand a return of their tuition, with interest. Somehow, I don’t expect quite the same level of mobilization for Obama in 2012 as we saw at the universities in 2008. The kids won’t have gas money, let alone cars.

The existential question for liberalism becomes: If you so smart, how come you ain’t rich? Who cares what an audience of soon-to-be-unemployed kids at the University of Wisconsin might think? With their heads stuffed with literary theory, gender studies, and environmental pseudo-science, they are barely qualified for the cubicle jobs they will obtain if they are lucky. There is some value to a B.A. of any kind; it teaches you to read, memorize, show up on time and repeat what you are told. College graduates, at least, can read the new job manual, which explains why their unemployment rate is much lower than the national average. But few of them will live well, and almost none up to their expectations.

Liberalism, like cancer, is a self-liquidating malady. Eventually it kills the patient. Secular Americans, mainline Protestants, loosely-affiliated Catholics, and Reform and Conservative Jews breed like Germans or Italians, with fewer than 1.5 children per female. By contrast, Hispanic Catholics have 3 children, and evangelicals 2.6 children. America is like Schroedinger’s Cat, in a superposed state of being dead and live. And long before demographics catch up with liberal culture and extinguish it, like the post-Alexandrine Greeks or the 5th-century Romans, the economic destruction wrought by liberal education will have impoverished most of a generation of American young people.