Artists Against Hatred: Confronting Genocide in the Middle East

Everywhere I turn — or so it seems — attacks on Israel and Israelis are in process. The other day, after a long day of writing, I idly, instinctively channel surfed — and there was the infamous Christiane Amanpour grilling Israeli Foreign Minister Ehud Barak. Oh, how this half-British, half-Iranian journalist relished this task. All her questions were hostile and were meant to embarrass or castigate both him personally and Israeli policies in general. CNN’s poor excuse for Oriana Fallaci never paused to take a breath; she gave Minister Barak absolutely no quarter. Except once. That’s when Amanpour told Barak that he was still saying the same things about peace that he’d said ten years ago when she’d interviewed him, at which moment, she flashed back to that very interview.

Minister Barak said that he’d aged since then, but she seems to have gotten younger.

Many hairdressers, makeup specialists, perhaps a plastic surgeon or two may account for this, but still Amanpour smiled with embarrassed pleasure. She was looking good, better than she usually does. The flak jacket was gone, her hair was not salad-tossed, she wore an elegant suit and expensive gold earrings.

I admit: I did not watch the entire interview. I could not bear to do so. I have seen too many Israelis grilled in just this way — and too many Palestinians flattered and fawned over by the same American journalists.

From March 1st to March 14th, the sixth annual Israeli Apartheid “Week” will take place in 57 cities around the world. I have suggested that we launch an Islamic Apartheid Month because Muslims are the world’s largest practitioners of both gender and religious apartheid. The scapegoating of tiny Israel is merely a way of diverting the world’s focus away from the actual apartheid practices that characterize Saudi Arabia, Bangladesh, Egypt, Somalia, Yemen, Sudan, Iran, Pakistan, Afghanistan, and Muslim-majority regions in Africa and Asia.

Israeli Apartheid Week is the continuation of Durban by another name and is meant to insure the continued isolation and demonization of the Jewish state. The race is on for world-wide sanctions, divestment, and boycott — not of Iran or Sudan, but of Israel. At the same time, Obama’s administration is refusing to sell arms to Israel and is simultaneously refusing to stop Iran from developing nuclear weapons. From 2004 on, I have been writing about another attempted genocide of the Jewish people. Now, that’s what Ahmadinejad specifically says.

So: The good news matters more than ever. And there is some. Various groups (Hasbara, Christians and Jews United, Bnai Brith of Canada, and Stand With Us, among others) are joining the students at York University in Toronto to counter the lies by telling the truth. They are sponsoring an Israel Defense Forces week to explain Israel’s right to defend herself. Honest Reporting also has campus-worthy online materials to use to counter the Big Lies of Israeli Apartheid Week. So does CAMERA.

In another kind of pro-active move, Artists 4 Israel (A4I), a group I’ve written about before, is planning a trip to Israel. Next month, ten internationally well-known street and graffiti artists will travel to Sderot, Kiryat Gat, Jerusalem, and Tel Aviv to Paint Israel. According to founder Craig Dershowitz (no relation to my dear friend Alan), Paint Israel was:

Originally conceived of as a program just for Sderot, A4I wanted to paint the bomb shelters of that war-ravished city. (Hamas has been shelling Sderot for eight years from Gaza). The hope was to return a sense of beauty and hope to a place in the midst of war. The idea then expanded to provide art therapy for children suffering from post-traumatic stress disorder from the constant barrage of rocket attacks. 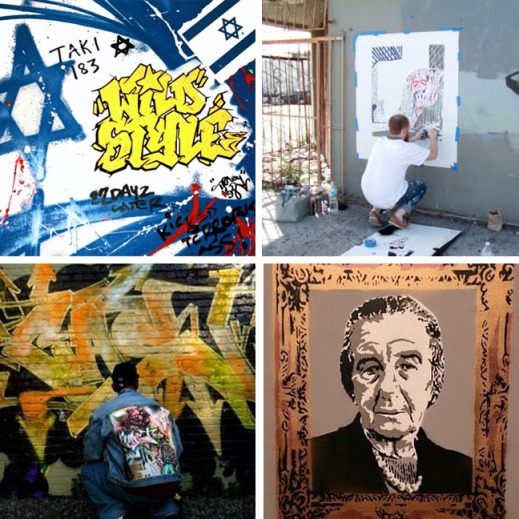 Here’s what these gallant “artist-ambassadors” will do. In Sderot, they will paint bomb shelters, Chabad’s rocket defense walls, the Jewish National Fund’s Indoor Recreational Center and Ateret Esther, the “only school not fully protected from rocket attacks.” In Kiryat Gat they will “transform bombed-out buildings into living art installations.” In Jerusalem they will design murals for “The Story of Hope, a haven for Jewish women trapped in abusive relationships with Arab partners.” But, they will also join Arab and Jewish youths in “painting for peace” at the Machshava Tova.

Guess what? None of the graffiti artists are Jewish. None have much knowledge about Israel. This trip will provide them with first hand knowledge of Israel’s “beauty and strengths” and will allow them to return to the United States and serve as “ambassadors on behalf of the country, telling their followers and fans all about their newfound appreciation for the nation.”

And guess what? Each artist is donating their time to this trip. A4I is raising money for their expenses.

On the one hand, jihadists are engaged in angry, ugly confrontations on American and Canadian campuses; they burn facsimiles of the Israeli flag; they jeer, boo, heckle, and physically menace speakers. On the other hand, we have artists who are coming to uplift the broken spirits of battered Israelis, both Arab and Jew, and to transform ugliness into beauty.

I suggest that we fund the artists, not the confronters.