Now the FBI Is Investigating Your Google Searches. Here's What You Need to Know.

You’d think that with the border wide open and Joe Biden releasing all the terrorists in Afghanistan that the FBI would have a few more pressing issues than word searches.

But you’d be wrong.

In an exclusive report at Forbes entitled “Government Secretly Orders Google To Identify Anyone Who Searched A Sexual Assault Victim’s Name, Address And Telephone Number,” the magazine reports that the feds are using “keyword warrants.” The revelation came from “an accidentally unsealed court document.”

The U.S. government is secretly ordering Google to provide data on anyone typing in certain search terms, an accidentally unsealed court document shows. There are fears such “keyword warrants” threaten to implicate innocent Web users in serious crimes and are more common than previously thought.

[…] There’s more that the government can get with such requests than simple Google account identities and IP addresses. In Wisconsin, the government was hopeful Google could also provide “CookieIDs” belonging to any users who made the searches. These CookieIDs “are identifiers that are used to group together all searches conducted from a given machine, for a certain time period. Such information allows investigators to ascertain, even when the user is not logged into a Google account, whether the same individual may have conducted multiple pertinent searches,” the government wrote.

“Implicat[ing] innocent people in serious crimes” seems to be an FBI specialty these days.

After learning about the role of the Department of Justice, FBI, and intelligence agencies in the Hillary Clinton paid-for Trump-Russia political hoax, the dubious roles of the FBI and its informants in the Gretchen Whitmer kidnap plot and the Capitol riot case, one can only imagine how many innocent people would get caught up in a dragnet like this.

Forbes reports that the keyword investigations were initially used for the laudable goal of finding bad actors involved in domestic sex-slavery cases, but, make no mistake, this kind of warrant is ripe for mission creep.

[S]earch term orders are effectively fishing expeditions, hoping to ensnare possible suspects whose identities the government does not know. It’s not dissimilar to so-called geofence warrants, where investigators ask Google to provide information on anyone within the location of a crime scene at a given time.

The way it works is that the FBI and DHS issue an affidavit to the search engine in question, whether it be Google, Yahoo, or Microsoft, “in the early stages of an investigation,” according to one affidavit, to help the investigating agency develop probable cause to get a warrant against a suspected bad guy. 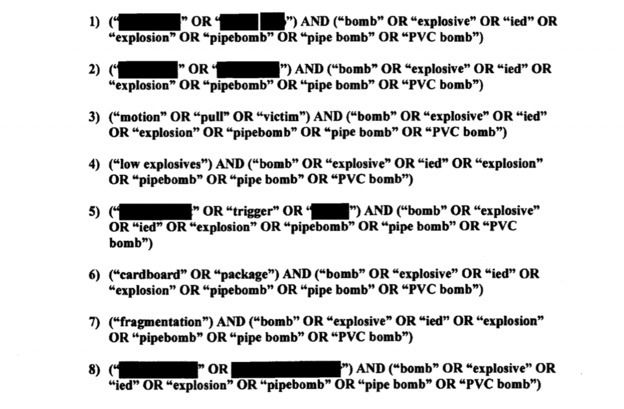 Investigators also generally ask for “cookies,” along with personal and other kinds of information by the search-engine user. Google has a protocol for such requests.

A variety of laws allow government agencies around the world to request the disclosure of user information for civil, administrative, criminal, and national security purposes. Google carefully reviews each request to make sure it satisfies applicable laws. If a request asks for too much information, we try to narrow it, and in some cases we object to producing any information at all.

Here are some incidents in which the feds were discovered to have used keystroke warrants to go after bad guys.

Forbes reported that this gambit by the feds is an invitation to investigate thought crimes.

Recommended: DeSantis Orders Biden to Keep His Federal School Board Cops Out of Florida

The story contains a quote from, of all groups, the ACLU, which apparently remembered what it used to stand for:

“Trawling through Google’s search history database enables police to identify people merely based on what they might have been thinking about, for whatever reason, at some point in the past. This is a virtual dragnet through the public’s interests, beliefs, opinions, values and friendships, akin to mind reading powered by the Google time machine,” said Jennifer Granick, surveillance and cybersecurity counsel at the American Civil Liberties Union (ACLU). “This never-before-possible technique threatens First Amendment interests and will inevitably sweep up innocent people, especially if the keyword terms are not unique and the time frame not precise. To make matters worse, police are currently doing this in secret, which insulates the practice from public debate and regulation.”

Don’t worry, the ACLU will revert to form when the FBI wants to search is for its “domestic terrorist” of the week – school board protesters, trespassers at the U.S. Capitol, people who don’t like masks, or who stick up for a president, or people who don’t want to be forced to get a Covid shot to participate in civic life.

And don’t worry, the FBI can be trusted to respect your rights… just like they respected Donald Trump’s.