How much dishonesty can one tweet contain? A tweet Tuesday by CNN host Jake Tapper about coronavirus was so untethered from the truth that it was a difficult task to determine what was more dishonest, the photo or the message, or all of the above.

After the mercifully long Memorial Day weekend, CNN’s professional coronavirus scold took beachgoers to task for failing to socially distance. And he brought the “receipts,” or so he thought.

In 18 states — including Georgia, Arkansas, California and Alabama — the number of new COVID-19 cases is rising.

Here’s the photo he and CNN used to make the point about increasing numbers of Wuhan virus cases in “George, Arkansas, California and Alabama” due to failing to properly social distance.

In 18 states — including Georgia, Arkansas, California and Alabama — the number of new COVID-19 cases is rising.https://t.co/zGkbgVaN8f

The CNN story Jake Tapper’s links to suggests that those in the above photo were flagrantly disregarding distancing recommendations and causing immediate problems.

This fake news photo, for lack of a better term, certainly was a top reason to nix the tweet. Another was that it led people to believe that Memorial Day crowds, or any crowds, were to blame for increases in the coronavirus in Georgia, Arkansas, California and Alabama. The third thing question is were there increases in those states? And the fourth issue is the photo was taken…in Maryland.

As night follows day, the Ocean City, Maryland Mayor, Rick Meehan, called the photo misleading because he was there and saw what was really happening.

“I think the pictures were a little misleading, taken at low level with lenses looking into the crowd. If you were actually up there in the crowd, it wasn’t really like that, people were separated. I think people did their best to try to stay separated, be courteous.”

With apologies to the Major League Baseball, which is still on the COVID DL, four strikes and you’re out, CNN. Does that result in negative bases?

We’re not so parochial as to think that you can’t use a specific photo to illustrate a more general point, but please stop with the telephoto lens fantasies. Telephoto lenses intentionally compact space, create shallower depths of field while showing the same number of people. In short, it appears that all those people along the boardwalk or beach for thousands of linear feet are crammed into a short space.

The same trick was tried in Jacksonville, Florida with corona crazies demanding the beaches be shut down in that Florida beach town over photographic trickery. These are the people who are the supposed “scienc-y” types, who apparently know nothing about lenses.

And that Georgia data appears to be wrong, Jake and CNN.

Not sure. “Data during the reporting period may be incomplete due to the lag in time between when the case was tested and/or reported and submitted to the Georgia DPH for reporting purposes. This delay can vary depending on the testing facility and/or jurisdiction.”

California’s increased numbers arise from more testing. Fully half the deaths in the entire state of California are in nursing homes where old folks most assuredly did not go to the beach and contract the virus. They’re dying inside a confined nursing facility, sadly, not because they were strolling on the boardwalk.

Alabama’s positive numbers have gone up in the last two weeks, but not hospitalizations or deaths. 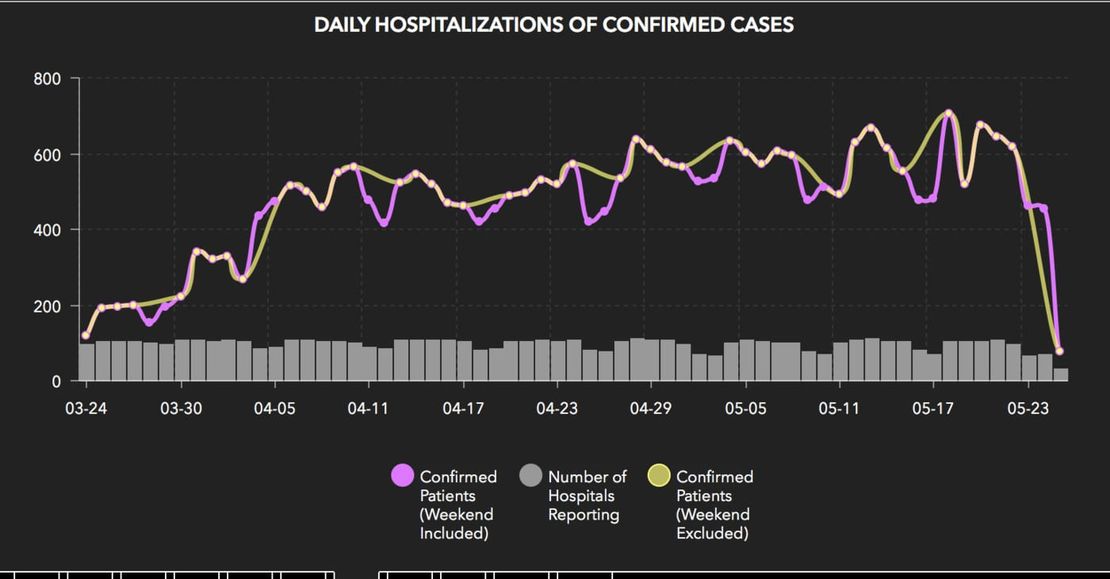 Hey, CNN you do know that more testing results in more positive results but not necessarily more hospitalizations or deaths. Why is this not included in Jake Tapper’s CNN tweet?

Thanks for the disingenuous tweet. What’s really happening is testing is revealing what’s already happened, not new rising going-to-kill-us-all cases. Go check the CDC website, deaths, despite some delays in number reporting, are dropping significantly.

And hasn’t the CDC confirmed that being outside presents a low risk to catching the virus, especially in hot temperatures? Why, yes, yes it has.

When politicians and their constituents see this fake news they demand action and make irrational decisions based on it.

Ask the people who were denied the chance to go to the beaches of Southern California because their governor believed a fraudulent photo taken with a telephoto lens. They had to go to court to reopen them.

So, let’s just stop the stupid.