One of the more insidious aspects of the Democrats’ stranglehold on the mainstream media in American politics is the ungodly amount of cash to be made by Republicans who are willing to turn on their own party and friends. Not just any Republicans, obviously, but politicians (current and former), activists, and — most often — consultants.

I’ve written much in the past about my disdain for the political consultant class. They’re a lot like the ranks of NFL head coaches were for years: they don’t really have to be consistently good at what they do, they just need the one partial success that gets them into the Good Ol’ Boys club then they can stink it up forever and still make money.

The grifter gig was particularly lucrative for turncoat Republicans during President Trump’s first four years in office. The thing about being a useful idiot, however, is that one does not remain useful for long. The kids at the Lincoln Project were put on the “outlived your usefulness” clock as soon as vote counts began looking good for Joe Biden. No matter how this eventually plays out, they know that their days are numbered. It was just a matter of days after the election when one of the Democrats’ loudest voices — Minnesota Rep. Ilhan Omar — called out the face of the Lincoln Project for an old tweet.

There’s no way the Dems didn’t know about that ahead of time. Heck, it seems that all they have their minions doing is combing through people’s social media histories looking for ticking time bombs. The LP was still needed before the election, however. Once it looked like Biden might win, their services were no longer required. Not being able to unseat the extremely vulnerable Susan Collins didn’t win them any favors, either.

In a struggle to avoid rapidly becoming a vestigial tail on the rump of the Democratic Party, the Lincoln Project has turned its attention to attacking President Trump’s legal team.

On Tuesday, the conscience-free LP tweeted out something so egregious that even Twitter couldn’t ignore it and forced them to delete it. Screenshots live forever though: 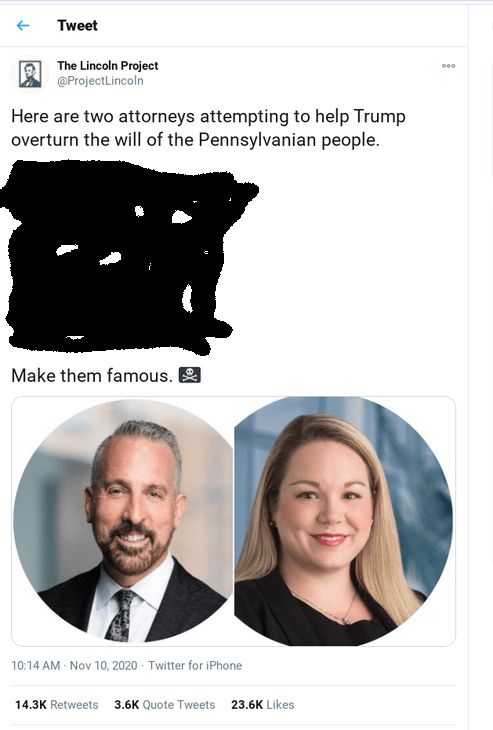 The Lincoln Project no doubt thought it still had some sort of protected status on Twitter like mainstream Democrats do. Sorry boys, the ride is coming to an end.

Yes, the contact info that was provided is a matter of public record, but this is still all kinds of no bueno.

This straight-up harassment of people who are doing what most Republicans in America want them to do is courtesy of some extremely emotionally-challenged people who — and here’s the real laugher — think they are going to be welcomed back to the GOP with open arms and allowed to remake the party.

See? You only have to hang out with the Dems for a few years and everything becomes a pathetic fever dream.

PJ Media senior columnist and associate editor Stephen Kruiser is a professional stand-up comic, writer, and recovering political activist who edits and writes PJ's Morning Briefing, aka The Greatest Political Newsletter in America. His latest book, Straight Outta Feelings, is a humorous exploration of how the 2016 election made him enjoy politics more than he ever had before. When not being a reclusive writer, Kruiser has had the honor of entertaining U.S. troops all over the world. Follow on: Gab, Parler, MeWe
Read more by Stephen Kruiser
Tags: 2020 PRESIDENTIAL ELECTION DEMOCRATS DONALD TRUMP JOE BIDEN REPUBLICANS TWITTER