Attorney General Bill Barr minces very few words and is about as articulate and clear as they come. He has been a standout in articulating what needs to happen to restore law and order in our cities. With ongoing riots in many urban areas, Barr’s recent statements have sent a few clear messages.

First is his support for law enforcement officers as they work to restore order. Second, coordinated instigators resorting to violence and destruction to achieve a political agenda will not be tolerated.

The social compact is dangerously close to being irreparably harmed. One of the few legitimate roles of government at all levels in the United States is to protect citizens from enemies foreign and domestic. Further they are required, to protect the liberty, property and lives of their citizens. As it would be very expensive for me to maintain an army, I pay taxes to ensure my protection.

Governors and mayors across the country have failed in this bargain. Minneapolis burned for three days before the national Guard was activated the evening of May 30th. Social media users watched Chicago police officers being dragged down the street hours before Mayor Lori Lightfoot imposed a curfew and pulled up the drawbridges. And despite burning cop cars in broad daylight Los Angeles, Mayor Eric Garcetti did not call for the National Guard until complete chaos ensued well after dark.

Meanwhile, thousands of business have burned. Cars have been turned over and lit on fire. Terrified residents have lost the places they shopped, worked and banked. All in the wake of an economically crippling few months due to pandemic related economic shutdowns.

The Attorney General is setting the bar at restoring law and order. He recognizes that the anger at the death of George Floyd at the hands of a police officer is justified and had already announced a Department of Justice investigation to the matter. He also applauded the speed with which the criminal justice system was working in Minnesota in charging the officer involved.

In a statement yesterday, he was clear. In the view of the DOJ, there are outside agitators disrupting legitimate protests. Barr said the full resources of the U.S. Attorney offices nationwide and the FBI would be available to assist in the identification and prosecution of individuals crossing state lines to incite violence, which is a violation of federal law:

Following President Trump announcing that Antifa would be designated a terrorist organization, Barr released a separate statement in support. It reiterated the rights of peaceful and legitimate protesters, as well providing security to citizens generally. 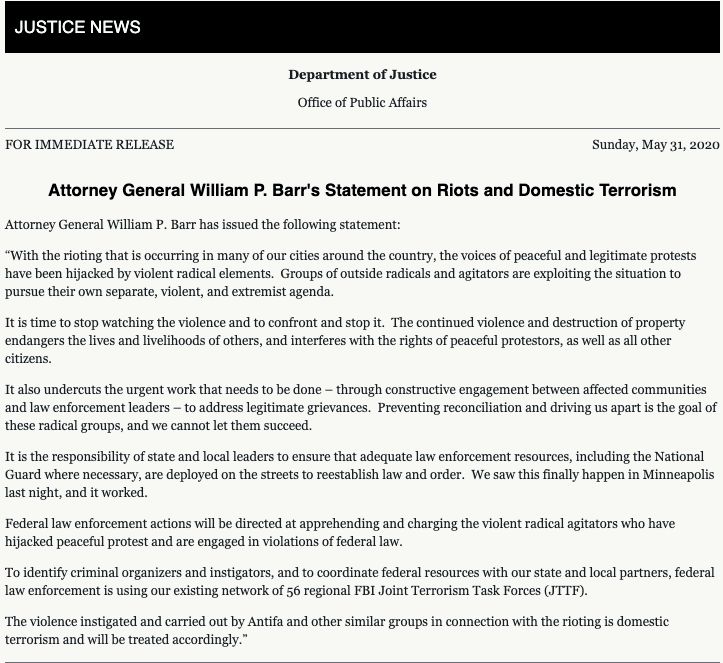 I think the violent rioters (not the peaceful protesters) have met their match with this Attorney General. They're doing themselves– and their organizers/funders– in. I could be wrong. What do you think?

I think she has a point. When you watch videos of the protests from independent journalists and people on the ground, a few things are clear. Groups on the ground are not necessarily aligned. There are dozens of videos where black protesters are admonishing or retraining black clad individuals to prevent property destruction. Videos show many of these black clad individuals carrying professional glass breaking tools and other objects that can do significant harm to property and injure people.

There are medics carrying first aid supplies dressed in all black with a red cross on their clothing. There are also more than a few hammer and sickle graphics on t-shirts and hoodies. Protesters from Dallas showed a pallet of bricks they were directed to that had no business being in the middle of the street.

What I have watched in these clips takes money, advance planning and coordination. Given the apparent youth of many of the rioters, it is not conceivable they are doing this all by themselves. They have not just been funded, they have been trained. I believe the Department of Justice under Attorney General Barr will do a thorough and appropriate investigation and bring those responsible to account. Per today’s statement:

To identify criminal organizers and instigators, and to coordinate federal resources with our state and local partners, federal law enforcement is using our existing network of 56 regional FBI Joint Terrorism Task Forces (JTTF).

The violence instigated and carried out by Antifa and other similar groups in connection with the rioting is domestic terrorism and will be treated accordingly.”

Breaking this organization up is every bit as important as breaking up the Weather Underground was after 1969. The United States has seen enough Days of Rage in the last week to last us for decades.