Tonight at 7 p.m. EST, the Georgia chapter of the Hamas-linked Council on American-Islamic Relations (CAIR) and the Georgia Muslim Voter Project (GAMVP) are hosting a virtual event “to rejuvenate Georgia Muslim Voters,” called a “Senate Runoff Vote-a-Thon.” The event is set to feature a rogues gallery of America-haters, Jew-haters, and radical Left activists, including Reps. Ilhan Omar (D-Mogadishu) and Rashida Tlaib (D-Gaza) and the godmother of the sinister nexus between the hard Left and the Palestinian jihad, Linda Sarsour herself. 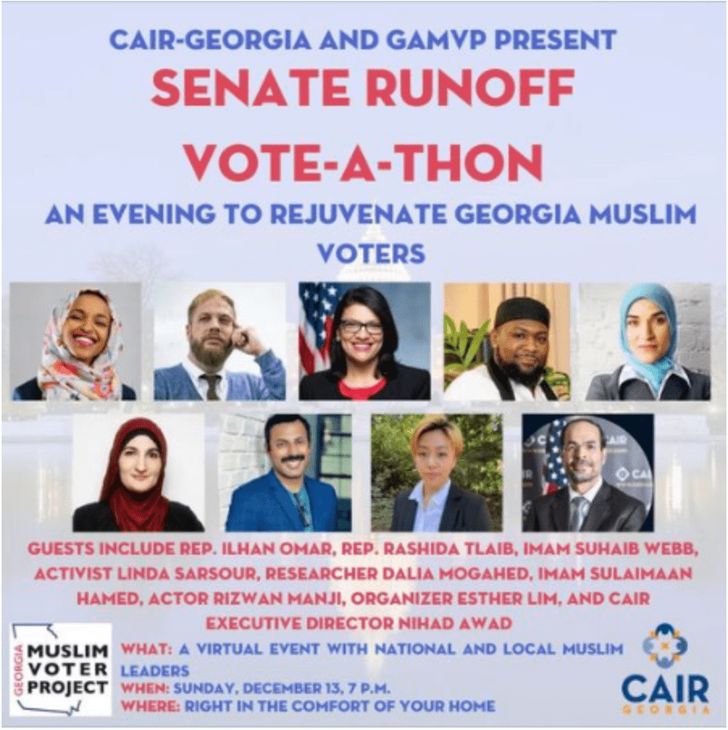 The event is an illuminating indication of the state of American politics today, in numerous ways.

Despite being members of the House of Representatives, Omar and Tlaib know that they will pay no political price for appearing at an event hosted by CAIR. After all, it isn’t as if they were appearing at an event for some really bad organization, such as one that opposed jihad violence and Sharia oppression of women.

In a sane world, however, appearing at a CAIR event would end one’s political career. CAIR is an unindicted co-conspirator in a Hamas terror funding case — so named by the Justice Department. CAIR officials have repeatedly refused to denounce Hamas and Hizballah as terrorist groups. Several former CAIR officials have been convicted of various crimes related to jihad terror. CAIR’s cofounder and longtime Board chairman, Omar Ahmad, as well as its chief spokesman, Ibrahim “Honest Ibe” Hooper, have made Islamic supremacist statements about how Islamic law should be imposed in the U.S. (Ahmad denies this, but the original reporter stands by her story.)

Even worse, CAIR chapters frequently distribute pamphlets telling Muslims not to cooperate with law enforcement. CAIR has opposed virtually every anti-terror measure that has been proposed or implemented and has been declared a terror organization by the United Arab Emirates. CAIR’s Hussam Ayloush in 2017 called for the overthrow of the U.S. government. CAIR’s national outreach manager is an open supporter of Hamas.

CAIR is also linked to the Muslim Brotherhood, which has the stated goal (according to a captured internal document) in America of “eliminating and destroying Western civilization from within, and sabotaging its miserable house.” In light of that, this Georgia event is extremely interesting. Likewise interesting are some of the other speakers, which include the imam Suhaib Webb, an American convert to Islam who has served as the imam at the Islamic Society of Boston, which the Boston Marathon jihad bombers attended. In December 2017, Webb retweeted a tweet by the atheist Islamic apologist C. J. Werleman, saying that it is “impossible to argue the United States is not the greatest source of evil in the world today.” At a 2013 CAIR event, Webb called secularism a “lunatic ideology,” raising questions about his commitment to the First Amendment principle of the non-establishment of religion – questions that he is certain never to be asked by any establishment media “journalist.”

Webb’s fellow speaker Linda Sarsour is also an unapologetic defender of Sharia. As far back as September 22, 2011, Sarsour tweeted: “shariah law is reasonable and once u read into the details it makes a lot of sense. People just know the basics.” Her position didn’t change over time. On May 12, 2015, she tweeted: “If you are still paying interest than Sharia Law hasn’t taken over America. #justsaying.” And on April 10, 2016, Sarsour tweeted about Sharia again: “Sharia Law is misunderstood & has been pushed as some evil Muslim agenda.”

Sarsour tweeted on March 8, 2011: “Brigitte Gabriel = Ayaan Hirsi Ali. She’s asking 4 an a$$ whippin’. I wish I could take their vaginas away – they don’t deserve to be women.” This call for physical violence against someone she hated was a harbinger of things to come, but it received no notice among her sycophants on the left. After all, why would it? They’re committed to the same violence.

CAIR’s cofounder and longtime executive director, Nihad Awad, is also speaking. Back in 1994, Awad said: “I am in support of the Hamas movement.”  In 1998, Awad claimed that Jews controlled American foreign policy. Now, few of us would likely want to have statements we made over two decades ago thrown back at us, and maybe Awad by now is as moderate as the day is long, but it’s once again telling: if one of their fellow speakers had in 1994 and 1998 expressed skepticism at the idea that Islam is a religion of peace, and a determination to oppose jihad violence, would Omar and Tlaib be speaking at the same event with him now? Of course not. They would be denouncing him as an “Islamophobe” and demanding that he be dropped as a speaker.

But this event will go off without a hitch and win plaudits from the establishment media for the involvement of Muslims in politics. But the apparent fact that Georgia Democrats are welcoming assistance from this unsavory group is telling enough in itself.

Robert Spencer is the director of Jihad Watch and a Shillman Fellow at the David Horowitz Freedom Center. He is author of 21 books, including the New York Times bestsellers The Politically Incorrect Guide to Islam (and the Crusades) and The Truth About Muhammad. His latest book is Rating America’s Presidents: An America-First Look at Who Is Best, Who Is Overrated, and Who Was An Absolute Disaster. Follow him on Twitter here. Like him on Facebook here.