Democratic House Speaker Nancy Pelosi fancies herself a true colorblind American, a friend to all oppressed minorities. She’s also a politician, so she reached out and congratulated the “Say Hey” kid, Willie Mays, on his 90th birthday. 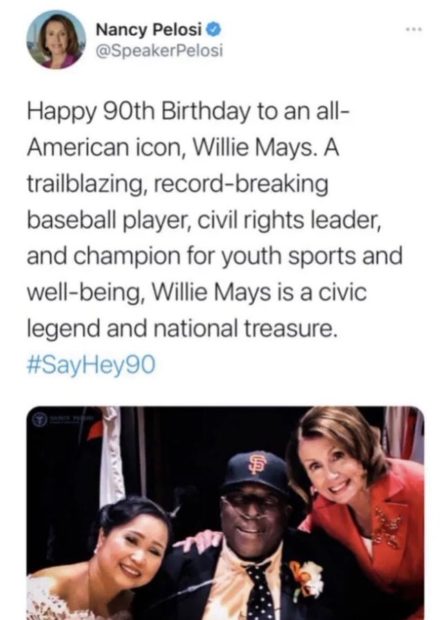 The beloved Mays, perhaps the greatest player to ever put on spikes, deserves all the love and approbation sent his way on a very significant birthday. I’m sure Pelosi felt a warm feeling after sending it.

There’s only one small problem. The picture Pelosi sent out to her 7 million followers on Twitter was that of another Hall of Fame Giants great, Willie McCovey.

In a statement to KCBS radio, Pelosi’s office blamed the mistake on a staffer.

“A staffer inadvertently selected the wrong photo for the tweet. The photo we wanted to use was of the Speaker and Willie Mays at Willie McCovey’s August 2018 wedding. The quickly deleted photo was the wrong photo from the right wedding. We apologize for the error.”

It’s surprising that Pelosi didn’t mention how clean Mays looks and how articulate he is.

It’s an honest mistake and we shouldn’t pile on Pelosi. It’s understandable if she thinks all black guys look alike. It’s a common error of many white people her age. Before too long, someone will be tweeting her their congratulations on becoming a nonagenarian (Pelosi just turned 81). Let’s just hope they don’t tweet out a picture of Harriet Tubman by mistake.