Civil forfeiture is not a popular government activity. For those of you who don’t know, civil asset forfeiture according to the ACLU “allows police to seize — and then keep or sell — any property they allege is involved in a crime. Owners need not ever be arrested or convicted of a crime for their cash, cars, or even real estate to be taken away permanently by the government.”

If that sounds crazy to you, I assure you, it’s real. I don’t know how it’s real, because it’s certainly not constitutional—who needs the Fourth Amendment, am I right?— but it is real.

The Dallas Police Department stepped in a hornet’s nest on social media when they posted a braggadocious photo of a seizure of $100,000 in cash. Police confiscated the haul at Dallas Love Field Airport and then posted the photo on social media. The local CBS station picked it up and wrote a glowing article about it. I guess they thought the photo of an adorable German Shepherd (good boi!) standing over piles of cash he found with his incredibly smart and furry nose would make everyone forget that the police just robbed someone…legally. It didn’t work.

High praise for a K-9 officer at Dallas Love Field Airport after more than $100,000 was found in a passenger's luggage. https://t.co/lJoDg5lWfh pic.twitter.com/sA1unHSCCB

The accompanying report indicated that the woman was not arrested for anything—police couldn’t find a crime—but they took her money anyway. If she wants it back, she’s going to have to spend the next decade in court fighting and probably spend more than $100,000 on lawyers. Oh, beautiful for spacious skies, for amber swarms of officers to harass our people and eat out their substance…

On December 2 the canine — named ‘Ballentine’ — alerted on an individual checked suitcase. It turns out the bag, that belonged to 25-year-old woman from Chicago who was on a layover at the airport, contained blankets and two large bubble envelopes filled with $106,829 in cash.

The woman who owned the bag was not arrested, but the money was seized and police say it will be subject to the civil asset forfeiture process.

For those of you who I know will say in the comments that it’s “suspicious” to travel with this amount of cash, I say being sus is not grounds for seizure. Cops should have to get a warrant for that. We should do everything in our power to make it impossible for the state to lock us up in prison for crimes they think we might have committed. If there’s no evidence of a crime, they shouldn’t be allowed to just seize your property and force you to spend all your resources fighting to get it back. Civil asset forfeiture abuse is rampant. The ACLU reports:

In Conway, South Carolina, a 72-year-old widow hides inside, her curtains drawn, fearing that local law enforcement will attempt to take away her home for a third time. Ella Bromell has never been convicted of a crime. So how has her house been at risk of seizure for over a decade?

Why? Because her neighbors may have sold drugs in her front yard while she was sleeping. I kid you not. An investigative series called TAKEN! published in the Greenville News details horrific abuses of civil forfeiture, which was supposed to cripple mafia or other drug-related organized crime but seems to be used mostly to terrorize innocent people and make police departments rich.

RELATED: Bags of Cash and Checks Found in the Walls of Joel Osteen’s Megachurch

When a man barged into Isiah Kinloch’s apartment and broke a bottle over his head, the North Charleston resident called 911. After cops arrived on that day in 2015, they searched the injured man’s home and found an ounce of marijuana.

When Eamon Cools-Lartigue was driving on Interstate 85 in Spartanburg County, deputies stopped him for speeding. The Atlanta businessman wasn’t criminally charged in the April 2016 incident. Deputies discovered $29,000 in his car, though, and decided to take it.

The list of abuses is long. In South Carolina, the state doesn’t even have to prove that the property they stole was the profit from a crime! They use the low civil standard of a preponderance of evidence to keep the property they take. And how do you fight a legal battle when the cops have confiscated your life savings? You don’t.

Read the whole report if you have taken your blood pressure meds or have meditated recently.

As for the Dallas Police Department, well, they’re getting roasted and deservedly so. Here are a few of my favorite comments. Missouri state Representative Tony Lovasco said, “It is not a crime to possess $100,000 in cash. It is not a crime to take cash on an airplane. This woman has not been charged with any crime. [CBS] is writing a puff-piece about a dog aimed at distracting the fact that government agents literally robbed someone.”

The Libertarian Party of Texas got in on the chastisement too, writing, “This is theft, and you are glorifying it. The passenger was not charged with a crime, the officers stole that money. Write the story about the criminal officers, not the dog who helped them.”

Then there were the memes: 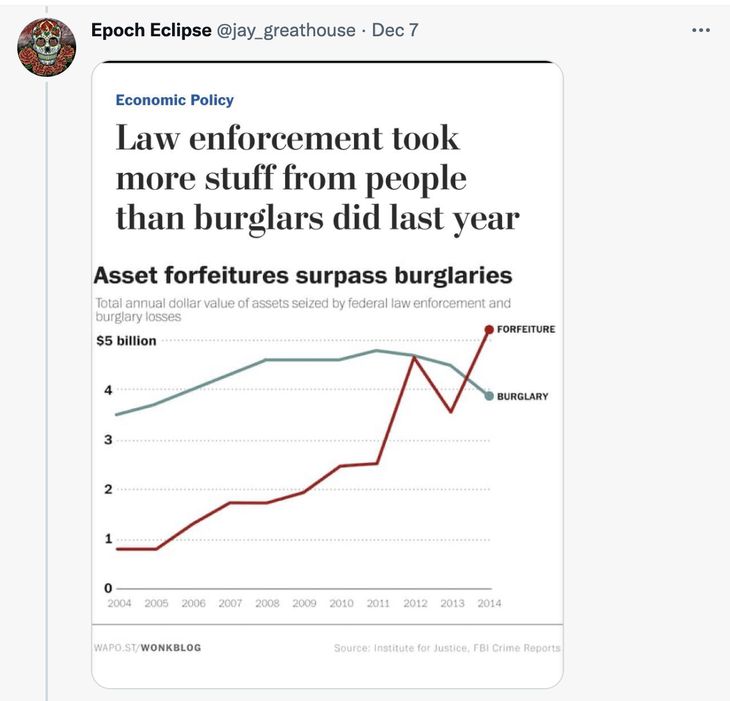 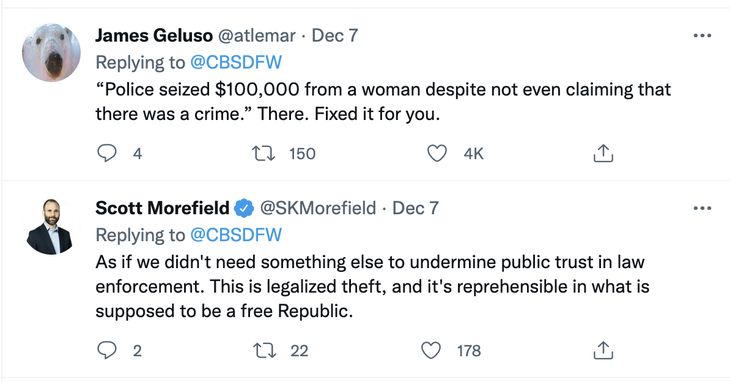 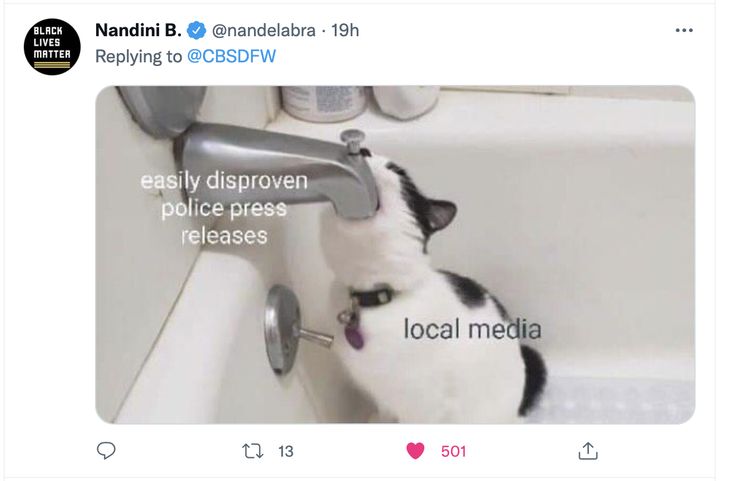 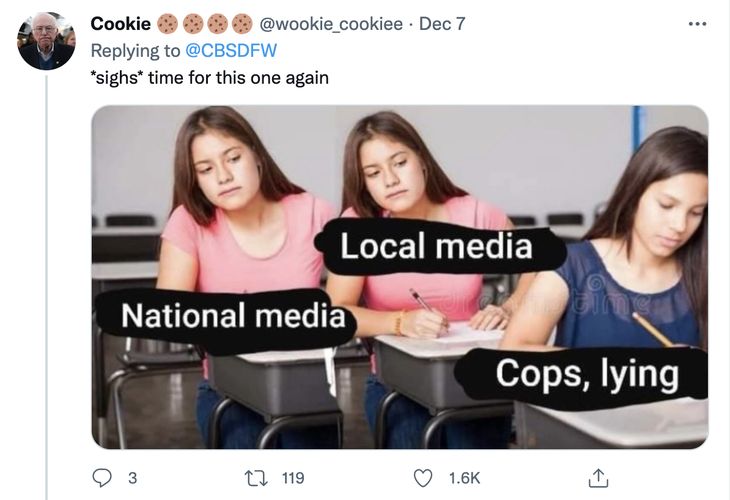 Todd Davidson had the exact same reaction I did. Why doesn’t someone at CBS ask any follow-up questions to the police? “HOLY HELL ask a damn follow-up question. ‘If no crime was committed, then why did you take the money?… Isn’t it theft to take money from people?… Why does this civil forfeiture law exist?'” 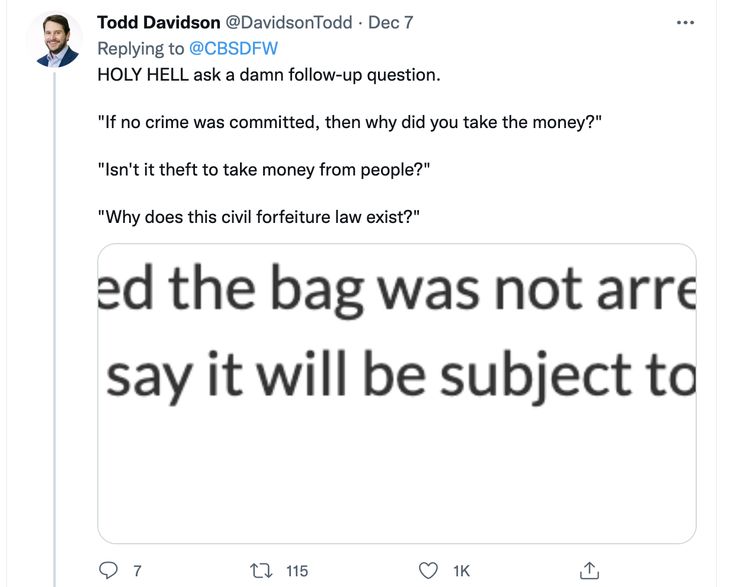 If you ask me, civil forfeiture should be a thing of the past. There’s no justification for it other than to create wealth in the government sector from the backs of citizens who most likely aren’t guilty of anything. This is not how a free country is supposed to operate.