If you thought you were going to be able to avoid putting technology for contact tracing on your iPhone, Apple has made that decision for you and the answer is, you will. The next update for iOS is 13.5 and it comes already loaded with contact-tracing technology. 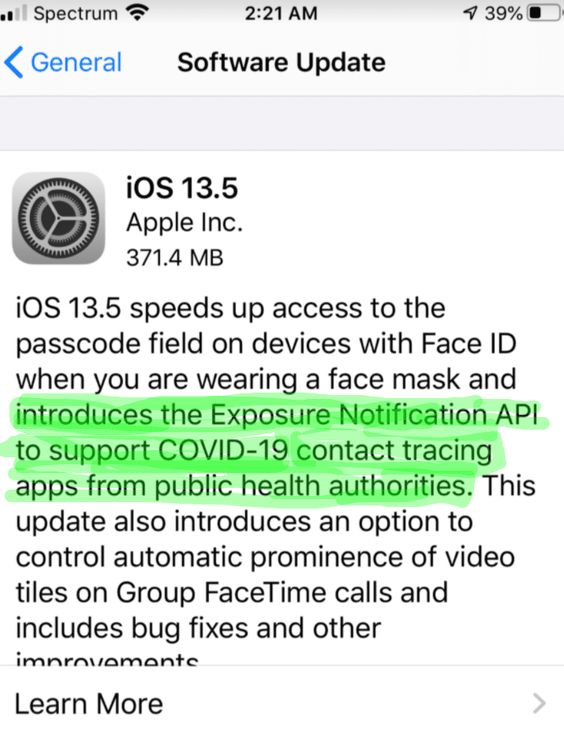 Tech Crunch has the story.

Apple  and Google  today made available the first public version of their exposure notification API, which was originally debuted as a joint contact-tracing software tool. The partners later renamed it the Exposure Notification system to more accurately reflect its functionality, which is designed to notify individuals of potential exposure to others who have confirmed cases of COVID-19, while preserving privacy around identifying info and location data.

The launch today means that public health agencies can now use the API  in apps released to the general public. To date, Apple and Google have only released beta versions of the API to help with the development process.

The tech is not an app, but lays the foundation for contact-tracing apps to utilize the technology

To be clear, this launch means that developers working on behalf of public health agencies can now issue apps that make use of it — Apple and Google themselves are not creating an exposure-notification or contact-tracing app. The companies say that many U.S. states and 22 countries across five continents have already asked for, and been provided access to, the API to support their development efforts, and they anticipate more being added going forward. So far, Apple and Google say they have conducted more than 24 briefings and tech talks for public health officials, epidemiologists and app developers working on their behalf.

Contact tracing leads to forced incarceration and deprivation of rights

There is no shortage of horror stories surrounding the COVID-19 panic but the worst are the stories of people who have been detained without attorneys or rights based on governors’ orders. One man in Monroe County, New York, was forcefully incarcerated because he refused to get tested for coronavirus and had symptoms of a cold. He was jailed for fourteen days and released. He did not have COVID-19.

Contact tracing is baed on the theory that in order to defeat a virus, the government has the right to interrogate you and anyone you’ve had contact with if they suspect you’ve been exposed. Then they incarcerate you without due process and strip you of your right to an attorney. This cannot possibly be legal, but until it is challenged in court by someone with legal standing, your local health officials are behaving like college coeds on spring break drunkenly urinating all over the People’s rights as if they don’t exist. Party on, bureaucrats!

Leave it to enterprising people to have come up with a way to thwart this massive invasion of privacy before most of us have even had to download it. Deleting the tech is not possible, but disabling it is. 9to5mac.com is here for us dissenters.

Note: The “COVID-19 Exposure Logging” toggle is disabled by default in iOS 13.5. This does not collect any data without you installing and authorizing a local health authority app, which will be available soon. Apple and Google’s exposure notification system will be completely opt-in.

How to turn on/off COVID-19 contact tracing on iPhone

There is a helpful visual guide on the site.

Megan Fox is the author of “Believe Evidence; The Death of Due Process from Salome to #MeToo,” and host of The Fringe podcast. Follow on Twitter @MeganFoxWriter