Joe Biden Is Still Lying About COVID-19 Vaccine Distribution. Here Are the Facts.

Joe Biden, who claimed repeatedly during the 2020 election campaign that he would be a uniter, desperately wants you to give him credit for the unprecedented pace of COVID-19 vaccine development.

In fact, the plan for Biden to take credit for it started before he even took office.

Less than a week before the inauguration it was announced that the incoming Biden administration would rename Operation Warp Speed, the Trump administration initiative that resulted in two COVID vaccines authorized by the FDA before Trump left office, and a third vaccine a couple of months later. Trump’s initiative delivered an FDA-authorized vaccine five times faster than the fastest prior vaccine development in history.

In conjunction with the rebranding of the initiative, a concerted effort by incoming Biden administration officials began to trash the vaccine distribution plan left by the Trump administration. Some, including Kamala Harris, have claimed that there hadn’t been a plan at all—a claim debunked by former Operation Warp Speed officials.

On Thursday night during his first primetime address since taking office, Biden once again tried to take credit for the COVID-19 vaccine’s development and distribution.

“Two months ago this country didn’t have nearly enough vaccine supply to vaccinate all or anywhere near all of the American public, but soon we will.”

This is completely false.

An additional 100 million doses of the Pfizer vaccine were purchased by the Trump administration on December 23.

That comes to at least 400 million vaccine doses from Pfizer and Moderna ordered by the Trump administration before Joe Biden took office. The population of the United States is 331 million people. Both of these vaccines are a two-dose shot, meaning that the Trump administration had ordered enough vaccines to innoculate 60 percent of the United States population before Biden even took office.

Yet that’s not the full picture. Consider this: Pfizer’s vaccine has only been authorized for Americans 16 and over, and Moderna’s for adults 18 and over. That means these vaccines are authorized for approximately 78 percent of the population (based on Census data), which means before Joe Biden took office, there had been enough vaccines ordered and in production to vaccine 77 percent of the population old enough to be vaccinated. Yes, I did the math.

But, according to Joe Biden, before he took office there wasn’t enough vaccine supply to vaccinate “all or anywhere near all of the American public.”

“Now, because of all the work we’ve done, we’ll have enough vaccine supply for all adults in America by the end of May. That’s months ahead of schedule.”

This is arguably no different from the timeline offered by Trump, who promised there would be enough vaccine doses for “every American” by April. “Hundreds of millions of doses will be available every month and we expect to have enough vaccines for every American by April and again I’ll say even at that later stage, the delivery will go as fast as it comes,” Trump said back in September when his vaccine distribution plan was unveiled.

Not once did Biden give credit for the historic work done in the Trump administration.

Yet, Biden wasn’t done with the lies.

Biden’s vague reference to the timeline of vaccinations ignores the fact that the Pfizer vaccine was authorized on December 11, meaning that the Trump administration had only five weeks to roll out and begin vaccinations, yet succeeded in getting over 16 million doses administered

To hear Biden tell the story, one might assume that vaccinations were hobbling along before he took office, but this is simply not true.

In fact, COVID-19 vaccine distribution has followed the same trajectory under Biden as it was under Trump. 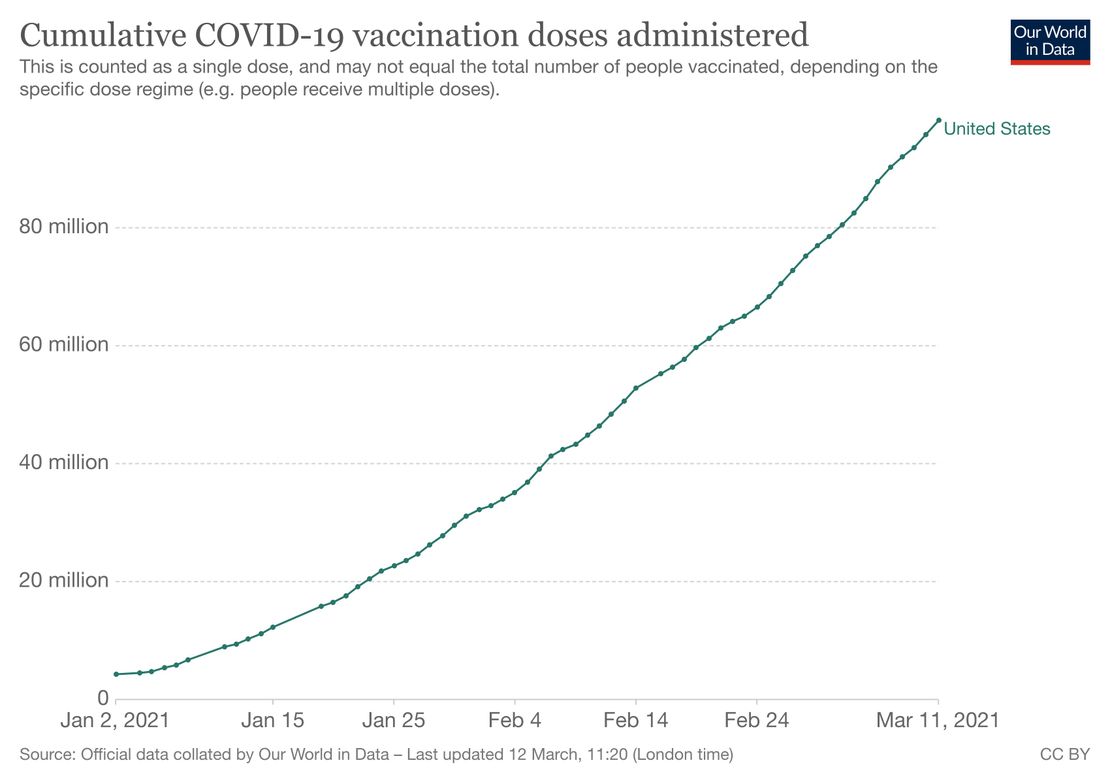 Do you think Biden was done with the lies? Guess again.

“When I came into office, you may recall I set a goal that many of you said was kind of way over the top. I said I intended to get 100 million shots in people’s arms in my first 100 days in office,” Biden said.

“They’re trying to gaslight you,” Crenshaw added. “[Biden administration officials] are not telling the truth here. There’s always been a good plan in place.”

Nevertheless, Biden sought to pat himself on the back to reach a goal that was met before he even took office.

“Tonight, I can say we’re not only going to meet that goal, we’re going to beat that goal,” Biden said. “Because we’re actually on track to reach this goal of 100 million shots in arms on my 60th day in office.”

Biden’s speech Thursday evening was simply his latest and most daring attempt to take credit for COVID-19 vaccine development and distribution. It is insulting to the thousands of people who worked tirelessly under Operation Warp Speed to deliver a vaccine in historic record-breaking time, and a shameful attempt of rewriting history in the hopes that the Trump administration gets none of the credit.

Matt Margolis is the author of Airborne: How The Liberal Media Weaponized The Coronavirus Against Donald Trump, and the bestselling book The Worst President in History: The Legacy of Barack Obama. You can follow Matt on Twitter, Gab, Facebook, MeWe, Heroes, Rumble, and CloutHub.

Matt Margolis is the author of Airborne: How The Liberal Media Weaponized The Coronavirus Against Donald Trump, and the bestselling book The Worst President in History: The Legacy of Barack Obama, and The Scandalous Presidency of Barack Obama. You can follow Matt on GETTR, Truth Social, Twitter, Facebook, MeWe, Gab, and Rumble. News tips, praise, hate mail, and media inquiries can be sent to [email protected].
Read more by Matt Margolis
Tags: JOE BIDEN
SHOW COMMENTS