Top Five Statues We Should Tear Down Next

In 2020, every day is stupider than the day before. Every time you think society has reached Maximum Dumbness, the very next day you realize that you just weren’t thinking big enough. In the latest would-be nadir of nincompoopery, America has found the source of all our problems: statues.

Suddenly, everywhere you look, somebody is tearing down an old statue, or spray-painting the latest woke hashtag on a statue, or writing a thinkpiece about how a statue that literally never hurt anybody is suddenly bad and must be destroyed. It started with Confederate monuments, which you may or may not care about one way or the other. But now the phenomenon has moved with lightning speed to encompass pretty much any dead person whose likeness has been captured in bronze. A wise man once said: “Those who do not remember the past are condemned to repeat it.” Now we’ve got a precursor to that: “Those who Google a historical figure for signs of racism are compelled to destroy any evidence of his existence.”

Sure, George Washington and Abraham Lincoln and Teddy Roosevelt were obviously evil racists and should be blotted out of history. But why stop there, when there are so many statues just waiting to be obliterated by angry vandals? Here are five more statues we should tear down ASAP.

About 10 years ago, the town of Celeron, NY put up a statue of I Love Lucy star Lucille Ball to commemorate the fact that she lived there for a few years as a kid. Unfortunately, the statue didn’t resemble Ball in the least. It looked more like noted character actor Walton Goggins: 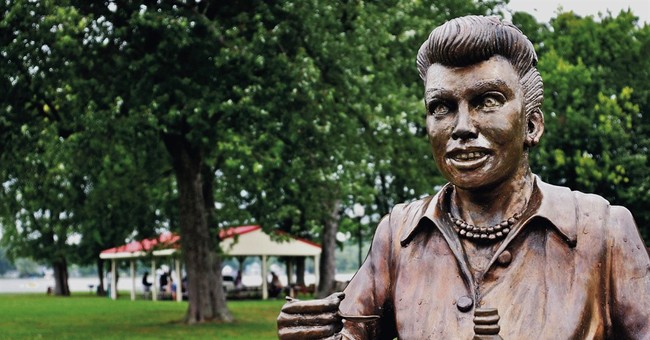 The town has since replaced the statue with something that actually looks like her:

That was an improvement, at least under our old historical standards. Unfortunately, now we know that statues of dead white people are racist, no matter what. So now it’s gotta go.

If you need a pretext, consider the way Ball humiliated Brown people by marrying one of them, then forcing him to reinforce negative stereotypes about the Hispanic community:

Lucy’s TV show was in black and white, but reality isn’t. For her crimes against Latinx people everywhere, her statue must be torn down.

The legendary guitar hero was killed in a helicopter crash in 1990, which qualifies him for two things: 1) Having a statue erected in his honor, and 2) Having that statue torn down for some reason.

This is a good start:

Someone vandalized the statue of Stevie Ray Vaughn in Austin. What’s the point of this? pic.twitter.com/1y6imuvzB2

The “FTP” graffiti stands for “F*** The Police,” which is a minor error in research because Andy Summers was that band’s guitarist. Nonetheless, Vaughan once opened for The Police in 1984, so he was a cop-lover by proxy. Plus he was a white man who wore a Bolero hat and played guitar like Jimi Hendrix, which was cultural appropriation on two fronts. SRV is SOL. Tear that $#!+ down.

He beat up black people for a living. Any questions? Didn’t think so.

(And no, Balboa’s current association with Apollo Creed’s son doesn’t make up for it. Rocky isn’t an ally, because he still openly disagrees with Adonis Creed and tries to tell him what to do. That makes him a white supremacist. If you don’t like hearing that, you need to check your white fragility.)

Do I really need to explain why a white guy from outer space isn’t somebody we should celebrate? White supremacy isn’t just a global phenomenon, it’s an intergalactic one. You don’t need to be as smart as Lex Luthor to realize that the Superman statue in Metropolis, Illinois, must be toppled for the good of the planet.

Selfies are popular in Metropolis! Tag your photos with #supercityselfie to show the world your super time!

Besides, the torch has already been passed to the real superhero.

We have a winner!: here's Alex Ross' super heroic portrait of President Obama (from 2008):

Finally, we bring it right back where this whole thing started: Minneapolis. Decades before a multiracial group of MPD officers killed George Floyd, The Mary Tyler Moore Show was praised for bringing the message of modern feminism to a weekly audience of millions. Looking back on the show now, though, all you can see is how white it all was.

Yeah, Gordy Howard (John Amos) was at WJM for a while, but then the show got rid of his character. Wonder why, hmmmm?

It’s a disgrace that Minneapolis has a statue of “Mary Richards” flinging her tam o’shanter into the air in a fit of white privilege. Even putting aside the overwhelming whiteness of the show, her hat itself is of Scottish origin and therefore racist. It’s just about the whitest thing that has ever happened in the history of whiteness, and it must be removed before the rest of the city is burned to the ground.

That’s just five racist statues off the top of my head. This list could easily be 10 times as long. Find me a statue, and I can find you a rationalization for an angry mob to tear it down. And mainstream “journalists” will find some way to condone it.

(NOTE: This post is a joke and nobody should tear down these statues nor any others. Please don’t be an idiot.)